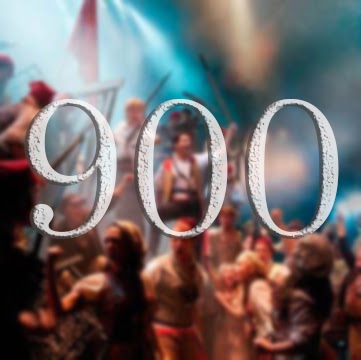 When I started the Middle Age Bulge blog, I didn't set out to write a certain number; I wanted to lose weight - simple as that.  In the process of writing about my quest to shed pounds, I discovered that I had lots of other things to write about, so I just carried on.

For the most part, the writing usually happens between 6:30 am and 7:30 am, the magical hour when the house is silent, before everyone else wakes up.  Of the 900 posts since I began in late 2009, probably ninety-percent were crafted early in the day.  I have always been more of a morning person, and find it much easier to be creative with the day's first cup of coffee close at hand.

Each post offered its own set of lessons: literary discoveries, wisdom about human nature, and knowledge about myself.  While I had lots of interesting suggestions of what to write about in this 900th post, I think I will share some of the things I've learned about blogging, both as a reflection exercise and a compendium of lessons that might prove useful to you, the reader.

Lesson 1
There is always something to write about

In the early days of this blog, it was an effort to come up with something to write about.  Creatively stuck, I would force myself to pull something out of the air and just start typing.  That discipline has served me well, as I now find myself with too many ideas and not enough time to get them down.

Someone asked me the other day if I go to bed knowing what I will write about in the morning.  What a great question.  The answer would be both yes and no.  During the "To the Barricades" blog series, I generally knew what would get me started before I even left the theatre.  Once in awhile, I meander in my mind in the moments before drifting off to sleep, thinking of an opening sentence or a title.  Having a blog in mind makes getting up the next day much easier.

On the occasions when the canvas is blank, I just trust that something will pop up in that walk from my study to the kitchen to grab my coffee and back again.  Something always does.

Lesson 2
Metrics matter (to me)

I diligently watch the numbers of how many people read my blog posts.  I'm fascinated by what attracts readers and what doesn't.  Generally speaking, I do two things to promote a post.  I put a link on my personal Facebook page and send out one tweet.  Depending on the content of the post and the strength of the hook, I will be able to tell whether or not the post has found an audience within minutes.

In watching the stats, I've learned that the moment I go negative or controversial, the page views soar.  I've also learned that posts that are particularly heartfelt attract a healthy readership.

I'm consistently tickled to find out that people read what I write.  During the Les Mis process, I heard from a number of participants and parents that they religiously started their day by reading what I had written about the day before.  I get the sense that the page view stats indicate a lot more than just a quick visit; it seems that a certain number of people actually spend quality time reading what I have written.

Lesson 4
Be prepared for backlash

During my short political career, there were a number of posts that became news, and incited a strong reaction.  In one case, opponents to a view that I was espousing used the comments feature to launch a sustained counter offensive.

I have chosen not to filter the comments, by using the feature that would let me prescreen them before   allowing them to be posted.  You might make a different choice if you have an inkling to dive into the deep end on hot button issues.  It is not comfortable being the fulcrum of an emotional and contentious issue.

Lesson 5
Blogs can make a difference

In putting your thoughts and ideas into the world via a public blog, you can inspire change.  It doesn't happen often, but once in awhile someone will share with me how a post helped them make an important decision, gave them a vital piece of information, or changed their perspective on an issue.  Think about the impact that Theresa Wells has made with her McMurray Musings blog and its 500,000+ page views.  Bloggers are a force to be reckoned with in this social media age.

Having done three blog serials, one for each of the theatre productions I've been involved with over the last three years, I can tell you they are highly effective.  The most recent "To the Barricades" series, chronicling the process of putting together Les Mis, ended up being 35 posts written by me and one final one containing the reflections of over half of the participants.  It's a great way of archiving and sharing a collective journey, providing a behind-the-scenes narrative of what goes into creating something amazing.

Whether a play production, a playoff run, or any other project or process that has a beginning, middle and end, a blog serial is a great way to capture and share the story.

There are many blog posts that I wrote but never published because my gut was warning me not to.  The most recent one was during the Neil Young "Fort McMurray is like Hiroshima" situation.  I made several attempts at articulating an opinion that added value to the discussion.  Each time I tried, something caused me to hold back.  It was probably my own recognition that what I had to say was more repetitive than additive.

My gut also told me to write about the pedestrian bridge shortly after the election.  That didn't go over well with a certain constituency, but it wouldn't have felt right to stay silent on something that I felt so strongly about.

Your body is a great resource in terms of what you should and shouldn't post.  But you have to pay attention to what it is telling you.

I could look at a post dozens of times and still miss spelling or sentence structure issues.  Typically, my best defence against posting something that is peppered with mistakes is to read it aloud several times.  Unfortunately, blog writing is a rather solitary pursuit, and employing an editor isn't a viable option.

If someone spots an error and shares it with me, I have no qualms about going back into a post and fixing it up.  Dylan is particularly good at pointing out my mistakes.

Lesson 9
It feels good to be creative

It's nice to break the pattern and post something a little different from time to time.  Scattered among the 900 are poems, stories, lists, paintings, and various other things designed to shake things up.  As this is my blog, there are no rules other than the ones I set for myself.  Writing a blog should be fun, something you look forward to.  Sitting down to write a blog post early in the morning, with a hot cup of coffee, is my favourite way to start the day.

The posts that have resonated the most are the ones that have an element of vulnerability.  People are interested and attracted to real moments, genuine emotion (good and bad), and truth.  They are not interested in writing that is muted by a shallow veneer.  They want the real deal, even if they don't necessarily agree with my point of view or philosophy.

I'm deeply grateful to all the readers of the Middle Age Bulge blog.  I especially appreciate when you go out of your way to mention that you are a regular reader.  It means the world to me to know that these words, purposefully put together, are being regularly consumed and enjoyed.

I thought it would have been fun to have shared the list of the 10 most read blog posts.  However, of the grouping of posts - each with over 1000 page views - only two of them were ones that attracted a legitimate readership:  "Slave Lake is Burning" (May 16, 2011) and "Sandbagging - Fort McMurray Flood" (June 13, 2013).  The rest contained words, phrases or images that magically appeared near the top of a Google search.  For instance, "The Big Bang Theory" (January 8, 2012) contained a photo that appeared on the first page of a search that generated over 900,000,000 hits.  Something similar happened with "Royal Wedding" (April 29, 2011).  It happens purely by accident, but when a photo embedded in a blog post appears high in the search - usually for only a few short days or weeks - it brings a lot of unsuspecting blokes to my blog.  Sadly, they are not likely to read anything while they are there.

I went back to look at some of my earlier posts, the first couple of hundred.  It surprised me to find what I thought were well-written pieces that attracted less than a handful of page views.  Others, well-tagged and containing universal themes or pop culture references, did very well. I suspect that if I were to go back and appropriately tag older posts, that all of a sudden they might appear in search results.  But who has the time?

I have been through a course 900 lessons long and it is called the Middle Age Bulge blog. It is a learning journey that could continue for years, as writing has become like breathing: an absolute requirement for living.
Email Post