"Everyone who is excited about the Games, please put up your hand," asked one of the directors of the host committee during the Bronze I meeting earlier today.  "I count about 100 hands.  We will need about 2,900 more sets of hands by the time we get these games off the ground."

It was telling exercise, putting into human terms what is going to be required to pull off the 2015 Western Canada Summer Games.  Scheduled from August 7th to 16th next year, the celebration will include 2,500 athletes and some 300 officials.  According to Sport Canada, for each athlete traveling to the region, we can expect between 3 to 5 family and friends to follow.  Simple math suggests that we could swell in population by as many as 14,000 souls during these magical 10 days in August.

In the room today were directors, chairs and Games staff members who form the leadership circle for what promises to be a mammoth undertaking and a marvellous opportunity to nurture many of thousands of new ambassadors for Wood Buffalo.

The athletes and officials should be blown away the moment they get off the buses and unpack at the athletes village located at Noralta Lodge, 17 kilometres out of town, on the other side of the highway from Suncor.

"This will be an Olympics standard athletes village," said Kim Rizzi, Games General Manager.  "This is going to be the best athlete accommodations I have ever seen in 25 years of doing this."  Usually put up in retrofitted dorm-like settings, sharing space with groups of people, each athlete is going to have their own room, a television and WiFi access.

As each functional area - from Finance and Administration to Safety and Security, from Food Services to Transportation - introduced their scope of responsibility, it became crystal clear where the 3,000 volunteers number came from.  This is a complex, integrated, and comprehensive organizational structure that will require all hands on deck in the summer of 2015, and many of the months between now and then.

It was fitting and synergistic that my opening exposure to the Games was followed immediately by a guided tour of Shell Place.  Tim Reid, CEO of the RRC (Regional Recreation Corporation) took a group of 10 of us on a walking tour of the under construction facility that will play a leading role when we welcome athletes from 4 western provinces and 3 territories next year. 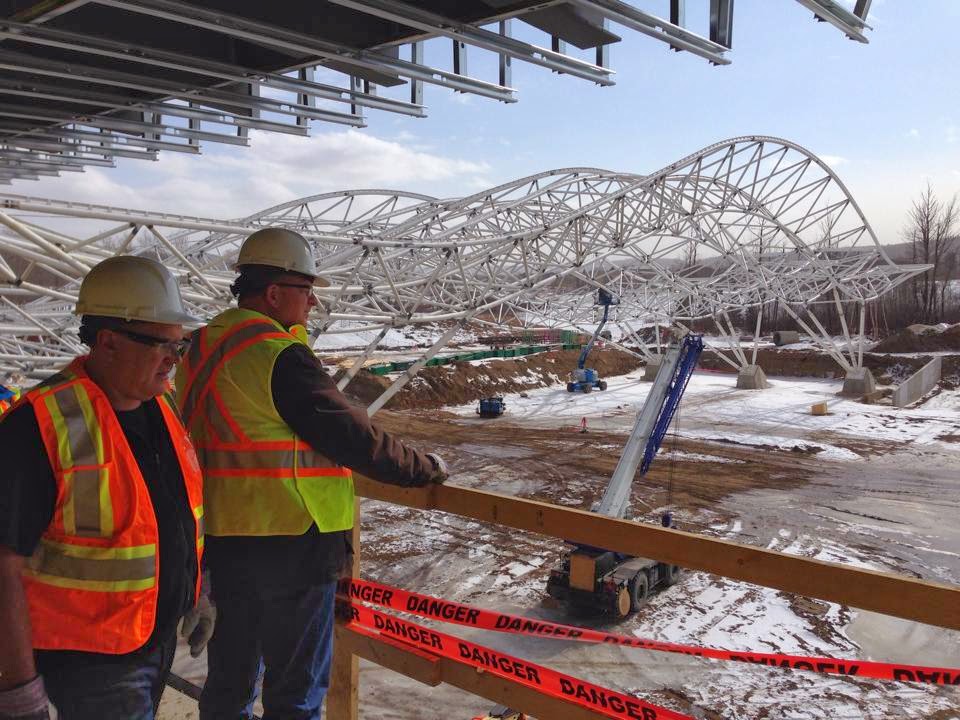 While I was intimately familiar with the plans, and watched from a distance as foundational work began followed by first steel, nothing prepared me for the actual size of Shell Place.  The undulating roof structure that will cover the stage area at the end of the football stadium is gargantuan.

"You could fit two symphony orchestras under here," I commented to Tim.  "Probably more," he said.

It immediately struck me that this could very well be the largest permanent stage canopy in the province.  I don't know if that is the case, but it would be worth finding out.  It might be a great talking point. 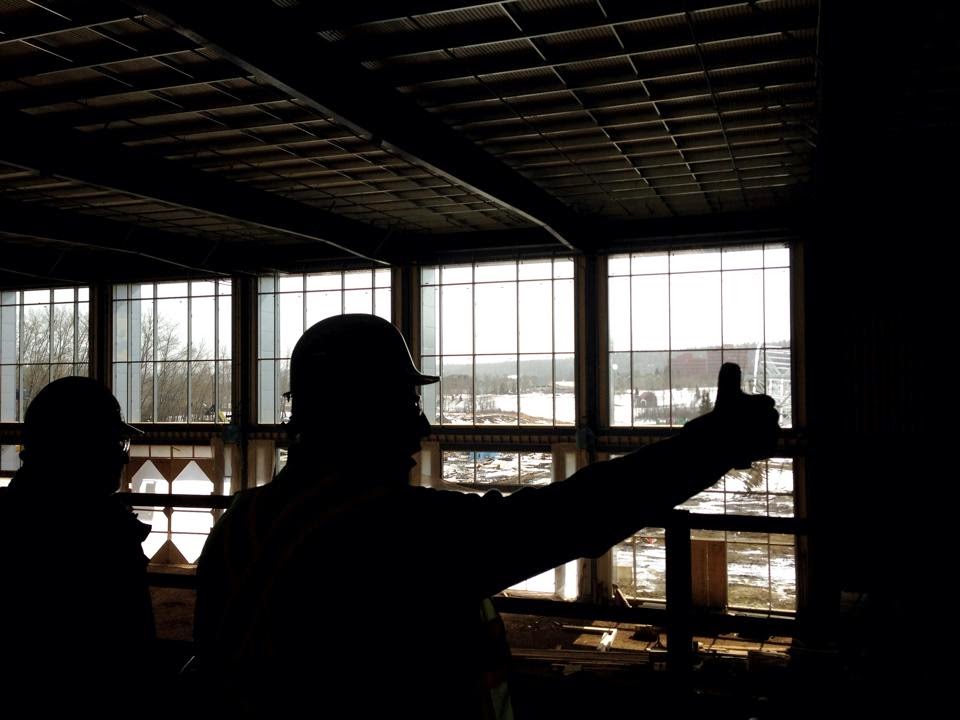 The field house is unique for two reasons: 1) it offers a breathtaking view of the Snye and City Centre and provides unparalleled levels of natural light, and 2) it has huge garage doors that open to the outside, for those special events that can take advantage of the adjacent park area.

Conference facilities will be in abundance in Shell Place, including a brand new (and much anticipated) kitchen, taking an already booming catering business to new heights.  The banquet hall, with all the partition walls open, will accommodate upwards of 900 people, making it likely the largest facility of its kind in Fort McMurray. 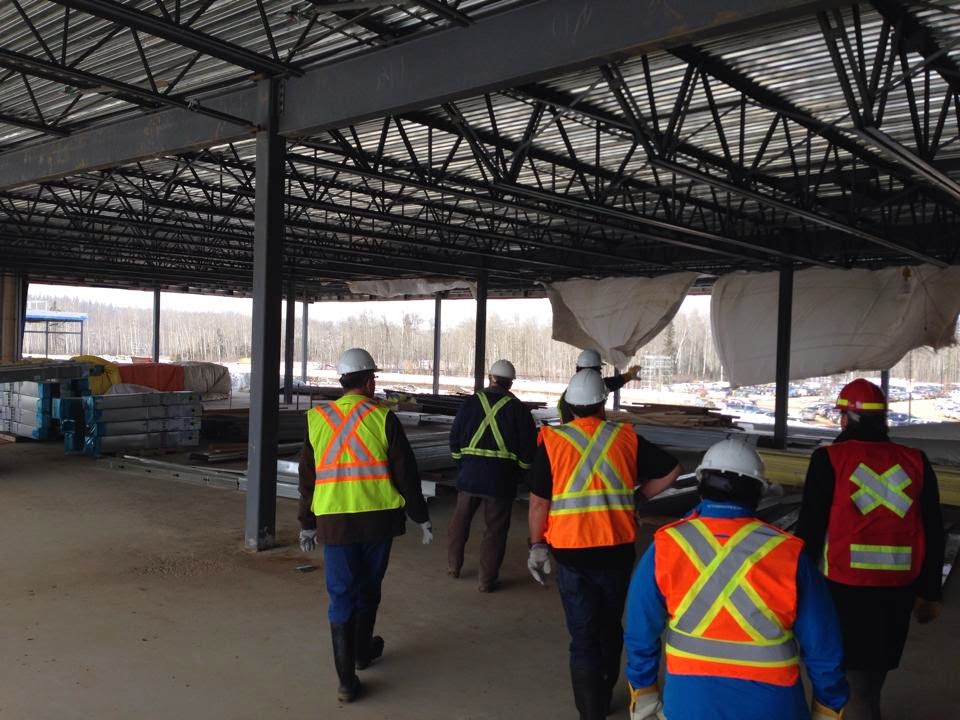 We walked down the outdoor mezzanine the length of the football field to see the yet-to-be-enclosed nonprofit shared space facility and the early stages of the baseball stadium.  Then we went down to ground level for a walk through the baseball and football fields, truly getting a unique perspective on the scale of the development.  I felt like a tiny speck walking down those windswept fields of the future.

It's going to be a spectacular addition to our community and a facility already revered and respected across North America.  We put away our PPE and walked back through a super busy Suncor Community Leisure Centre on a Saturday afternoon.  Thousands of people were participating in a variety of sports, hanging out in the Library, and just taking in the energy of Canada's largest recreational facility.  It's hard to imagine what a Saturday afternoon is going to look like when Shell Place comes on stream.

There is only one thing that would have been the icing on the cake of this world-class facility, a reality that several high level people on this tour pointed out as we gazed across the frozen waters of the Snye. But I, and others, believe that missing link will happen eventually.  I suspect there will be a compelling case made for it on June 15, 2015 when a rather historic football game takes place.

One thing is absolutely guaranteed:  that the 2,500 athletes who visit Fort McMurray for the first time are going to be blown away by what they see and what they experience.  It's rather cliche but absolutely true:  we're going to give them the best games ever!  I'd hate to be the community that follows in our shoes.