"I'm a big fan of bridges," I said last night to open my keynote address at the KAOS 91.1 annual fundraising banquet.  It took a few seconds, but eventually the irony of the comment settled in, and a few laughs started to ripple through the crowd of about 200 guests. 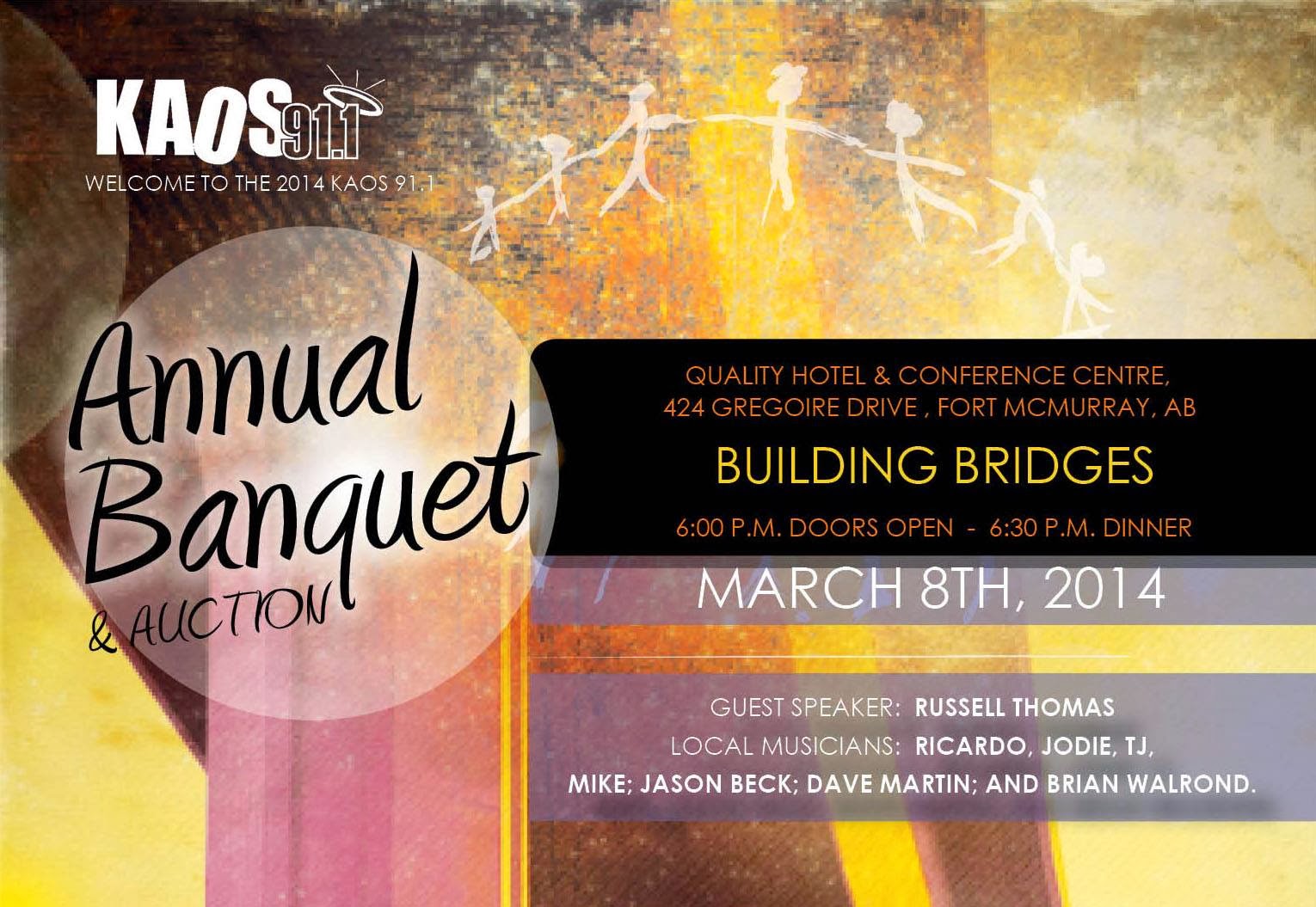 My election loss back in October probably had something to do with my vocal and consistent advocacy for the pedestrian bridge project that was to have linked City Centre with MacDonald Island.  Despite the impact of that policy position on my political career, I'm still a fan of bridges, both literal and metaphorical. 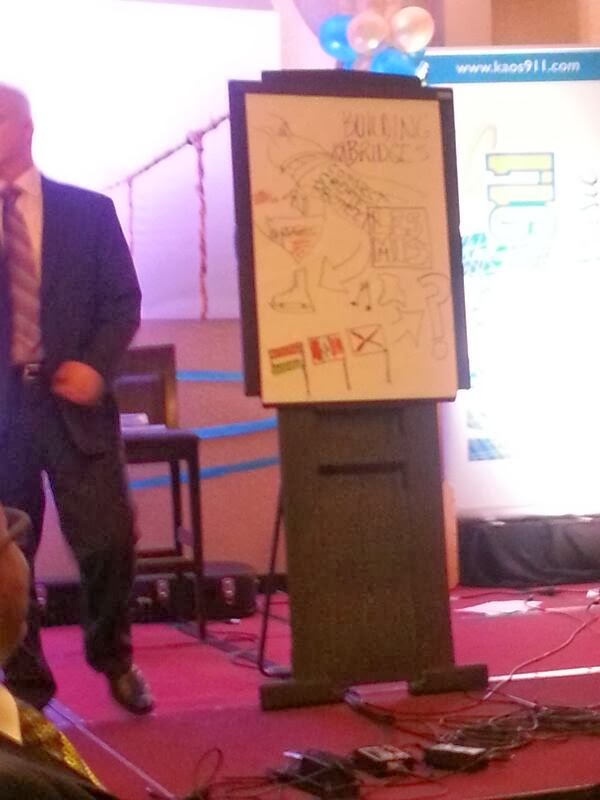 I did something different last night.  Instead of writing a speech, I decided to draw one.  To start things off, I revealed a mind map I had sketched out earlier in the evening on a flip chart, and that became my speaking notes.

I talked about how bridges CONNECT, people and places.  They also CREATE new possibilities.  Without the bridge, people and potential on one side of the water would not have the opportunity to collide and collaborate with people on the other.  Bridges also PROTECT, giving us safe passage when there is turbulent or troubled water below.

Whenever you go to big events, there is a tendency to sit with, and around, people you know.  Taking advantage of the fact that it was a room full of people who largely didn't know each other, I had them take 30 seconds in silence to make eye contact with as many people as possible.  Then I had everyone find a stranger in the room, introduce themselves and share a great kindness that was done to them.

It was fascinating and wonderful to see the room ERUPT. 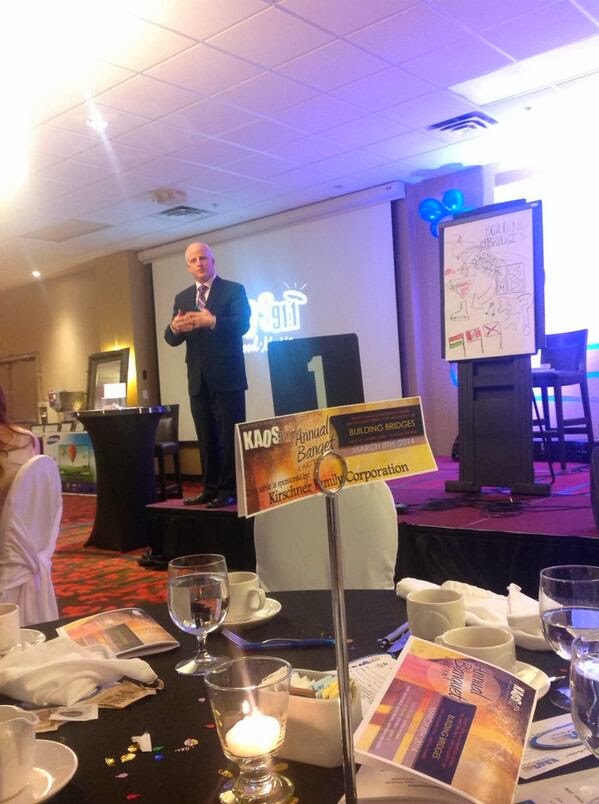 "Did you see what happened there?" I asked after getting them resettled into their seats.  "The energy in the room went from here (low) to here (high) instantly.  Why?  Because of all a sudden about a hundred new bridges were being built.  I would encourage you to reconnect with that person when the program is over, and begin strengthening the bridge you just created."

I love that exercise, and every time I've tried an iteration of it, the room explodes with conversation and activity.  Perhaps people just need permission to traverse the waters that separate them from others?  Perhaps they just need a little encouragement and a setting to do it in?

If the attention in the room is a measure, I think the keynote went pretty well.  It was fun to share the story of the farm labourer who built my dad a handcrafted wooden toy pistol during the Second World War, a man who turned out to be the late uncle of Alberta's former Energy and Health Minister Ron Liepert.  The great kindness that he did for my father resonated across 70 years and provided a bridge to an uncle that tragically died much too young (in a farming accident just a few years after he made that toy gun for my dad).

I told the story of Les Mis, and the way it connected 49 people to each other and this community in a way that was truly remarkable, and how it made my son's 15th birthday absolutely unforgettable.  Through that experience, many people who were relatively new to Fort McMurray, have created new friendships and a stronger sense of connection to this place, and the potential it contains.  Several of them have been seen in recent days singing the national anthem at Oil Barons games.

Speaking of the national anthem, my friend Jason Beck knocked it out of the park last night with his rendition of "O Canada".  This fellow has a most incredible singing voice, and I'm going to make it my personal mission to get him on stage in a Keyano Theatre Company musical.  Thanks to the key and range that Jason chose, and having just come off two months of intense singing with Les Mis, I was able to sing the anthem in a way that I have never sung it before.  I've always struggled with "O Canada", running out of breath, not being able to hit the high notes, and sounding particularly lame.  With Jason's lead, I was able to sing full voice, full intention, and it felt amazing.

KAOS 91.1 has had a tough year.  Signal issues have really hurt. How the music and talk comes out of your radio makes a big difference as to how long and how often you will listen.  Improvements are on the way, which should make 2014 a banner year for this station operated by King's Kids Promotions Outreach Ministries, a registered charity.


I was honoured and grateful to have had the opportunity to talk about building bridges and support KAOS 91.1 last night.  I was humbled by the room of great people, who were so generous in their attention and intention to connect with the theme of the event.

It was a lovely evening among friends, an evening of building bridges, creating new possibilities, and traversing troubled waters.  Congratulations to the KAOS 91.1 team for doing an outstanding job.
Email Post