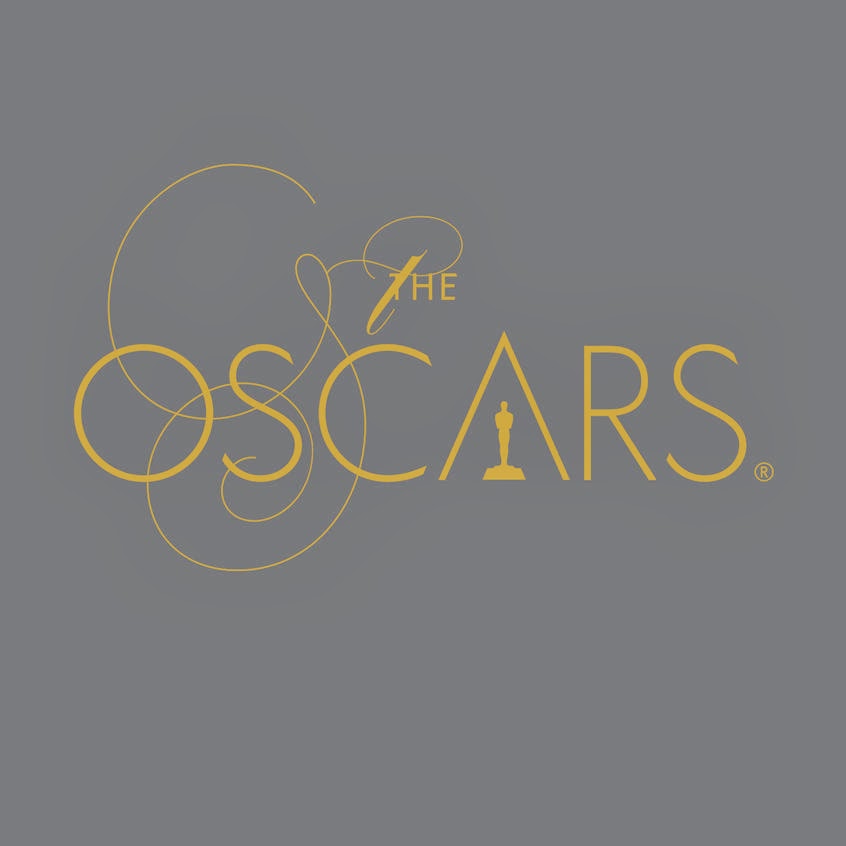 I had no reason to watch the 86th Academy Awards.  Who the Oscars went to meant little to me as I had seen but one of the nominated films - Despicable Me 2.  But watch I did, all three and a half hours of dance numbers, movie montages, presenters, accepters and many other bits and pieces that have become synonymous with the ceremony that is watched around the world.

Some of the speeches were sensational, fresh, inspiring and moving.  Jared Leto, who won BEST ACTOR IN A SUPPORTING ROLE for Dallas Buyers Club and Cate Blanchett, who won BEST ACTRESS IN A SUPPORTING ROLE for Blue Jasmine, both took to the stage like they owned it and delivered articulate and powerful messages.  But it was Matthew McConaughey, who won BEST ACTOR IN A LEADING ROLE for Dallas Buyers Club - still gaunt and sallow from the weight he lost to play the part of a footloose and fancy-free electrician and rodeo cowboy who gets slapped upside the head with an HIV-positive diagnosis and is given 30 days to live - and demonstrated what a powerful, heartfelt, and eloquent Oscar acceptance speech is all about.

Some people like to sit back in their arm chairs and pontificate about the woodenness of the host, the pointlessness of the montages, and the jokes that fell off the stage and hit the floor.  Perhaps they are bemoaning the good old days when geniuses like Bob Hope, Johnny Carson and Billy Crystal set the Oscars on fire with their blazing wit?

I'm more interested in the moment of brilliance when this year's host, Ellen DeGeneres, managed to bring Twitter to its knees.  During one transition - before she had pizza delivered for the gaggle of stars near the front - she invited Meryl Streep, Brad Pitt, Kevin Spacey and several others to join her in a group selfie.  She then challenged the audience - likely in the hundreds of millions - to help her set the retweet record. And set the record she did.  The ultimate celebrity selfie, as of right now, has been retweeted over 2.5 million times.  This is now, by far, the most shared picture in Twitter history. 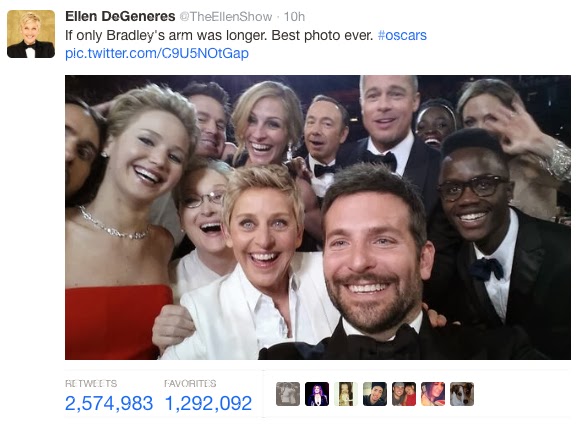 It's a great photo, imbued with personality, spontaneity, and fun.  Truth to fact, I can probably only identify five of the celebrities who appear in the frame: Jennifer Lawrence, Meryl Streep, Ellen, Kevin Spacey (with the goofy face in the back), and Brad Pitt (with the smirk), but I can guarantee that the star power of the other individuals just shot to the moon with one click of the button and one tweet.

Ellen did something that absolutely maximized the opportunity, and created a compelling, and unexpected, piece of live television entertainment that brought the millions of people watching into the experience.  All of us, live tweeting or monitoring Twitter during the broadcast, collectively went scrambling to watch for Ellen's tweet so we could directly connect with the Oscars by retweeting it.  We did so in such numbers that Twitter couldn't keep up.  It crashed.

I enjoyed the evening, especially the selfie, the pizza, and a number of the acceptance speeches.  But the highlight of the evening for me was the IN MEMORIAM segment followed by a beautiful performance of Bette Midler's "Wind Beneath My Wings".  That song, from the movie Beaches, absolutely kills me every time.  Following on the heels of the sustained tribute for Philip Seymour Hoffman that closed out Hollywood's annual remembrance of those who had died in the previous year, it was particularly moving.

I'll admit, after seeing multiple awards for Gravity, Dallas Buyers Club and 12 Years a Slave, I'm intrigued to seek them out and give them a watch.  If the Oscars does one thing exceptionally well, it draws attention to films that deserve to be seen.  Bless them for that.
Email Post
Labels: 2014 Oscars 86th Oscars Ellen DeGeneres Tweet that toppled Twitter