I was furiously jotting down ideas, acronyms and pearls of wisdom from Olympic goal medalist Adam Kreek at yesterday's Project Management Conference at Keyano College.  He walked us through the planning process for two major projects in his athletics career, the first being his row for gold at the 2008 Beijing Summer Olympics, the second, a row across the Atlantic Ocean.  In both cases, there were striking parallels to the process 70 of us just went through to prepare for Les Mis. 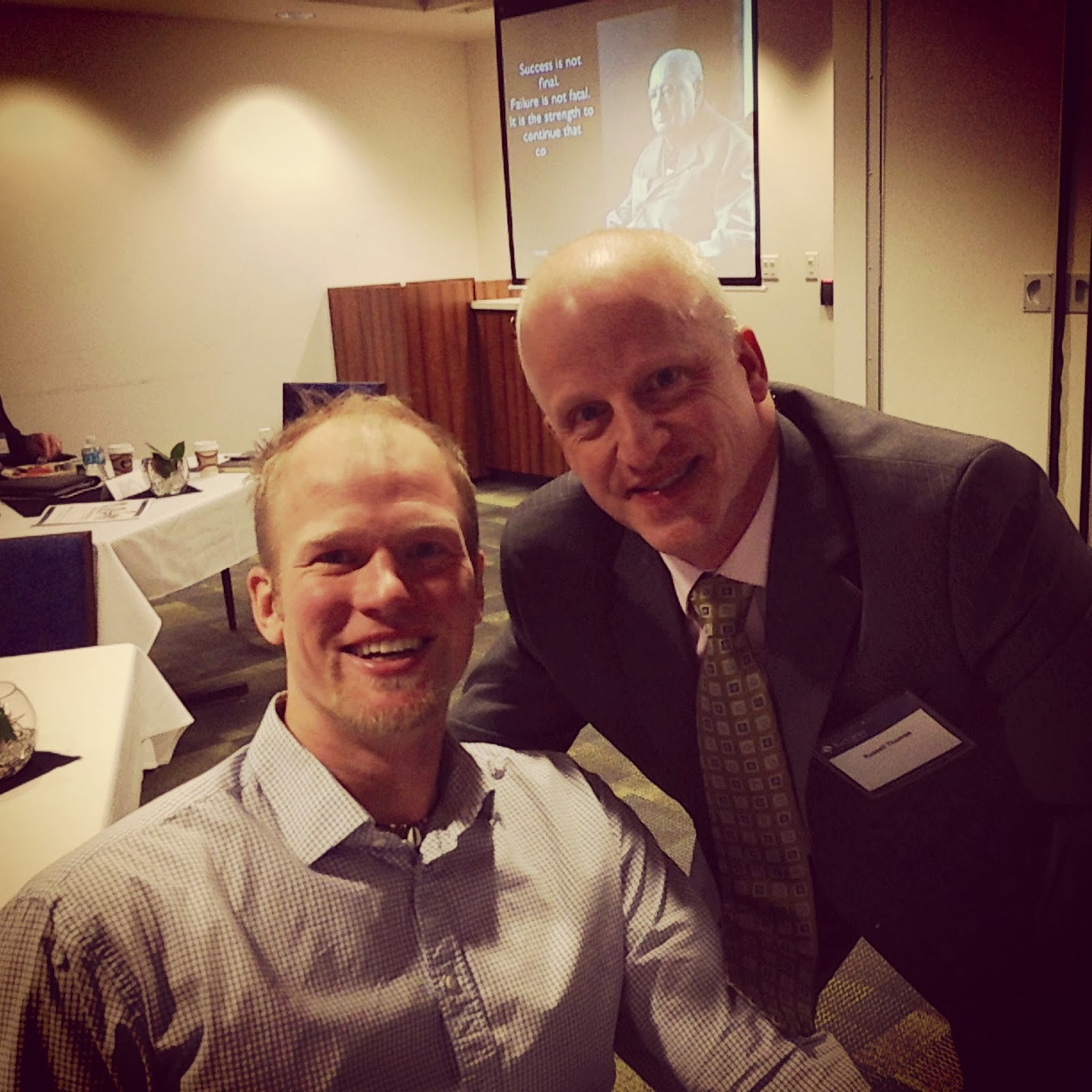 As he described his daily routine, which started well before 6 am, I was blown away by the regimen.  I couldn't write fast enough to capture everything, but it was a determined cycle of eating, rowing, resting, exercising, eating, rowing, resting - you get the picture, right up until the end of day, which usually meant lights out at 9:30 pm.  Apart from working the plan, he had an intimate and detailed understanding of the WHY, and what each activity was doing to prepare his body for success.  Every calorie, every weight lifted and every aching muscle was an integral part of the trajectory to stand on top of that podium.


"It doesn't matter who you do, it matters who you do it with."

Winning Olympic gold or attempting to row across the ocean were both team pursuits.  So, learning to work together, in close quarters and with a shared vision of success was essential.  Each member developed daily rituals, small but consistent tasks done at the same time in the same way, that led to performance rituals. This repetition, this consistency of action and mental focus, drills its way into your mind and body, so when the starting gun goes off, a chain of events follows that in many ways has been pre-determined.  We had that same sensation as the opening music of Les Mis began playing and we got on the performance train. The hours of rehearsal, the character development, the blocking and the timing took over and the show happened.


"Focus on what you can control, ignore everything else."

Of course, things can and do go wrong.  Like the moment that their boat was deluged by a giant wave in the Bermuda Triangle, 73 days into their Atlantic crossing.  Adam was about to lay down for a sleep when all of a sudden the cabin was full of water with the main hatch closed.  In that moment of chaos, the training took over.  Lungs bursting, Adam floated to the top to snatch the last bit of air left, before submerging to find a way out.

"Are you OK? You OK? You OK?" he asked, emerging safely on the outside, as the entire crew did what they had to do to engage the life raft, send a message out, and even find one of the crew member a pair of pants, as he was in the middle of going to the washroom when they capsized.

It felt similar the night that Sheldon Dahl (Javert) missed his entrance.  Tim Heggie, playing Valjean, kept going, imagining the lines that were to have been sung, and the show motored on, eventually getting right back on track.  At the intermission, everyone checked in with each other to understand what had happened and to learn from it.


'Debate the idea, not the person"

When you're working in a team environment, conflict is going to happen.  It is human nature.  Kreek offered a great tool to manage issues that are causing friction.

If it CHAFES make it SAFE.


"We see things not as they are, but as WE are"

He also talked about the role of excellent communication and gave a great example of how email can be received, and often misinterpreted.  He read the text of an email in two different ways, but using the exact same words.  The first time, he added negative tone, and signed the email with I. M. Outtogetya.  The second time, he added supportive intonation and positive energy, and signed the email with I. M. Hereforyou.  It was the same message, received in two completely different ways.

I most appreciated his replacement of SMART goals with CLEAR goals.

C - goals need to be Collaborative
L - know your Limits
E - find the Emotional connection
A - make them Appreciable (I had to ask about this one.  It means breaking down the big goal into smaller and incremental goals.)
R - make them Refinable

Again, relating back to our Les Mis experience, we knew that it was going to take all of us rowing in this same direction to pull off the show.  We knew how much people, resources, space and time that we had.  Claude helped make the emotional connection right at the very beginning with his speech about the story and themes of forgiveness, second chances and GRACE.  The entire process was appreciable, as we added layer after layer in a thoughtful and purposeful way.  And we definitely made the goal refinable, making adjustments and improvements as the process went along.

Interestingly, Adam talked about the phenomenon that happens about 5 to 10 days out from the end, when the proverbial poop hits the fan.

"That is when people inevitably start to lose it," he shared.

I think back to how we were feeling as were at the beginning of production week, about 5 to 10 days away from opening the show.  People were still fully committed, but they were incredibly tired and frustrated, saying things like "I'll never do this again" or "I can't take much more of this".  By the time we put the show in front of an audience all those feelings dissipated and by the end of the run, most everyone was talking about what show to do next. 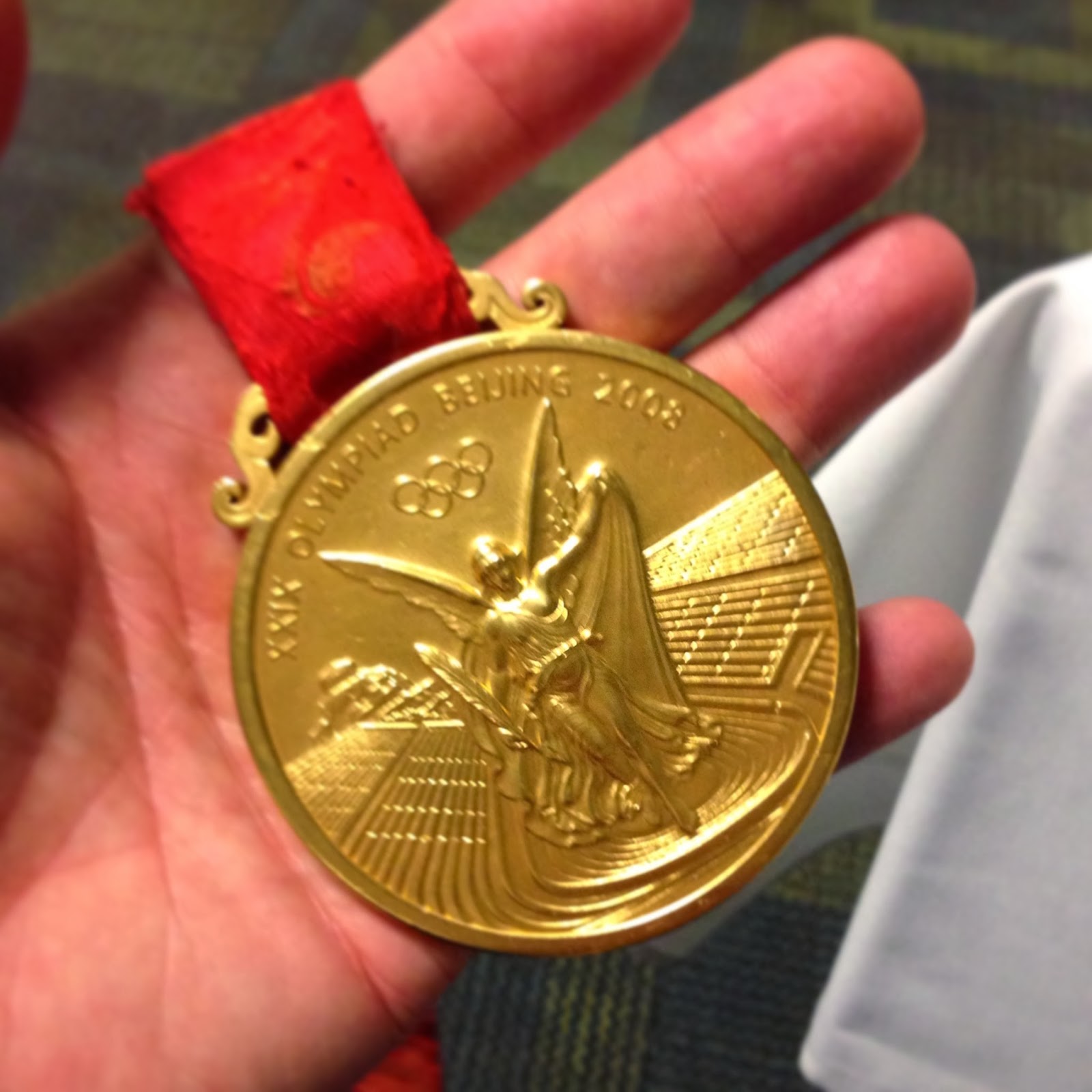 It was a thrill to be able to hold Adam's Olympic gold medal.  A powerful symbol of excellence, perseverance, attitude and focus, it might have been the most interesting and inspiring physical object I have ever held in my hand.  I think it's cool that he chooses to share it as he travels around the world doing speaking engagements.  It could just as easily be sitting on a shelf gathering dust.

If you ever get the chance to hear Adam Kreek speak, jump at it.  He has great wisdom to pass along, and he does it in a way that is riveting and inspiring.  He has that champion quality that makes him a joy to be around.
Email Post
Labels: 2008 Summer Olympics Adam Kreek CLEAR Goals Project Management