Shatner explores the notion of CULTURE

"Mary had a little lamb," began William Shatner, delivering a short talk on the nature of culture at Keyano Theatre and Arts Centre as part of its annual fundraiser, The Affair for the Arts.

"Are words culture?" he asked.

He gave a couple of examples from nature, including whales who communicate with each other through great distance, and elephants who connect through low frequency seismic vibrations.

He brilliantly honed in on the role of the Arts Centre in creating cultural opportunities, whether that be through community theatre, concert presentations, film, or talks like the one we enjoyed last night.  Culture connects, and the arts give us a way of understanding, appreciating and celebrating the way we all fit together.

"So, Mary had a little lamb," he continued.  "Whose fleece was white as snow."

"All of a sudden we have a simile or a metaphor, which forms a mental connection, an image in our minds.  And, that is culture."

Mr. Shatner spent 20-25 minutes giving his thoughts on culture, particularly crafted and prepared for our Fort McMurray/Keyano College audience, before opening up the floor to questions.  He was well received, with a boisterous standing ovation at both the start and conclusion of the presentation.

The energy in the audience was striking.  I'm not sure if it was the influence of the wine, served up by the Fort McMurray Opimian Society, or the collective recognition and appreciation for the arts, but it felt incredibly encouraging.  Every time Les Mis got mentioned - and it did several times by several different people - there were loud hoots and hollers from the audience.  When Alan Roberts, Director of Keyano Theatre and Arts Centre, was introduced by emcee Paul Taylor, Chair of the Keyano College Foundation Board, there was exuberant applause.  Apart from that offered up for Mr. Shatner, it was the loudest of the night.

I'm very optimistic about the arts in Wood Buffalo, and last night's #KeyanoAffair reinforced my belief that great things are on the horizon. 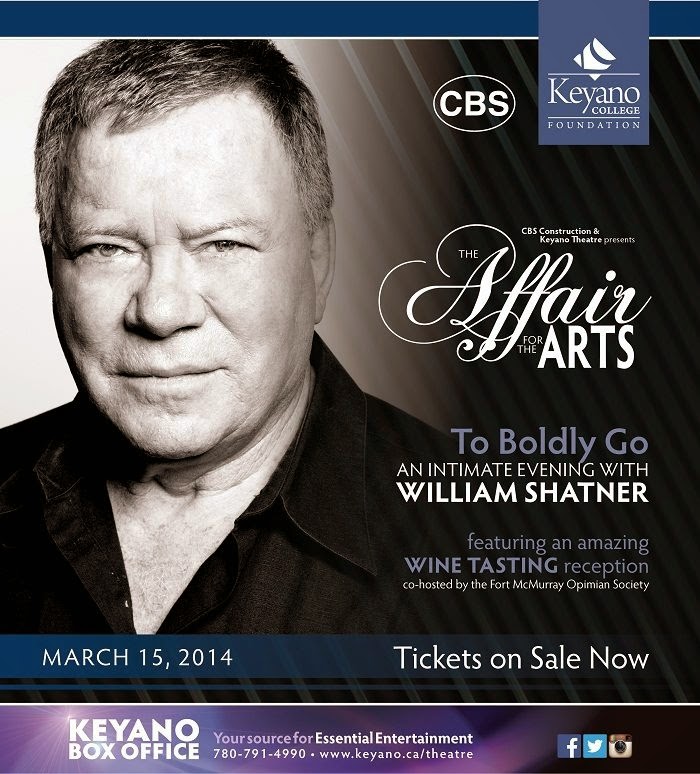 Big thanks to CBS Construction for being the headline sponsor of The Affair for the Arts.  And congratulations to ATB Financial for being celebrated as the Keyano College Partner of the Year.  They were out in full force last night including Bryan Rabik, Jeanette Bancarz and Nelson Barbosa, who do such a great job locally, and Dave Mowat (President and CEO), Rob Bennett (Executive VP, Retail) and Brian Hesje (Board Chair) from head office.

Mr. Shatner went out of his way to celebrate the investment of the sponsors and spent time with each after the presentation, giving them some out-of-this-world face time behind the scenes.

Probably the highlight of the night for me was the final draw for 2 VIP meet 'n' greet tickets.  Sherry Duncan, who is a huge Bill Shatner fan, was on her feet pushing out positive energy from her position in the audience, just a few rows in front of me.

Mr. Shatner returned to the stage, dipped his hand into the box full of entries and pulled out one name.

"Sherry Duncan," he said, "we hope you'll join us backstage."

A scream of delight, shock and disbelief erupted, as Sherry bounded down the stairs.  It was an awesome moment that illustrates that dreams really do come true.  And that is part of culture, too.
Email Post