Art in the Alley 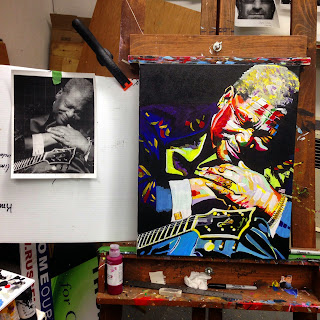 In between painting BB King, Bruce Springsteen and a third subject that is still a secret, I spent time cleaning up the area around the mural of Elsie Yanik and Dorothy McDonald. It was so nice to be in the alley with rake in hand listening to the birds and seeing the beautiful patterns on the grassy right-of-way as the sun tracked across the sky. 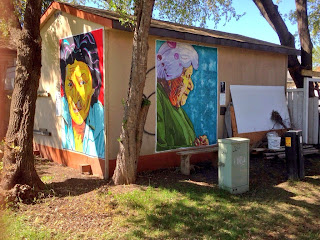 During the last municipal election, I was able to give away most of my election lumber:  two by fours used to erect highways signs that had been stacked high against the studio.  Only a small pile remained, which Dylan, Ben and Heather's dad make quick work of on Monday afternoon, nicely stacking them in a lean-to next to our little recycling shed in the back yard. 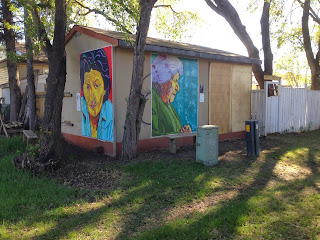 I fastened two of the four by eight sheets of 3/8ths plywood to the right of Elsie's mural creating a new mural space.  All I have to do is give it a cost of primer and it's be ready.  I will create a large 8-foot by 8-foot square portrait of another Fort McMurray figure over the next couple of weeks.

It feels like an oasis back there, especially after raking up the leaves and debris, trimming the weeks, and cutting back the branches.  On a warm summer afternoon, it is perfectly shaded, serene, reflective and inspiring. 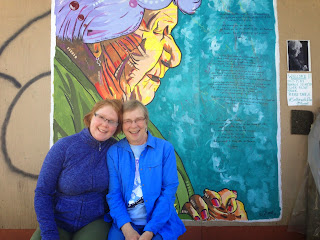 I have this vision of inviting people over for an "Art in the Alley" thing, where we have light refreshments, live acoustic music and art hanging on the fences.  There are a number of murals already: five if you include Norm Sutton (next door) and the two I did of Bill Clinton and Woody Allen 15 years ago.  Maybe I can uncover the new one during our little gathering in the alley.  That would be fun.  I'd also invite Allen Butler, my neighbour on the other side of the fence, to participate.  He is an amazing artist.

As human beings, we naturally create spaces for ourselves.  I treasure the space in and around Birdsong Studio.  Within its span of its embrace are the people I love and an indelible sense of "home".

The murals are always here for people to enjoy.  Two benches have been crafted out of pieces of lumber that Ben and I found last year along the Athabasca River.  We invite you to visit and sit for awhile.  You'll be glad you did. 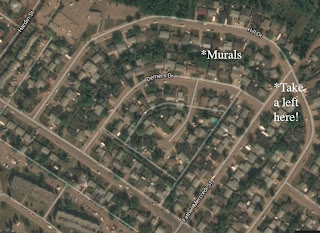 To find the murals of Elsie Yanik and Dorothy McDonald, drive north on Father Mercredi Street then take a left at the alley entrance between Hill and Demers Drive.