When you point your finger... 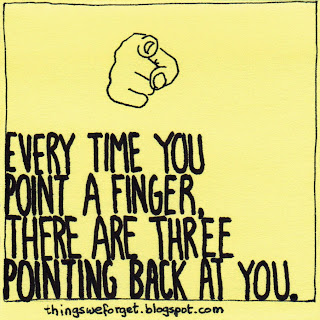 I walked into Dylan's room to wake him up.  It is rare that he sleeps in these days, but I had heard him rustling about quite late last night.  Of course, leaping to conclusions, I thought he was up playing video games much later than he should on a school night.  But, as often happens when we jump to judgement, we get it wrong.  His stomach was upset and he was doing the back and forth to the bathroom dance into the wee hours of the morning.

Not knowing that context, I glanced about his room: clothes strewn everywhere, boxes and game paraphernalia everywhere, and an absolute absence of anything resembling order.  My anxiety got straight up, as it seemed only one week ago - on another not-so-well-day - that I insisted he bring his hovel up to the standard of "home".  And though he said he had, I made the fateful error of not checking.

As I steamed at my computer, I looked around my own space.  There are clothes on the floor, papers (as opposed to gaming gear) strewn everywhere, and way too many things hanging about causing clutter.  Who the hell am I to judge?

Just last night I observed the top of my nightstand, about to topple over with unfinished books and magazines.  The fact is that I have a hard time reading for more that five or ten minutes when we go to bed at night.  My eyes get so heavy that I peter out and fall asleep.  Meanwhile, the articles, novels and assorted other reading adventures get half-read.

How can I expect Dylan or Ben to clean up their world if I haven't cleaned up mine?  The other thought is that it always ends up like this....eventually.  It may take months after a deep clean and organize, but eventually, ever so surely, the clutter returns.

My goal for the weekend is to stop focusing on that one finger pointing, and focus on the three pointing back at me.  I'm going to dedicate a few hours to doing a deep clean and sort of my space, and assess what I can do differently going forward to reduce the likelihood that I will end up back in this state again.
Email Post