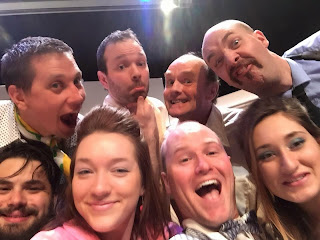 We have arrived at Media Call night for The Odd Couple, in this case, also a "soft" preview.  I call it "soft" because it's not something we're pushing vigorously, just a word-of-mouth thing where guests join us to provide the final element to this show: an audience.  It's a pay-what-you-can performance, meaning that you show with some money in hand - a $5, $10 or $20 bill - and enjoy the show. If you're reading this blog, then you are one of a select few people that know this is happening.

Last night, we had an audience of two.  The mere presence of two souls made such a different for this ensemble.  We now need 20 to 30 people to give the actors a sense of where the laughs are going to land and how to adjust.

I'm so pleased with the design of the show.  Sharon Heading has done a brilliant job of creating a mid-1960s world within which this hilarious story happens.  The costumes are bang on and the set dressing perfect.  For a low budget production, with the expert assistance of professionals like Trevor McDonald, Eugene Carnegie, Renee Richards, Scott Weber, and Melissa Mitchell, The Odd Couple looks fantastic on the Recital Theatre stage.

The entire ensemble and the crew were firing on all cylinders last night.  We finished up the cue-to-cue for Act 3 and dived right into a run of the show.  I just sat back and mostly watched.  You'd think after watching it for the upteenth time that the show would get a little tired.  It never does.  There's always so much to watch and enjoy as this ensemble continues to grow into their respective characters and the circumstances of the play.

I hope my many friends (print, radio, bloggers) join us tonight for the Media Call.  We're going to share a scene from the show, let you take pictures, and chat with some members of the cast.  Not that I can be objective in any way, but this is an arts story worth covering.  There are some many interesting angles:


I am so proud of this show.  It's time for an audience.  The Odd Couple curtains at 8 pm tonight in the Recital Theatre.
Email Post