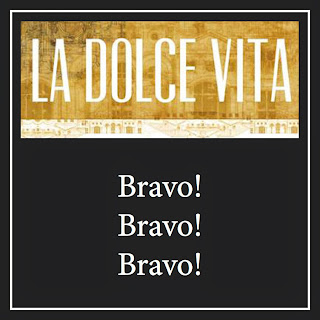 We were sitting next to two significant sports guys at last night's experience at La Dolce Vita: A Taste of Italy.  Andrew Boutilier was to our left, an influential leader with a long track record in the hockey world and the director of sport for the 2015 Western Canada Summer Games.  To our right was Colin Solbak, an accountant by day, he is a fierce and passionate champion of minor sports, particularly baseball.  It was perfect, yet unlikely, company for an evening of fine Italian cuisine and opera.  They, along with the rest of us, were transfixed by the performances. 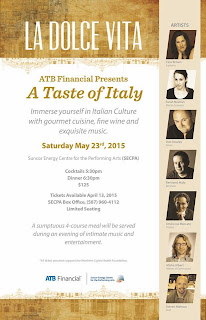 The cultural immersion was presented by ATB Financial, who not only covered the hard costs of the event but participated in its planning and execution.  All the funds from ticket sales were presented to the Northern Lights Health Foundation in the form of one of those big cheques made out for $24,000.

Heather and I were guests of Bryan Rabik from ATB Financial, a generous and gracious host who has grown into a staunch advocate for the arts.  Bryan and his team have embraced the idea of presenting classical opera and have delivered their second successful function.  Those of us in the Suncor Energy Centre for the Performing Arts and a long list of people on the waiting list are on the edge of our seats to find out what's next.

The stars of the experience were Cara Brown - Soprano, Sarah Neiman - Mezzo-Soprano, Dan Rowley - Tenor, Bertrand Malo - Baritone, and Emilio De Mercato - Pianist.  Introduced and perfectly punctuated by the scintillating Misha Albert who played the role of Master of Ceremonies, the performers did three different sets between courses prepared by Chef Steven Niehaus and his team.

I wish I had a list of the songs they did, but I don't.  What I can say is that it was a magical mix of songs that included heart-breakingly beautiful arias and delightfully exuberant brindisis (not sure on the spelling of the plural form of "brindisi" - which is a toast in Italian).

"What was your favourite one?" I asked Andrew and his wife Tracey at the end of the evening.

"The duet (with Cara and Dan)," Tracey answered without hesitation.  "It was incredibly beautiful."  I think she may have even confessed that it inspired a few tears. Heather and I agreed; we were particularly moved as it was one of our wedding songs.

I loved the second to last song that featured all four singers doing different melody lines all at the same time.  The effect was intoxicating; the hairs stood up on the back of my neck.  I kept thinking how wonderful and unforgettable it would be for the four singers and the pianist to do a flash mob of that piece at the Fort McMurray International Airport just as several plane loads of guest workers were arriving.  Can you imagine their reaction finding themselves surrounded by this spontaneous eruption of opera.....in Fort McMurray?  It would be sensational and getting close-ups of the faces of oil sands workers who have arrived from across the country and the U.S. would be absolute gold.

Bravo! Bravo! Bravo! to these wonderful artists for a performance that was off-the-charts amazing and to ATB Financial for being ardent champions of the arts in our community and province.
Email Post