A lot of things went through my mind as I enjoyed the opening acts at the Peace Warriors Health and Arts Festival last night.  Part of my brain was focused on Dylan, and the presentation he would soon give.  The other part was busy processing the importance of the event to the cultural health of our community.  In many ways, I felt like I had time-travelled to 1996, when I first began volunteering with the interPLAY Festival.  Peace Warriors had that kind of grassroots vibe, an element of potential permeated the air.

Pattie Dwyer and Kaitlin Armstrong are the masterminds and drivers behind Peace Warriors.  While they both glowed with joy last night, I'm sure they both had an undercurrent of thoughts and pressures inherent with running a large, multi-stakeholder event.  They are yoga and fitness practitioners by day; event planning and execution is probably not their first choice in term of investing their time.  But God bless them both for running with it and making Peace Warriors happen.  Last night was magic.

The evening program opened with a number of different dance routines by Generation Dance Studio (GDS).  It was great to see our fellow Hometown...The Musical! cast members again, a few years older now, but continuing to do beautiful work.  GDS is a cultural jewel in Fort McMurray. In addition to training hundreds (and likely thousands) of dancers over the years, they always gives back to the community by participating in events like Peace Warriors.  They were stunning.

Three chairs were placed on the stage next, one under each of the choral mics hanging down from the ceiling.  They were filled by three lovely ladies and their guitars who, each in their turn, sang a couple of songs.  Joellee Fuller, Tori Hines and Hannah Forward were fantastic.  What a lovely introduction to their unique voices and songwriting approaches.  I want to hear more.

I was a little shocked to find out that Hannah, who did a beautiful rendition of Leonard Cohen's "Hallelujah", was only 13 years old.  What a talent.

Gara Nlandu is an actress, model, dancer and director who has moved to the community from Montreal.  She gave us a scintillating taste of her skills in an entrancing and funny presentation, integrating dance, acting, humour and exquisite writing.

"We need to get you on the stage at Keyano," I said to her at the end of the evening.  A remarkable talent is in our midst and it was so inspiring to watch her take over that stage.

While all of this was bringing joy to one half of my brain, the other was still focused on Dylan, and what he was feeling, thinking, and doing backstage to get ready for his presentation.

Then it was his time, his moment, for his story.

He came out, sat in the chair downstage centre, and began by immediately engaging the audience.


I'm going to do my best to remember what Dylan said and surround those words with quotation marks.  However, this is only my best recollection of how he shaped his story.  Hopefully, I will do some justice to the strength and clarity of his message.  The truth is that nothing will come near to have actually been there to hear and see it in person. 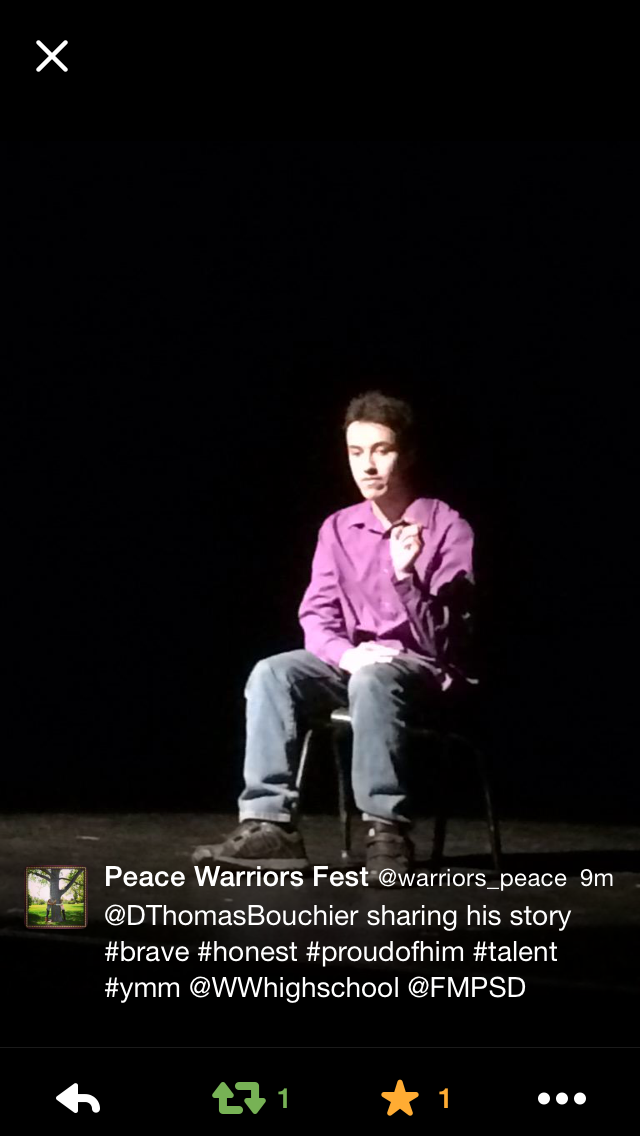 "Let me ask you a question," he began.  "Have any of you stayed inside at recess because you were bullied, didn't fit in, or just felt different?  Put up your hand."

A smattering of arms popped up throughout the theatre at Westwood and he began his story.

"At a young age I was told I had something called cerebral palsy," he said.  "I couldn't run as fast as the other kids, I couldn't keep up, and often fell down.  I've always had to wear braces on my legs.  They helped me walk, but they still made me different from everyone else."

He chose to stay inside the classroom at recess, alone, because he felt so different.

He took us all through two significant leg surgeries and what it was like spending three months in the hospital recovering.

"It was hell," he said.  "At one point I just wanted to end it all.  But then I thought that ending my life, my pain, would just create more pain for my family, so I muscled through it."

Dylan shared the life-saving impact that Keyano Theatre had on him, and how finding his theatre family made him feel accepted and a part of something bigger than himself.  It was clear that every single person involved in Hometown...The Musical! and Les Mis was in his heart last night.

My stomach twisted as he spoke frankly and honestly about what it felt when Ben and I were offered parts on A Christmas Carol, but he was not.

"I was ecstatic for my dad and my brother," he said.  "But I felt devastated."

He then he saw an audition notice for Westwood's production of A Midsummer Night's Dream.

"I auditioned and was offered a part," he said.  "That's when I met my Westwood theatre family who accepted me immediately. I've also discovered something that I am good at."

Dylan brought everything back at the end of his story.

"Remember that question I asked?"

"If you put up your hand and you looked around, you probably noticed that you were not alone.  That's the most important thing to remember: you are never alone." 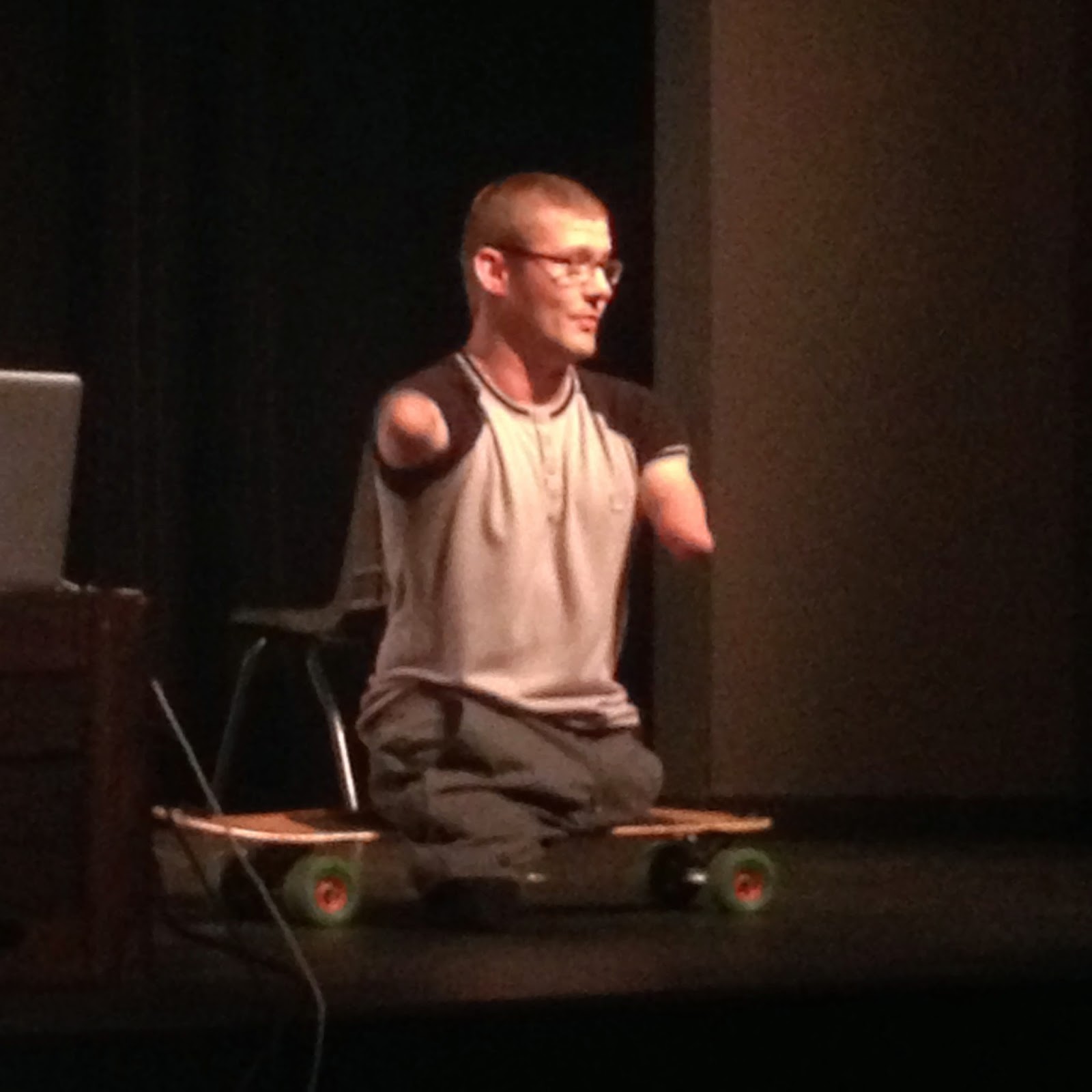 Chris Koch closed out the night with his keynote presentation.  Born with no arms or legs, Chris has travelled the world telling his story.

"As part of what I do I always give the audience a chance to ask questions," he began.  "Often people who come to see me share their story."

"And I'm not just saying this, but that was one of the most inspiring stories I have ever heard."

"Dylan: you said that you had discovered something that you are good at.  Let me tell you, you are not just good, you are amazing." 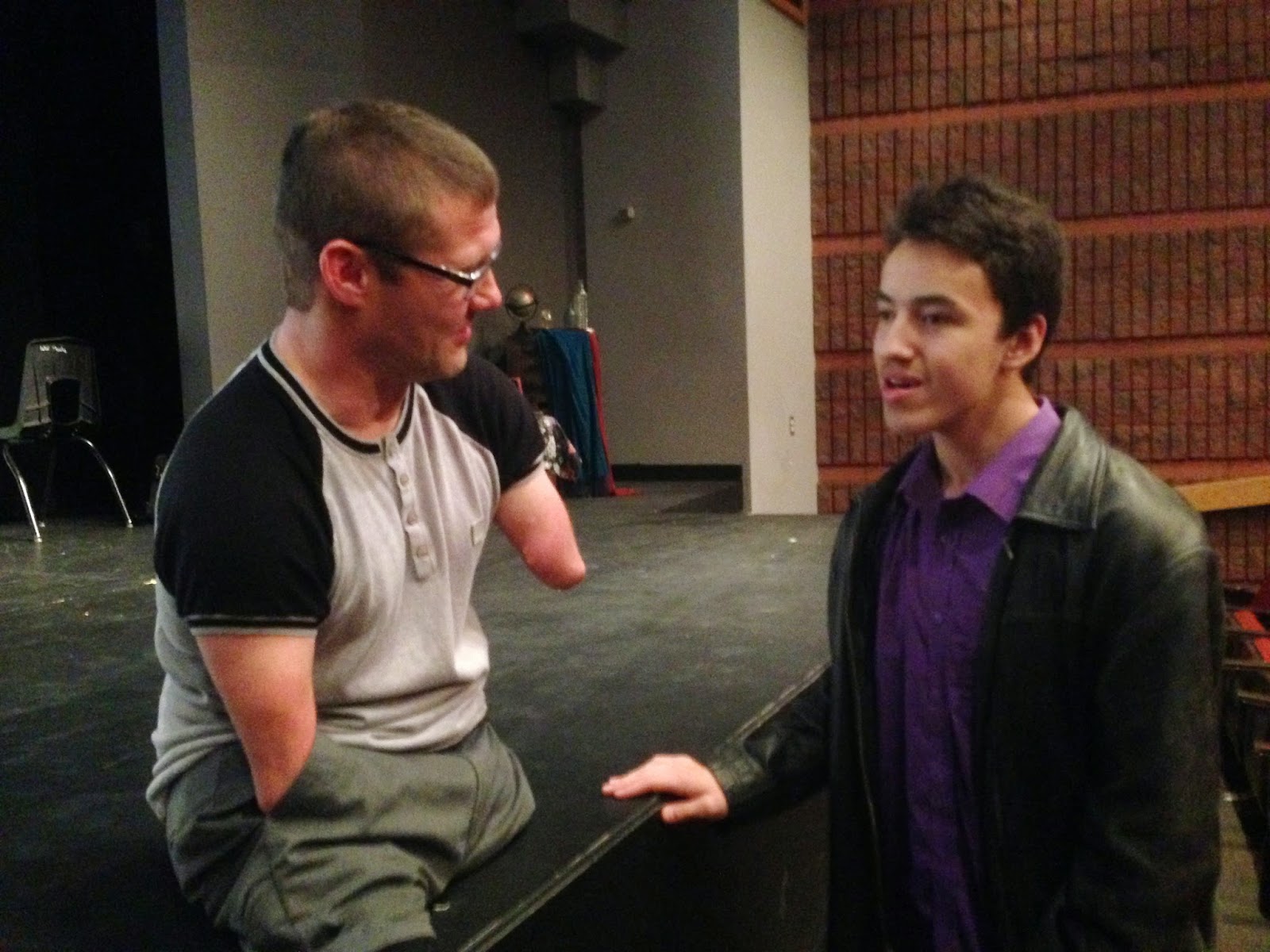 Chris may never know the impact that his authentic words of encouragement had on my son last night. I got the sense that the time they were able to spend together after most everyone had left the theatre was a watershed moment for Dylan. 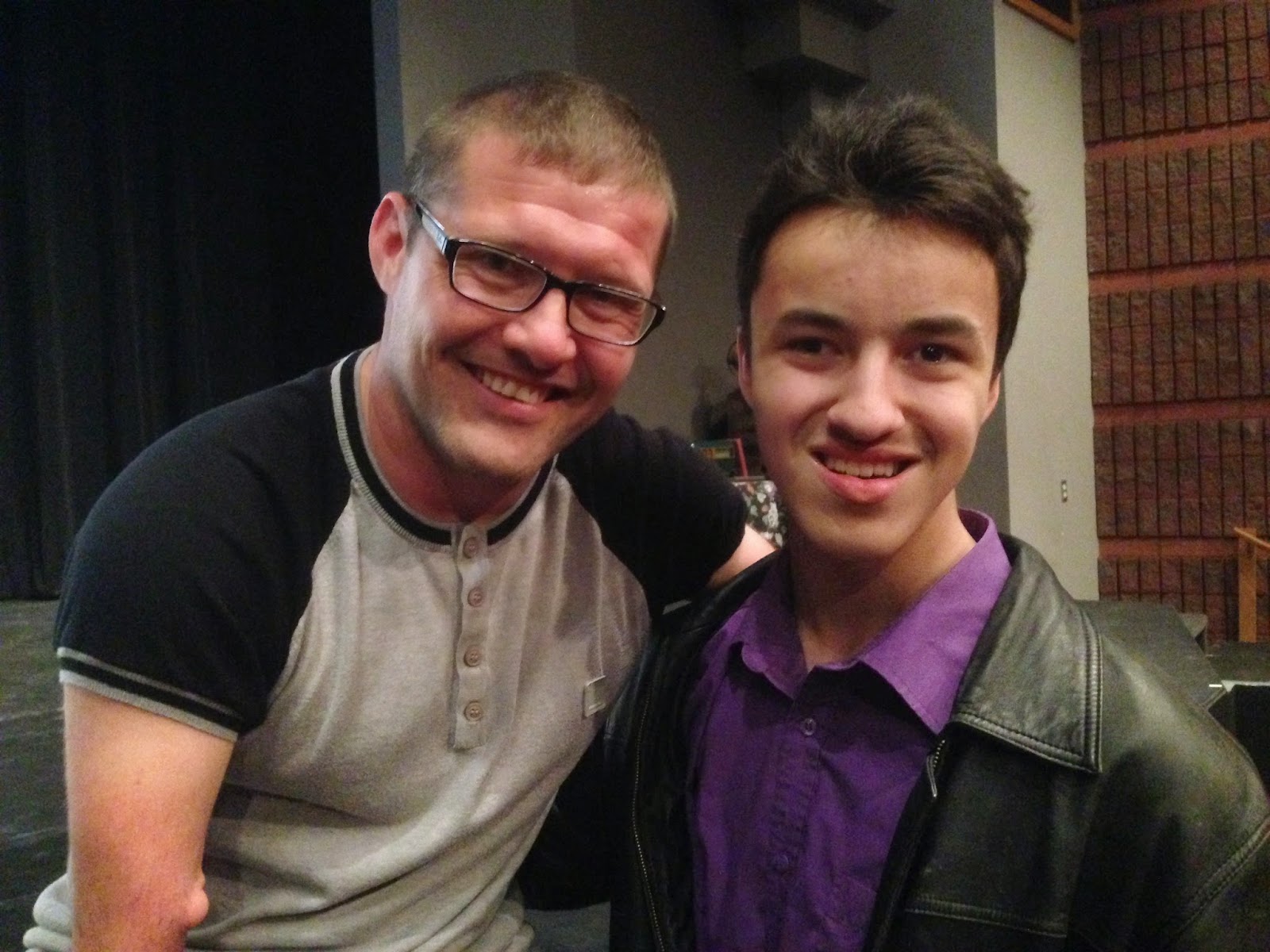 Chris inspired everyone of us at Peace Warriors, but he made a profound difference in the life of one particular young man that was sitting beside me.