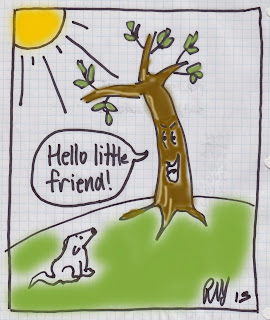 It's so dry out there...the trees are bribing the dogs. (JOKE)

It's so dry out there...that they have issued a province wide fire ban. (NO JOKE)

I've been saying it for weeks that conditions are ripe for forest fires.  In fact, in this morning's Fort McMurray Today story written by Garrett Barry, I read that conditions are worse now than they were in 1995 when the Mariana Lake fire forced Highway 63 to close.

"It took a little over five minutes for the fire to engulf two miles and reach Highway 63," said Robyn Haugen, regional spokesperson for the provincial wildfire team preparing for the inevitable.  Long story short: things can go from fine to fiery in a big hurry.

The soil that sustains our front lawn is so hard that it is actually a little uncomfortable to walk on it.  The neighbours lawn, usually deep green and growing like weeds, is patchy with brown spots.  We haven't had much rain, just a few scattered showers, or about 11 mm of precipitation.

We have dodged a bullet so far, generally speaking.  There have been other years when forest fires have been so bad that we've been blanketed with smoke for weeks at a time.  The year of the Slave Lake fire was particularly bad.  It was hot, bone dry, and difficult to breathe.  You could taste the need for a complete fire ban on your tongue.  Things feel different today; the weather feels spectacular.  In other words, it's easier to forget of how bad it is out there and how one human error could change the situation immediately.

I'll never forget fishing down by the Athabasca in 2011 during that smoky period in 2011 as our friends in Slave Lake were combing through the ashes of their devastated community.  Visibility was poor as I sat down by the water's edge waiting for the fish to bite.  Off to my right were spent firework canisters, likely fired off the night before during a beach party.  Those people had no idea that they were flirting with disaster.  If one of those fireworks misfired, or went sailing off into the adjacent bush, lower Thickwood would have been in trouble.

So be cautious out there.  Talk to your kids, so they fully understand what is going on as well.  Let's face it; we're all in this tinder box together. Looking at the forecast for the next week, there is no precipitation in sight.
Email Post