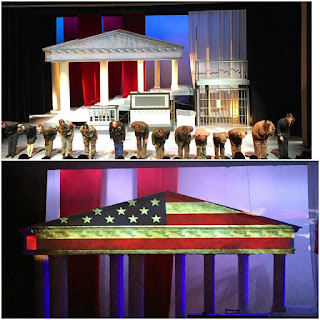 "You're the costume designer," I said to the fellow taking the seat next to me at the opening night of A Few Good Men at Keyano Theatre last night.

"Indeed I am," he replied with a big smile.

We enjoyed a lovely chat with David Barrus, who came to Fort McMurray this summer to do costumes for the DramaForce production of The Little Mermaid after a last minute request for assistance.  He must have jumped into this production almost immediately after.

"I wonder why we haven't started yet," he asked as the clock ticked ten minutes past the advertised start time.

Alan Roberts, Director of Keyano Theatre and Arts Centre, popped out moments later to let us know that a technical issue had popped up and that there would be a slight delay.  The audience just rolled with it and enjoyed a Friday evening of conversation with whoever happened to be sitting around them.  The show started a full thirty minutes late; but owing to its quality, it didn't seem to matter.

Let me just admit that I have a difficult time watching shows on Friday nights.  After a long week of work, my level of exhaustion usually reaches its peak during the exact hours we were sitting in our seats.  My legs typically get restless and I get to bed earlier than later.  Last night, I was so drawn in by the show that if my body was tired, I completely didn't notice.

I loved the work of the leads.  Brodie Dransutavicius was outstanding in the role of Daniel Kaffee.  He kept the story moving forward and did a wonderful job with the words penned by Aaron Sorkin.  Diana Moser as Joanne Galloway was strong and believable.  I thought they were both excellent.  But, it was Chris Bowers, who I keep going back to in my mind.  He played Sam Weinburg, the third attorney in the defence team out to prove the innocence of Harold Dawson (Seth Lavigne) and Louden Downey (Adam Zacharias).  His delivery and unassuming presence provided some wonderful comedy in some moments, and high drama in others.  All three were brilliant casting choices on the part of director Dave Horak.

Equally brilliant was the decision to have Mark Armstrong play prosecuting attorney Jack Ross.  Mark has a lightness in his approach that was ideally suited to this character and he pulled it off.

Another highlight and joy of this show was seeing Michael Parr on stage.  We have known about his talent for years - he's a helluva singer and a natural performer - but this was my first time seeing him in a major role.  As Matthew Markinson he excelled and added essential depth to the ensemble.  I hope we see more of him in the months and years ahead.

There were a couple of other newcomers in the show that I really appreciated. Lavigne, in only his second appearance on the Keyano stage, was extraordinary in his role as one of the accused.  Matt France as Jonathan James Kendrick was menacing and marvellous.  My fellow Leadership Wood Buffalo alum, Christophe Durieu, was a great choice for the doctor Walter Stone.

"Zach is so good," whispered Heather under her breath each time we came down centre as the judge.  She was right, Zachary Barrett continues to grow as an actor and is always so interesting to watch.

It was nice to see Adam Zacharias back on stage.  He is a talented character actor who delivers a solid performance every single time.  As Louden Downey he was a perfect mix of dim and discipline.

I appreciated the ensemble players who filled out the scenes: Michelle Daley, Alex Hill and Hanna Fridhed being the ones who have not yet been mentioned.

Last mention must go to Dave Boutilier who played the larger than life Nathan Jessep.

"You can't handle the truth," exploded out of his mouth and an audible "Oh yah!" was heard in the audience, as if they had been anticipating it all night.

Tackling a role made famous by an actor like Jack Nicholson is no small mission.  However, Boutilier made it his own and delivered another exceptionally strong performance.

There were times I had a hard time hearing the dialogue, especially in the opening scenes of the play.  That would be my primary piece of constructive criticism.  It got better as the show moved forward.  I also found some of the sound cues to be a little strange - crying babies, street noises and abrasive transition sounds - but they may have been related to the technical issues experienced at the top of the show.  Alan asked us to forgive any sound issues that popped up as they had to bring in a back-up computer before starting the show.  It is likely that some things got discombobulated in the process.  So, all is forgiven.

I appreciated the adaptive directing by Dave Horak - making great use of the players in the ensemble and crafting effective and efficient transitions.  Erin Gruber's use of projections and light to create a sense of place and mood were excellent.  The costumes - which arrived in just in the nick of time according to designer David Barrus - were so essential to the story and did the job of bringing us deep into the heart of the American military.

Overall, A Few Good Men packs a punch and is a highly entertaining and entrancing two hours of theatre.
Email Post