It was Dylan and Ben who suggested that I paint Justin Trudeau, the Prime Minister Elect of Canada.  The thought of doing so hadn't crossed my mind. 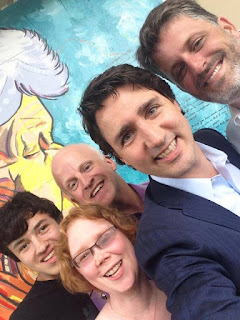 I decided to use as a reference photo a shot from when he was here at the house to get his #SelfieWithElsie back in 2014.  He had a nice bright smile and it was an unforgettable moment in our backyard being visited by the leader of a national party. 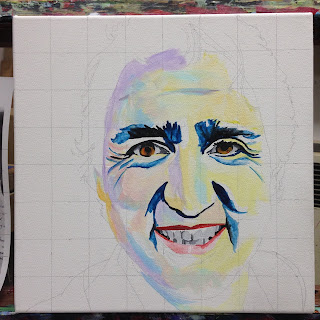 I followed my usual path when doing this 12" x 12" portrait, going from light colour values to darker.  But it was only when I started adding the hair that the character really emerged from the canvas. 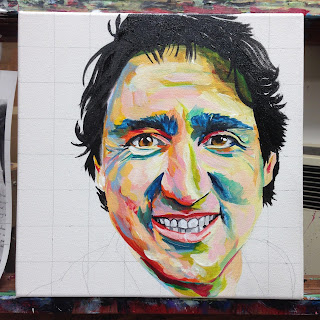 Every subject has a feature that is their key.  For some people it is the shape of the mouth, for others it is a particular wrinkle line or a glint in the eye.  For Justin Trudeau, it turned out to be his famous locks.  I discovered a very similar key when I painted Brian Jean, the leaders of the Official Opposition in Alberta. 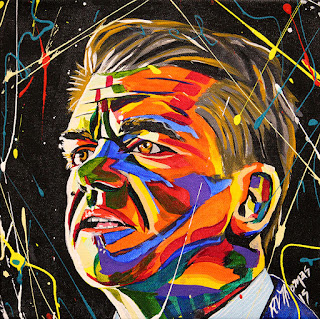 I could say with certainty, that the key to a portrait of me would not be my hair - I don't have enough for it to factor into anything.  I'm guessing it would be my nose and my squint lines. 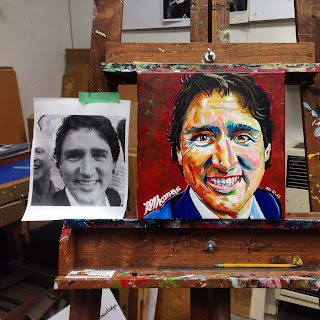 All I have to do is paint the sides of the canvas and this portrait of Justin Trudeau will be ready to pass along to its new owner.