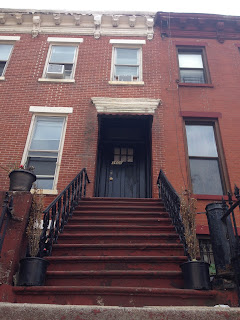 When I look back on this New York trip, I imagine that what will stand out is the time we spent in our little neighbourhood on Madison Street and Throop, or as it is called, Bedford-Stuyvesant.  Much as the fellow at Mindcamp described, each block is its own little world.  People say hello; they seem to know one another and at no moment did I feel unsafe or unwelcome in any way.  It was a predominantly African American area - what I've always imagined Harlem to be like. Walk a block or two, and it's a completely different community, with people just as friendly, small family run grocery stores on almost every corner.

Our base of operations was a dated brownstone.  It was minimalist, in the sense that it was rather basic, with remnants of the past cobbled together to make a run down unit rent-able. 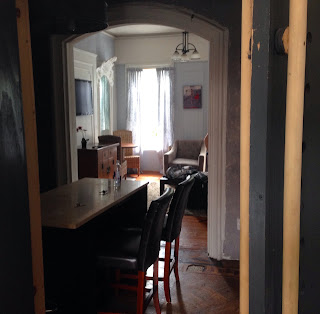 A set of sealed double doors bled light from the foyer into the bedroom along with noise when our tourist neighbours from Germany came in late at night, always an hour or two after we drifted off.  They must have been taking in shows every night, as it was usually around midnight when they rolled in. 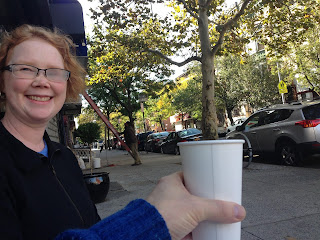 We got into the pattern of getting up and walking the neighbourhood before stopping for a morning coffee.  It was a nice way to start the day: strolling, observing and talking. 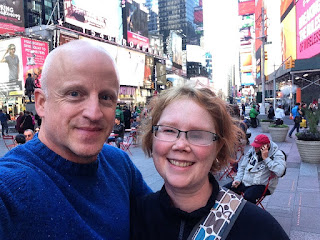 On the final morning we watched as a beat cop stood on the corner, greeting people, joking around, and in her homespun kind of way, keeping the peace.

Across the street, just down from where the cop was standing, was a well-dressed guy, sweeping up the detritus from the weekend: bits of garbage, leaves and dust.  He had gloves on, juxtaposed with his smart attire, which led me to think that he went through this cleaning routine each morning. 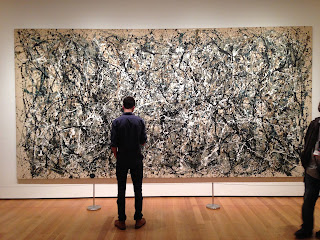 It struck me as interesting that in a city of tens of millions, we saw familiar faces at MoMA.  A group of three: a black girl with a nose ring, a girl with bright striped shorts and a fellow rode the subway with us that morning.  We had went our separate ways - Heather and Dylan doing their thing, Ben and I exploring Central Park and the three strangers doing who knows what - then ran into each other on the painting floor of the world famous art museum.  I could tell they recognized us, too. 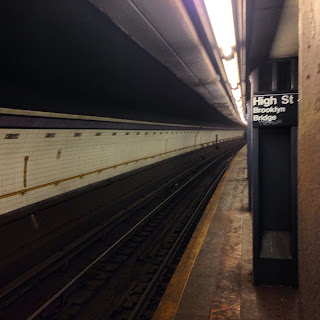 The interesting characters seemed to emerge on the subways trains in the evenings.  One fellow bowed in prayer then start preaching for a few minutes, way too loudly and manically.  This went on for a number of stops before he got up and got out.

The guy who appeared to be homeless, double dressed (he was obviously wearing two pairs of jeans for warmth) and doubled over, kept popping up and dropping down.  But when his stop arrived, he got up, without even lifting his eyes, and carried on. 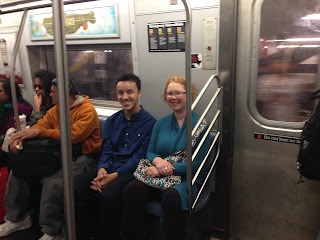 Another fellow was selling chocolate bars in a very non-threatening way.  One ask and he faded back into the crowd.  A similar thing happened when a young fellow made an announcement asking for donations, holding out an empty paper cup.

Girls applied make-up, others primped their hair. The subway is a feast of humanity, people on the move, in transition, others floating or just being.

We took a bus one day, from Church Street to Central Park.  It was painfully long and slow with too many people and frequent stops in rush hour traffic.  One lady, seated near the door, swears by the bus and avoids the subway at all costs.

"It's good for retired people like me who have nothing but time," she said, extolling the cleanliness and fresh air of the buses and saying the opposite about the underground option.

Some subway stops are dirtier than others with multiple layers of grime and fossilized gum marks. Some are nicer, less abused, newer.  I didn't mind either and would likely be a regular user if I lived in this place.  Buses would be the exception as they are way too unpredictable in terms of arrival time. 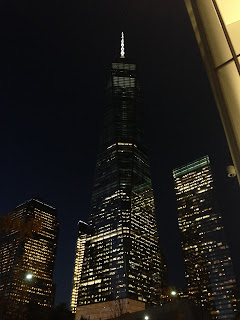 I'm so glad that Heather suggested a swing to the World Trade Center area.  Being at the base of the Freedom Tower was breathtaking.  It went up and up forever, until it reach a tiny paint in the sky.  The memorial was both surprising and powerful.  The fountain emptying into a void is a perfect metaphor for the hole in the heart left by the events of 9-11. 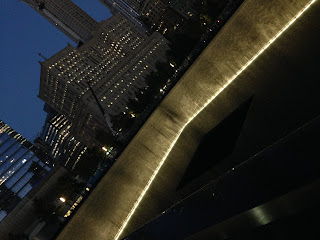 The names of the fallen are carved into the solid steel counter that defines the space - the same size as the original footprint of the two towers.  Remnants of the original building remain in the interpretive center, a cutting reminder that this was very real just a few short years ago. 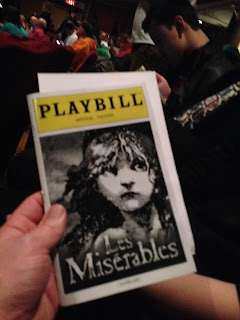 We saw two shows on this four-day mini vacation that felt like a week and a half: Les Mis was Ben's choice. It was extraordinary from start to finish.  The only characters that were less strong were Eponine and Marius.  I missed Misty and Kyle, and kept thinking how they would have strengthened a great production.  A Canadian was playing Valjean, a runner up from Season 3 of Canadian Idol named Aaron Walpole.  He was impressive. 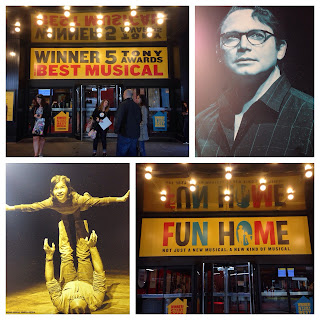 Dylan's pick was Fun Home, a Tony Award winner, and according to the two ladies we met while waiting to be seated at the restaurant the night before in Brooklyn, a show to be seen.  They had not yet had the opportunity and were visibly covetous of our tickets. 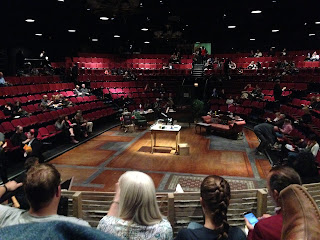 It felt important - at first elusive and strange, but quickly compelling and challenging - especially taking place in the Circle in the Square, on of the bastions of American Theater.

As everyone stood to applaud at the end, it was as if we all recognized the history we had just witnessed. There was an epic quality to this small intimate production.

Our patience was tested several times, especially when the need to find a bathroom became critical.  Dylanhad to go in the worst way when we were in an unfamiliar area of the Financial district.  Thank goodness we found a Subway and relief.

Another time Ben had to go, and we had to go searching once again, cutting our first trip to Central Park short.  Finding a public restroom is not so easy.  We were more mindful of our bladders for the remainder of the trip.

I was more successful in getting the waterworks moving this trip.  I even managed to use a handicap toilet in Central Park - an accomplishment if you've read about my lifelong condition of not being able to use public washrooms. 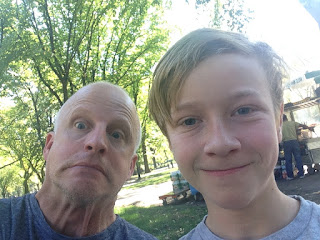 We managed to post on Facebook, Twitter and Instagram on a frequent basis - keeping people back home in touch with our movements and new memories.  Posts about our 13th anniversary got the most action.  Heather excelled at posting interesting collages of our various stops.  She is becoming a more powerful social media force with each passing day. 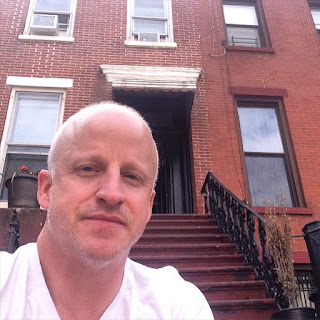 I can see us living in Brooklyn, though it would be difficult to afford.  Nice brownstones start at $1 million and go up from there.  I love the idea of the brownstones, especially the notion of having a studio on one floor.  It would be amazing. There would be no need for a vehicle if we reached the point in our life when we were ready to downsize and slow down.

As I'm writing this - longhand for a change (transcribing it now from my little black book) - we are in the air heading to Toronto.  It's been a great trip.  Time has slowed down as all the cares and concerns of home have been paused. 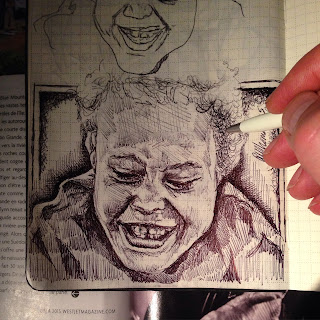 I drew on the final leg of the trip to Fort McMurray.  It was the perfect activity close out a lovely time away and begin the transition back to normal life.