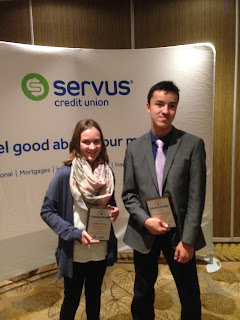 Dylan and a young lady named Gabby Dubuc from Ecole McTavish were honoured last night at the Fort McMurray Chamber of Commerce Business and Community Awards.  It was a special night, as everyone got dressed up to honour excellence and encourage the heart.

"What is it that you do?" I yelled across the table to Gabby, who immediately lit up and shared that she was a soccer player - and a pretty good one by the sounds of it.  When her name was announced, she strode to the stage with speed and confidence.

Stella Kreutzer, on behalf of Nexen ULC, presented the award.  Unfortunately, she was a last minute stand-in and didn't have a copy of the bio for Gabby, who was recognized in the younger youth category.  I would like to know more about this exceptional young lady and why she was recognized.  I know Stella felt the same.

When Dylan was called up he went to the stage and almost took a tumble.  He quickly regained his exposure and with a big bright smile said "I completely didn't see that step."  The large group in the room loved it and laughed along with Dylan. 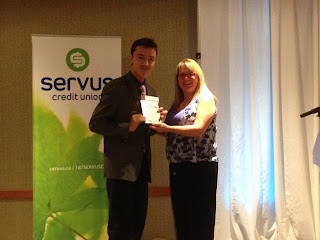 Here is a piece of why Dylan was nominated:

Dylan Thomas-Bouchier has been an inspiration and friend to many since we was a small boy. Now in Grade 11 at Westwood Community High School, he is avid member of Cheepiyak Theatre and Keyano Theatre Company. In the past few years, he has performed in Les Miserables, A Midsummer Night's Dream and the award winning production of A Rope Against the Sun. He contributes to the Fort McMurray Gamers Association and the Fort McMurray Filmmakers Association and soon will be featured in a film called The Good Survivor.

As a person who has grown up with cerebral palsy, Dylan has overcome many barriers and successfully found his place in the world. It hasn't been easy, as he shared in a presentation at the Peace Warriors Festival in May. Having had to endure a number of corrective surgeries, he talked about his challenges with depression, thoughts of suicide, how he struggled to fit in and how getting involved in theatre saved his life.

Following a return visit to Alberta's provincial theatre camp, Artstrek, Dylan volunteered his time with the production team for the DramaForce production of The Little Mermaid and spent part of the summer working at the United Way. When he is not rehearsing or performing, Dylan is actively engaged in social media and is part of the Fort McMurray Oil Barons game night team.

"I guess I do quite a bit," said Dylan when I read this to him at dinner one night.

"Indeed you do," I replied.

"I am so glad that the Chamber recognizes young people in this way," said Paul Taylor, Chair of the Keyano Foundation and a good friend, as we were leaving for the night.

Many strangers - to my son - came up last night and offered their congratulations. Business leaders made their way through the crowd of people to extend their hand and say a kind word.  I thought that was very classy.

To Krista Balsom and the Balsom Communications team:  thank you for nominating Dylan.

To the Fort McMurray Chamber of Commerce:  thank you for including young people in your awards and for putting on a lovely evening.
Email Post