Reflections from a recovered politician 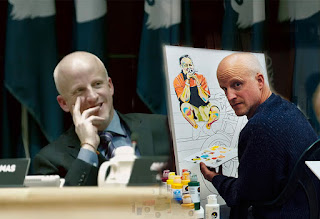 I'll be honest, I don't follow municipal politics as closely as I once did.  I'm too busy working and painting to watch or attend council meetings, thereby leaving me completely dependent on the Twitter stream and news stories that get published for information.  It's been a tough slog for this group of well-meaning elected officials.  They have had to withstand the twists and turns of an enormous amount of change, in the community and in the economy.

A legislative device, that didn't get used in the previous term at all, is being utilized almost constantly these days: the notice of motion.  A couple of doozies got tabled last night, including one to invest municipal dollars in the Willow Square project and another to bring the Sports and Entertainment Project to a grinding halt.  Both have their merits, both are worthy of debate.

One thing is clear: when the price of oil drops, you have to adjust everything.  All of a sudden, watching dollars shifts to watching pennies.  Retrenchment (great word) is in the air, like a cutting north wind in the fall.  People are more stressed, tempers are short, and difficult decisions have to be made.

Mayor Blake and her team of councillors have not had it easy.  They have had to make tough choices, face criticism, manage internal divisiveness (at times), and cope with levels of stress (I imagine) that will make them seriously consider whether or not they will run the next time around.

One of the councillors passed me in the hall at Shell Place yesterday.  All that came out of that individual's mouth was a number and a wave.  The wave was appreciated; the number was the days left in this term of Council.

I'm grateful for the three years that I spent on regional council.  I went into it with a desire to learn and serve.  I look back on that period and appreciate all of it.  However, losing the election in 2013 was the best thing in the world for me.  I seriously doubt that I would have embarked on this painting adventure if I had won.  Everything happens for a reason; one thing - good, bad or otherwise - leads to the next thing and the next and the next.....

I'm grateful for those who have served and those who continue to do so.  Whether you agree or disagree with their approach or their decisions, they are giving of their time and talent with the best interests of the community in mind.