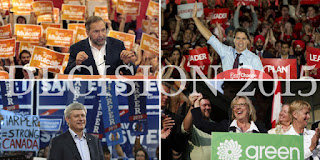 We are in the final days of what has seemed like a never-ending federal election campaign.  It had been going on for so long, compared to previous campaigns, that the scattered election signs and campaign materials seemed to fade into the background.  However, as E-Day nears, conversations are getting more intense, as is the rhetoric.

While this campaign has felt rather never-ending to some of us, it is a relatively short period of time compared to what our southern neighbours endure.

"How long do your campaigns go on?" asked one of the ladies we were visiting with while waiting to be seated at a popular neighbourhood restaurant in Brooklyn last weekend.

"Oh my goodness," said Heather.  "We're in the middle of the longest federal campaign ever."

There was an awkward moment of silence as she absorbed the information. Then she started shaking her head.

"How do we get this so wrong? Our campaign is in full swing for a vote that isn't until a year from now.  It costs billions and billions of dollars."

I'm sure the Conservative government had strategic reasons for elongating this contest.  I'm equally sure that everything that has happened since August 2nd is part of some carefully orchestrated plan to return to power, including some of the choices that have been made at the local level. Putting all strategy aside, I like the shorter campaigns much better.

It took me awhile to figure out which way I was going to vote, as I was see-sawing back and forth between two individuals.  My decision has been made, though I'm going to respectfully choose to remain publicly nonpartisan.

We head to the polls next week and this seemingly "long" campaign will come to an end and we can return to building a better country with whatever party manages to form government.  Sadly, our American friends have 12 more months of madness before they can do the same.
Email Post