No stomach for it anymore

I remember years ago when I made a presentation to council about interPLAY.  From what I remember, it was an update about our growth and the value we were adding to the cultural fabric of our community.  Several councillors seemed completely uninterested and had their noses buried in whatever paperwork they had in front of them at the time.  They only perked up when they had something negative to say.

I went home and I let them have it.  I sent each of them an individual email and chastised them for treating a community volunteer in such a disrespectful and dismissive way.  I received a reply back from each of them with a sincere apology and gratitude for the work that our volunteer board of directors was doing at the time to revive a local performing arts festival.  This was in the days before social media and direct contact was the only way to make a difference.  Had social media been around then, it would have been Facebook and Twitter posts and a blog article to lay it all out in detail. 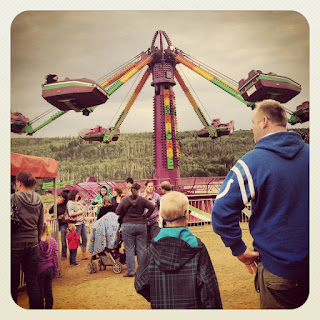 I've been watching from a distance the unfortunate situation between regional council and the organizers of Sustainival, the world's first green carnival.  As a registered non-profit, Sustainival has received an annual grant from the RMWB to help subsidize their environmental education and awareness initiatives attached to the carnival.  Just before we left on our trip down south to Canmore, they found out that they had been defunded.

What has ensued on social media has been unfortunate.  Councillor Murphy, who made the original motion, apparently based on an administrative recommendation, has been the subject of multiple, and very aggressive, enquiries as to the reasoning behind the decision.  People on both sides of the issue are casting stones at each other and turning an unfortunate and difficult situation into an even worse one.

Sustainival organizers are rightly concerned.  Just four months ahead of their annual event in Fort McMurray, they found out that $125,000 in support was about to vanish.  It is understandable that they tried to do everything in their power to persuade council members to change their minds.  Meanwhile, Councillor Murphy, representing one of 11 votes on Council, is sticking to her guns and backing the defunding move suggested by the bureaucrats trying to make tough budget decisions.  Pundits and local social trumpeters are having a field day, piling on the organizers of Sustainival, in some cases, and Councillor Murphy, in others.

Looking at the back and forth jibs and jabs for just five minutes yesterday made my gut hurt.  I had to shut my computer down and go do something else.  I don't have the stomach for it anymore.  People wonder why I don't reconsider re-entering the political sphere.

I have an enormous amount of respect and admiration for my friends at Sustainival.  They created something innovative, educational and positive for our community and its brand.  They also poured their hearts and souls into the annual event, in a similar way that I did with interPLAY for almost 15 years.  I get why they are upset.

On the other side, the regional council gets a massive budget document - when I was there it was over 500 pages - and have to make sense of it all, in a relatively short period of time, and make some tough decisions.  Recommendations come from senior administration, like the defunding of Sustainival, and you have to vote based on the best information that you have in front of you and what is in the best interest of the region.

I believe that most people in this situation have the best intentions in the world - except for the trolls who just like to stir things up, including the one guy who blocked me from seeing any of his posts years ago.  I know it is him because the people I can see reference his name and his comments.

In my older age, I have no tolerance for the mean-spirited, personal attacks that have become commonplace in civil discourse.  I am way more interested in gaining a full understanding of the complex situation that has developed and trying to design a solution.  The trouble is the way information is communicated.  In a matter seconds, a single post or text with a slightly warped version of the truth can morph into an inflammatory buzz bomb of misinformation.  Without warning, both sides have been forced to take defensive postures and fight for their respective truths.

What is my personal position on this one issue?  I don't know.  I would need a lot more information before being comfortable stepping out publicly in support or non-support of the defunding of Sustainival.  There are too many questions in my head left unanswered to form an educated opinion.  My understanding is that it would be a moot point now.  The budget, including its winners and losers, has been passed.  It's time now to shift to solutions and innovations if Sustainival is to survive.