I listened to the John Barry soundtrack to Dances With Wolves as I started putting down the first layers of paint on the large portrait of Tantoo Cardinal.  The sweeping orchestration took me back to a different time, when the First Peoples were one with the land, animals and the sky.  They faced feasts and famines together, weathered storms, and coexisted with the animals. Sadly, when the Europeans arrived everything changed. 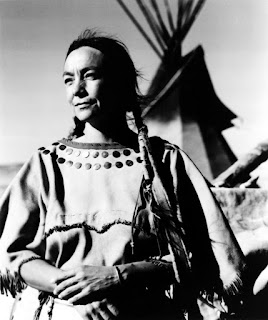 Dances With Wolves won seven oscars in 1991, including Best Picture.  Tantoo Cardinal was a big part of that story.  She played Black Shawl, the wife of Kicking Bird, played by Graham Greene. Looking at her acting credits, which scroll for several pages on the computer, she is arguably the most widely recognized indigenous actress of her generation (according to IMDb).  Tantoo is also a Member of the Order of Canada, recognizing her contributions to the growth and development of Aboriginal performing arts in Canada. 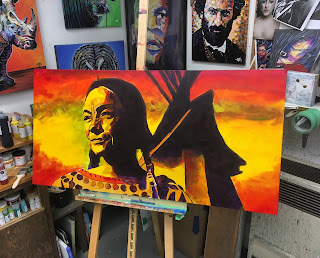 I went into this painting seeing deep yellow, orange and dark reds.  It demanded strong, loamy, and warm earth colours. I laid down several layers before starting to add definition to Tantoo and the teepee in the background. 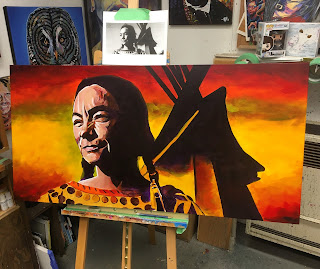 It came together over the course of Good Friday, slowly and surely, while chatting with my new friend Keri-Anne who was working on her own powerful piece in Birdsong Studio. 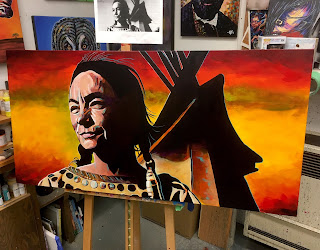 As is my pattern, I came out of the studio at 4 pm to spend a number of hour preparing dinner for our family and taking a well deserved break.  I went back out to the studio to add the final touches and sign it in the evening. 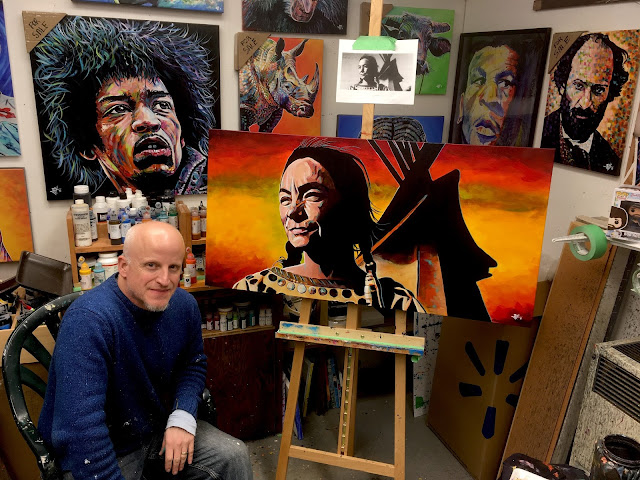 I often tell visitors to Birdsong Studio that it is a very small world.  Paintings that I do in this tiny and cluttered space, often have a way of growing wings and finding their way to friends and family members of the subjects.  In the case of this Great Canadian portrait of Tantoo Cardinal, one of my Facebook updates made its way to her.

"I had an amazing subject," I wrote back.