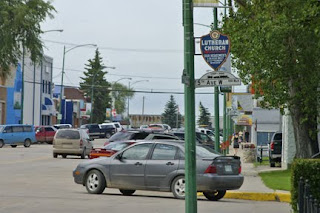 They wave in small town Saskatchewan-a fact that I had forgotten. It doesn’t matter who drives by here in Watrous, they wave. I’m learning to wave back.
We drove across the prairies, from the rolling hills of North Battleford to the water-laden flat lands of central Saskatchewan-sloughs and ditches full to the brim from weeks of moisture. My brother Doug, along with his wife Malisa, and children-Emily, Kade and Anwyn-moved here for a teaching job and have settled in after a year.
Doug is a math and physics teacher at the high school, conveniently located right across the street. He also coaches football, the practice field just a stone’s throw up the road, within sight range from the picture window in their living room. Football is King in Saskatchewan and Rider Pride pervasive, inspiring grassroots football programs that were unheard of back when I was in school.
This community, much like my hometown of Kamsack, popped up on the wild prairie around the turn of the previous century, as a centre of commerce, providing supplies and services to support the burgeoning farming industry.
Watrous, like many of the small towns in God’s country, is an intimate place, where everybody knows your name. It reminds me of the Kamsack that I left back in 1985, businesses thriving, lots of young families-in a word, vibrant.
And as we drove down the highway north then east heading to our next stop, I raised my hand in greeting at those that we passed, feeling right at home in the province where everybody waves.
Email Post