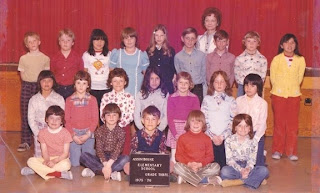 I was standing in line, waiting to pay for the pork roasts I needed for supper yesterday, at the grocery store where I once clerked in the early 1980's. A little old lady was standing in front of me, thin, black curly hair, smartly dressed. As she carefully counted out the exact change for her small order, I began wondering if she could possibly be my grade three teacher from Assiniboine School.
"Thank you Mary," said the cashier, as the old lady grabbed her bag of groceries and ambled toward the front doors.
"Who was that?" I asked, almost whispering.
"Mary Rebalkin," she answered.
"Oh my God! Mrs. Rebalkin!" I replied, in less-than-muted shock.
I paid from my roasts and made my way over to where she was standing, having a conversation with someone she obviously knew very well. I couldn't let the moment pass, so I stood there and waited for a chance to say hello.
"Hi Mrs. Rebalkin," I said, as soon as the opportunity presented itself.
She looked at me for the briefest of moments, then pointed and definitively said "Thomas".
Tears filled her eyes as she reached up for a hug and she began twenty minutes of sharing her life: of not being able to have children of her own, of her passion for teaching, of her love for her husband Mike, of his love of music and guns, and of her intense loneliness and solitude since he passed a few years ago.
The fact that she remembered me at all, from a class of 30 kids back in 1975, is miracle enough. That she remembered my personality and was able to take herself back 35 years years to a school that has long since been boarded up, is astounding. She even remembered my older brother Keith, the fact that he was so quiet and that he came over to Assiniboine School from Victoria School mid-year in 1973-a detail that was previously unknown to me and a memory that was foggy, even for my mom.
"You can ask anyone that went to that school who their favourite teacher was and every single one them would say Mrs. Rebalkin," said my brother Greg.
As she talked, I listened, soaking in a profound love that she feels for her husband and a deep longing to have him back again. I was incredibly moved to be honest, honoured to have been given this moment, a chance for human connection of the most important kind.
Email Post