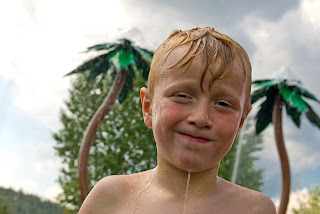 We were asked to participate in a video project for the Public Affairs Bureau of the province of Alberta, as an example of a happy Wood Buffalo family. I had suggested a number of different activities that we could do that would be representative of our life in the north, adjacent to an industry that continues to be pummelled by environmental groups and the press. We spent all of yesterday leading the crew of six around the community giving them a slice of our world.

Our day began at MacDonald Island, meeting the crew just outside the Events Wood Buffalo office: Terri, Marilyn, Mike, Mike #2, Larry and Christy. Terri was the creative director on the project from DynacorMedia in Edmonton. Marilyn was the client, representing the Public Affair Bureau. The remainder of the crew dealt with all the technology: lights, cameras, microphones and recording gear.

From checking out the penguin books at the Fort McMurray Public Library to skateboarding in the Casselman-Lush Park to balancing on a piece of driftwood on the shore of the Athabasca River, Ben had a blast. The highlight of his day in the spotlight had to be his post-lunch romp in the Borealis Splash Park. Mike (the cameraman) just told him to go enjoy himself. From his perch on the northeast corner, he followed Ben with the camera, trying to capture authentic moments of midsummer bliss.

Having a fancy looking camera and a guy holding a boom and a directional microphone caused excitement enough. But when the dozens of children realized that Ben was the subject being followed, they were all over him like bees on honey.

The full day of location shoots came to an end on our front lawn, as some of Heather's most experienced yoga students twisted and turned their bodies for the cameras, and the neighborhood.

In the end, a whole lot of video will be truncated down to a two minute vignette that will hopefully tell the story that happy family life is entirely possible, and quite possibly common, in this place we call home.