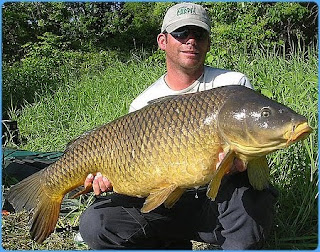 My brother Greg and I had traveled to the bridge near the top of the Lake of the Prairies, south of Kamsack and west of Togo, on Tuesday night. And while we were eaten alive by mosquitoes, we enjoyed watching the huge carp flip flopping in the slow moving waters covering the pastureland of my dad's cousins-the Bowes brothers-the Lake of the Prairies is abundantly high this year as is the water table throughout south and central Saskatchewan. We lost a couple of hooks, got a few nibbles, and I was intent on coming back to try again.

I returned the following morning for a few hours and had tremendous fun trying to hook into something, just to see what I was dealing with. There was a sharp tug on my line, then, “WEEEEEEEE,” as the line screamed off my spin cast reel, before the hook jumped off the fish leaving me short of breath with anticipation.

Prior to going out, I had committed to Ben that I would take him to swimming lessons, so I was counting my fishable minutes and soon had to pack up my gear and race back into town.

The afternoon was destined to be a canoeing and fishing expedition back to Batka Lake with the boys, but fate chimed in and offered up a different plan. At some point during the previous night my brother’s garage was broken into and several bicycles were stolen. The RCMP has arrived early in the afternoon with the forensic specialist from Yorkton to search for evidence, as there had been a rash of thefts in the area. The trip to Batka was off the agenda, and a trip back to the Lake of the Prairies was on.

Over the next couple of hours, I had five of the most incredible fish fights of my life, finding a spooning method that attracted nibbles and bites almost every cast. After about 30 minutes I had almost landed my first (common) carp, but the moment its gargantuan body came partially out of the buoyancy of the water, the weight became too much and the line snapped at the leader, allowing it to escape with my spoon.

Several minutes later, I had one snagged by the tail, as it desperately tried to make its way into the rushing current and through the tunnel that was about 50 feet to my right, just south, on its way to Winnipeg. The beast had managed to crawl just inside the underpass before I started to make progress, grunting and heaving, gaining inches at a time. By the time the fish was just beyond my reach, I realized that landing it was going to be futile as the line once again snapped, the spoon still attached to its tail.

After three more attempts of landing something, I realized that with a net or a gaff hook, I was not going to be successful. And yes, there was a concrete cost with the amount of spoons I was going through, there was a tangible training benefit, experience for when I land the big one back home, that elusive 15 or 20 pound pike.

According to Wikipedia, the common carp can weigh up to 90 pounds and live over 60 years. I was hoping to land just one to get an accurate measure of the weight, but I’m guessing that I was fighting with 25 to 40 pounders. They were as big as a medium sized dog and then some, ugly as sin with a tremendous desire to run-too much fun. The picture above is my best guess at the size of the fish in this particular tale.
Email Post