The train twists and turns, silently carving a path through the Rockies. Soothing, timeless, enchanting, this form of travel has an entrancing effect. It becomes a little more entrancing with the right song on the iPod and a keyboard in front of me.

Heather had spotted this lovely lady in the train station at Edmonton, tall with a lively set of curls and a striking smile. Her and her husband sat behind us at lunch. And while I dashed back to our seats, Heather hung back and had a great chat with Susan Roberts and Jack Wenaus from Edmonton. Jack is a former educator and counselor turned financial planner. Susan is a community development facilitator. I found out all this later when Heather and I tagged off and I was able to spend some time in the dome car lounge chatting them up. Susan was very familiar with Fort McMurray and knew many of the usual suspects when it comes to our community’s development. We had quite a chat. They left the train in Jasper, to cycle back to Edmonton, as a warm-up for their planned Vancouver to Edmonton jaunt later this year.

Meanwhile, Dylan has befriended Nick Mitchell, a 19-year old. They are still up in the dome car, enjoying a chat that is probably into its second or third hour. Dylan is all about social interaction. He especially enjoys older kids and adults. 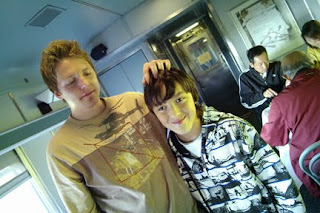 Ben has been a tightly wound top most of the trip so far-we are now somewhere just inside the British Columbia border. He has been climbing, bouncing, running, crawling-all forms of movement, some safe, some not. Club Penguin has provided a link for him and two boys directly in front of us. They have been busy playing since the connection was made, bounding back and forth from the dome car to our seats, a distance separated by six doors.

I spent some time up in the dome visiting a friendly gender non-specific Briton originally from Bavaria. He/she works in a media company producing CD’s and DVD’s and had dashed across Canada with plans to arc down to Seattle, Portland and San Francisco before heading back over the big pond.

We are traveling on one of the busiest trains the stewards have seen in quite some time. There are at least three sets of coaches, each serviced by a Skyline dome and dining car. Near the back of the train is the first-class, or sleeper class coaches and accompanying observation car. It’s an impressive train.