The Town I Lived In 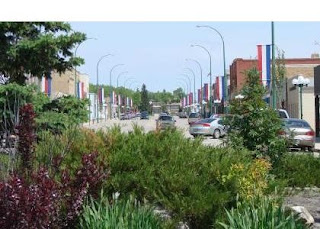 The town I lived in is "a shadow of its former self". This thought went through my mind several times today as I spotted empty lots where familiar houses once stood, buildings boarded up where businesses once thrived, and landmarks of my past, unrecognizable with the passing of the years.
While there are less houses, less businesses, less options, I'm left thinking about the fact that change is inevitable, that it is neither good nor bad, it just is.
When you're young, everything seems cemented in time, never changing. But coming home sporadically over the course of 25 years, the changing of the landscape is much more apparent.
The spruce tree in our backyard, four or five feet in my childhood, now towers over the house, 60 or 70 feet above the skyline of Kamsack. Small shrubs that we once crawled through and around now stand tall and regal. The worn out patch of grass that played host to backyard baseball games has long since disappeared.
With a shrinking population, houses left empty and uncared for, adjustments are being made and progress can be seen everywhere you look. Where there were houses falling apart just a few short years ago, there are now empty lots with manicured lawns. Where there were empty lots in the downtown core there are now gardens and colourful signs.
Kamsack is a town trying to redefine and remake itself. It's a beautiful place, brimming with potential, evolving ever so slowly to become something new. Looking to the future, it is also a place firmly rooted in the past-our family has been resident in the Kamsack district for over 100 years, six generations.
"Looking back over your history in Kamsack, when do you think it was at its most vibrant?" I asked my dad.
"Oh well, let's see," he pondered. "Likely around the time you were born, back when we still had the railway and the refinery." I was born in 1967.
The railway move its operations 50 kilometres west to Canora in about 1978, the refinery burned a few years before that in about 1972.
The town I lived in is still my town. The view from where I sit typing this blog at the head of our dining table looking out over the front lawn, second street and the Rowsowsky house where I spent many nights babysitting as a teenager, is still pretty much the same. I'm looking through new windows-mom and dad had those replaced last year when the federal government had a home renovation program, and there is a new family across the street, but from what I see, the year could be 1985-the year I left, just as easily as it is 2010.
Email Post