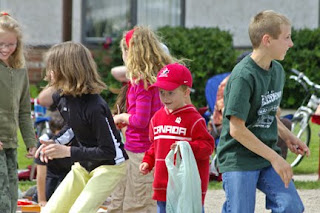 I think Riderville is less about a place and more about a state of mind. We spent Canada's 143rd birthday in the heart of Rider country where being patriotic comes in equal measures of red and green.
The day began with the Canada Day Parade in Drake, Saskatchewan-celebrating their 100th anniversary. Friends, family, residents both past and present, gathered together and recalled memories of having experienced the quintessential small-town Saskatchewan life. Laminated signs had been posted in front of every house in the small hamlet of less than 200 souls, noting the names of the families who lived in them going back to the year they were built.
It struck me how nice it was to be in a community where they can still throw candy to the kids along the parade route. This is a place free of crime, where locking your doors seems pointless and is seldom done. This is a place where families have been born, lived and died for generations upon generations.
I had the opportunity to join my brother's slow pitch team for a couple of games. Sitting here in the dark, looking out at a late night electrical storm, my muscles are aching, feeling every minute of my 43 years. But, it was sure nice to get out there and toss a ball around and take a few swings.
By mid-afternoon the sun was high and the sweat was pouring off my brow. We hopped into Chris and Vic Bergen's dugout, a vast hole in the ground that was left behind after some highway construction and over the years has turned into the family's water supply and supreme swimming hole. Measuring 100 feet across, 200 feet long and some 20 feet deep, this watering hole proved to be the perfect remedy for a very hot summer day.
The evening was spent watching the Rider's game against the Grey Cup Champion Montreal Allouettes. Shades of the disastrous loss in the CFL final game wafted over Mosaic Stadium in Regina as the hometown team executed a thrilling late-game rally to tie the game at 40 apiece. Then, a too many men on the field call almost burst the bubble on what had been an unbelievable football game. But, they pulled it out in the end, winning in overtime.
Screams, cheers and clapping could be heard in full force in the Bergen living room, lined with stuffed heads, antelope, deer, caribou, moose and elk. A full size musk-ox sat stoically, placed behind one of the sofas, a full size bear peered over the railing from the landing above.
Canada Day in Riderville has come to an end and it's time for me to go to bed.
Email Post