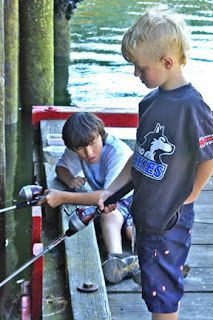 We had walked into the tourist area of Gibsons from our vacation home at Granthams Landing, a distance of a couple of kilometres, stretching our legs, grabbing some ice cream at Mike's Place (best gelato we've ever had) and checking out the remnants of the Persephone (Nick's boat from The Beachcombers). Just beyond Molly's Reach is the wharf and impressive marina, the location for many of the scenes that I remember from the CBC drama that ran from 1972 to 1990.

As we were about to leave, I spotted a young family fishing down below, just around the corner and underneath one of the tourist spots on the warf. I couldn't resist.

Ben and I scrambled down the ramp, excited to see what they were trying to catch.

"What are you going after?" I asked.

There in the bucket was this overgrown minnow, somewhat resembling a walleye, with the sharp fins.

We spent a few minutes trolling for information: Do you need a license? ("No."), What kind of bait do you use? (they were using pork and weiners), Do you ever keep any? ("No. We just put them in the bucket and toss them back when we are done.")

I was stoked. There was a way I was going to get some fishing in this trip after all. I ran all the way back Villa Santa Barbara, hopped in the rental car, and lurched over to the nearest store that might have some semblance of fishing gear-very concerned about timing as it was nearing 5 pm on a Sunday. Thankfully, I landed at a bargain store with five minutes to spare and picked up two children's fishing kits for $20 each. Perfect! We were set.

I tried for a little bit at our pier at Granthams Landing that first night, but the real action started the next day at the fishing spot on the wharf downtown. Dylan ended up catching 15 during two sessions that day and Ben several more. Dylan proved to have the magic touch and the patience. Ben proved to have the luck to lure in a rock cod, an ugly looking spiny creature from the bottom (apparently great eating). 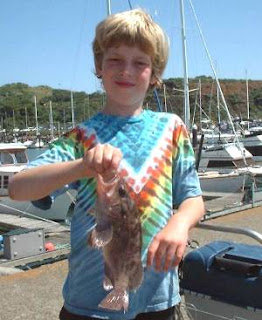 Over the next couple of day we went out several times, eventually getting tired of catching shiners. I became intent on catching the more elusive rock cod. There was no question that my achilles heel was my lack of weight to get my hook down to the bottom fast enough-the water at high tide is probably 30 or 40 feet deep.

I managed to find an old nut, tied it to the end of my line, and gave it a try down at our local pier. Zoom! It fell, right down to the bottom, before the shiners feasting near the surface could devour the pepperoni sausage I was using for bait. A good tug or two and all of a sudden my weight was gone.

Curses!, I thought to myself. What was I going to do now? I left everything and walked up the long pier to the seawall trying to find something that I could tie to the end of the line: a rock, a nail, anything!

A rusted set a chain links appeared and offered a perfect solution to my sinking problem. I walked back down the pier, quickly seeing the gull poking at my bait in the distance.

"Hey!" I shouted, as it continued without pause.

I ran down the ramp as fast as I could and managed to shoo the bird away just before it was about to grab all the treasures inside the plastic bag. (I wondered whether this was the same gull raising three babies on the roof of the house to our left.) 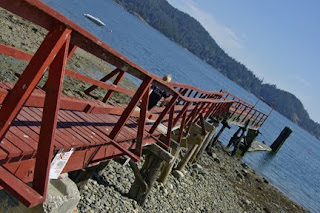 Link of chains secured to the end of the line, I tried again. A another tug or two and again, SNAP, my weight was gone.

Thinking ahead, I wrapped up my bait in the plastic bag, put it in the tackle box and closed the lid, intent on out-foxing that bird. I ambled back to the seawall to look for something heavy one more time. Eventually I found a rusted old spike, a smaller version of a railway tie spike and scrambled back down the pier.

There it was again, off in the distance, playing with my bag of bait.

"Hey!" I shouted again, more forcefully this time around.

I ran back down the ramp, trying to wrap my brain around how it got into the tackle box. I got to the bottom and watched as it flew away, bag of bait secured in its mouth, likely smirking to itself and thinking Dumb human!.