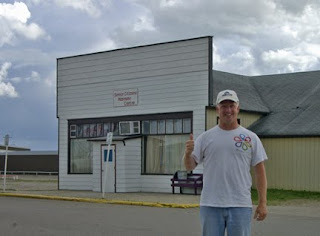 They were short one person for the whist tournament at the Kamsack Senior's Centre, so I was drafted into service by my dad. I was the youngster in a group of 12 that included mothers of several people I went to school with, a world-traveler and educator, and a former military man from the Korean War.

This was my first visit to this gathering place that provided hours of socializing for my grandparents in the past and provides hours of activity for my parents in the present. I think my dad said that the building was once used as a Massey-Ferguson dealership. Clad with faux wood paneling and worn out carpet, the centre has two rooms, one with tables, a kitchenette and piano. Bingo cards are scattered about, ready for one of the regularly scheduled activities.

In the centre of the room, adjacent to a doorway that leads to another large room with several billiard tables, is a bulletin board and chalkboard that has the list of current members, numbering around 25 or 30, and the names of the executive committee spelled out using stencils-the old-school style of only listing the initial of the first name followed by the last. My dad is Treasurer-C. Thomas.

There are more women than men, likely a normal state of affairs as the men in this part of the world tend to go first-lots of widows. The whist tournament is set-up with the men against the ladies, so several women are tapped to join the opposite sex, wearing a flower on their upper left chest as a temporary badge of honour.

Mrs. Sembaluk was particularly gracious, familiar-certain to have been a regular customer when I worked as a grocery store clerk in the early 1980's. She would turn to ask a question and put her hand on my arm, the way my grandfather used to do.

Mrs. Ewacheski is a fireball, Jane and Pam's mom. Jane and I graduated together back in 1985. Pam is a little older, the town's former mayor.

Mr. Kaushik is a sprite old fellow, former school teacher and world traveller, originally from India. He talked in a speedy tongue of growing up in the middle east, of teaching in Ethiopia and of history, which is obviously a passion. A lover of languages-he speaks several, including Punjabi, Arabic, several dialects from Ethiopia-Mr. Kaushik is a master of word play and challenges me on several occasions during our 30 minute game.

"What is the meaning of mind," he asked.

"It is the connector of threads of thought," he said.

The last player to arrive was Ross St. John, the type of character who takes over the room the moment he walks in. A recent a arrival in Kamsack, within the last decade, St. John is originally from Ontario and a veteran of the Korean War.

"What did you do for a profession," I asked.

"Oh gosh, where do I start?," he began. "I did so many things over the years. I was a cryptographer, a signals man, a radio operator-a little bit of everything."

I ended up getting the high score among the men and won the grand prize of a toonie, which I happily "donated back to the cause."
Email Post