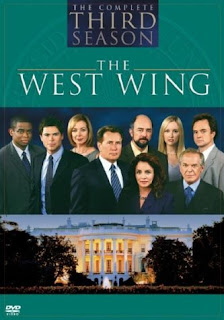 Heather and I have been tearing through the early episodes of The West Wing. Season One, which ran from 1999 to 2000, was outstanding. Season Two which ran from the fall of 2000 to the spring of 2001 was even better, especially the season finale when the President (played by Martin Sheen) is about to answer the question of whether or not he'll seek a second term. In light of his recent disclosure about having a form of multiple sclerosis, going for another mandate was very much up in the air.

Brimming with anticipation following the season finale, we popped in the first disc of Season Three, excited to get some closure. Instead, an error message came up on the screen, something about the disc not being programmed for this area. We popped in disc two thinking the first was just a faulty. Nope, none of them worked.

That was last night. Tonight, we thought we'd be very clever and watch it on the laptop. It seemed like a brilliant and cost-neutral proposition, and for a few seconds seemed like it was going to work, until the picture froze-the minimal RAM on my machine struggling to keep up with the amount of data streaming through its innards.

"Maybe they'd have it at Walmart," I suggested.

"We could do that, I could run out," she offered, bereft of any real intent to hop in the car and drive the five or six blocks to the shopping mecca just down the street.

I raced over and darted through the store, narrowly missing one distracted shopper after another. My eyes quickly scanned the movie section, once, twice, three times before The West Wing, Season Three, reached up and smacked me in the head. Apart from several copies of Season Seven, Season Three was the only other selection, and to beat that, there was only one copy of that season.

"The West Wing Gods were smiling," I quipped, coming into the living room, armed with the good news.