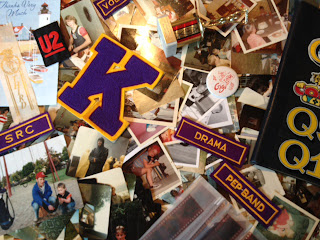 We are keepers.  Somewhere in our DNA we have been programmed to hold onto things, little bits of memory that connect us with long-forgotten events and milestones.  I'm particularly endowed with this incessant need to harbor myriad objects, papers, photographs, newspaper clippings and assorted trinkets. In fact, I have a new box of memories - as several others are full to the brim, stored away in the dark recesses of our basement - tucked under my desk, just to the right of my big toe as I write this blog post.

I'm not certain what inspired me to grab one of the older boxes and begin the first cull.  I say "first cull" because I clearly understood when I started yesterday evening, that this was going to be a long and extended process of letting go, of releasing myself from the physical tethers to memories of long ago.  This may end up being the first of many culls, stretched out over a number of years.

Mining through the memories, there were certain things that easily found their way into recycling containers or into the garbage:
But buried in the detritus of my messy box of memories are also items too precious to part with, things that open the curtain to a story that one day might be worth telling to whomever might be willing to listen, items that inspire laughter, tears, gratitude.  These are a few that survived the culling, to live another day:

I feel good for having started this process, for vocalizing more than a number of times "this means nothing to me", and following that assertion with a decisive toss into the recycling bin.  The box of memories, now significantly lighter, will return to its appointed place on the shelf in the basement, until the need to de-clutter hits me again somewhere down the crazy river.
Email Post