We were up in the media centre - a scaffold structure facing Rink #3 at the HNIC's Play On! 4 on 4 street hockey event at MacDonald Island - the gathered celebrities tagged to play against each other, black shirts vs. red, at high noon.

Crammed fairly close in those tight quarters, I was literally rubbing shoulders with Olympic gold medalist, Hayley Wickenheiser, one of the most lauded female hockey players on the planet.

"Sorry," she said, after bumping me in the middle of one of my tweets.

"No worries," I said, in semi-awe of this young lady who has lit up a nation on more than one occasion.

She was the captain of the other team - the red shirts.  Our fearless leader was Bobbi-Jo Slusar, another acclaimed hockey player and former member of Canada's women's national hockey team.  I felt right at home with the both of them, possibly because we all come from the mighty green province to the east.

It had probably been near on 30 years since I played a game of road hockey.  As a kid, we played for hours on end, usually in the deep dark days of winter and usually with a soft rubber puck.  I don't recall playing with the orange balls that they use for this event, primarily because they would turn rock hard when it was below zero, and were plumb dangerous to use.  They never got used in the summer either, as far as I can recall, because the hockey sticks didn't come out very much when we had the option to be at the lake or the swimming pool.

Mayor Blake dropped the ball - a good thing in this instance - to set the Celebrity Game in motion. It was back and forth, relatively even for the first bit, before Team Wickenheiser started to pull away, primarily on the strength of Paul Strand and Jamie Clinch setting up the incredible Collin Feser.

We had a couple of big guns, including the wicked wrist shot of Steve Jani, the behind the net prowess of Leithan Slade, and the tenacity of MLA Mike Allen, but it wasn't enough.  We didn't win, "but we were still AWESOME," as I wrote on Twitter.

Thank goodness we had enough guys to switch out every couple of plays, because several of us more senior players were huffing and puffing.

"Didn't anybody tell them we're the arts guys?" asked Mike Allen, looking a little tepid on his toes in between shifts.

At one point I was in the squat position taking a desperate slug of water.  When I lifted myself up, my head started to spin and it took everything I had not to pass out.  The moment passed, my turn to play came up, and I rifled off three shots on net within a few seconds.  I didn't score, but I'd like to think I made the goalie work a little bit.

The HNIC's Play On! event featured 10 rinks, lined up on the west side of the road leading onto MacDonald Island, and 74 teams.  They picked a perfect - or not-so-perfect, depending on your point of view - day for it, as the sun was in full bloom with temperatures in the mid-20s.  Parents, supporters, volunteers were out in the hundreds as Fort McMurray hockey enthusiasts - young and old - took Canada's game to the streets. 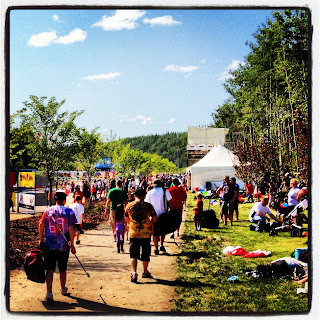 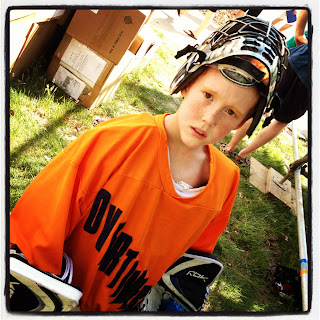 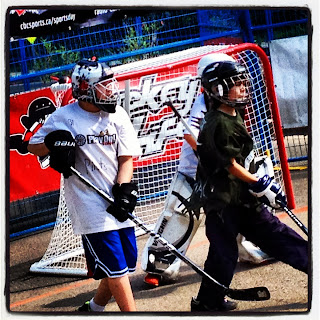 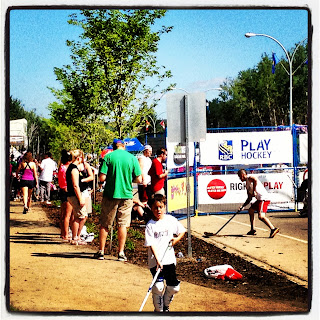 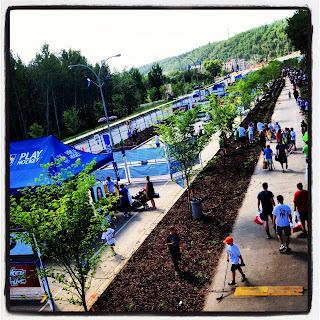 Thanks to the gang at Play On! for allowing us to relive our youth, during 30 action packed minutes of street hockey.  It was a blast!
Email Post