"The study tours are the best," said Mayor Blake, after returning from last year's FCM (Federation of Canadian Municipalities) Conference in Halifax.  The observation stayed with me as we began the first full day in Saskatoon, as mayors, councillors, CAOs, reeves, aldermen, and myriad municipal officials gathered from across the country for their annual conference and trade show.

Shortly after the opening ceremonies, which in true convention style, went way too long - I felt incredibly bad for the host, Dennis Trudeau, as he was left smiling and standing through the whole thing --  I was waiting for him to pass out - I went out the side door of TCU Place (formerly the Centennial Auditorium) and on to the bus.

I had chosen a tour called Urban Reserves - From Partnerships to Prosperity.  In the years that followed after I left Saskatoon in the late 1980s, a deal was struck between a number of First Nations and the City to establish an urban reserve on a patch of undeveloped land east of Sutherland.  Designated for only entrepreneurial activities, the multi-acre site now has a number of thriving businesses that have created a revenue stream for the band, employment for its members and a healthy relationship with the city.

After we enjoyed some amazing bannock sandwiches, we hopped back on the bus to see a similar business development just outside of city limits, on the west side of the highway going to Regina.  Again, providing both a revenue stream and employment opportunity, the Grasswood Travel and Business Centre - a development of the English River First Nation was started with a nominal investment which has escalated to a combined property value exceeding $25 million. What a success story.

In the afternoon, a healthy group of us - including Calgary Mayor Nenshi - gathered for the Public Spaces and Urban Activity walking tour of downtown Saskatoon.  Through an innovative program of using a percentage of parking meter revenue (44%...I believe) and working collaboratively with several business improvement districts and the Meewasin Valley Authority, the City is turning the urban landscape into a more livable, walkable, vibrant place.

As I strolled, it felt like I was looking through a crystal ball, seeing a glimpse of what downtown Fort McMurray will be like in a couple of years.  Councillor Vinni was equally impressed, though his comment was that ours will be even better.

I love the wonderful trees lining the street that connects the historic facade of the Midtown Plaza with the Bessborough Hotel, also the benches, pocket park, street vendors and poster boards. 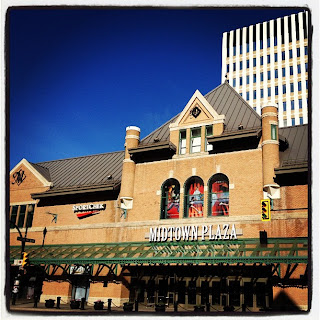 I did not like the fact that I had to walk six or seven blocks with my empty water bottle in hand, waiting to find a recycling container.  But, that's something they're working on, according to Liz, our tour guide.

Through the parking meter revenues, they are able to do about one city block a year, at a cost of $1 to $1.5 million.  The results are evident, though some work remains to be done, as admitted by City Councillor Charlie Clark who shared his perspectives a number of times on the delightful walk.

"We still have to fill in some toothy gaps in our smile," he said.  "For instance, we have a beautiful Holiday Inn surrounded by huge unsightly parking lots, right across the street from our convention centre.  What does that say?" 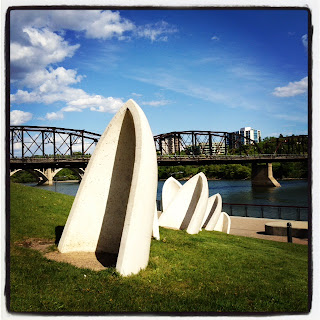 The good news for the City of Saskatoon is that they are taking a long-term strategic approach to their city centre and are making progress.  Their approach, one of observing how people use the urban landscape, and making improvements that make it a more attractive place to live, work and play is very similar to what we are doing 8 hours northwest of here in Fort McMurray. 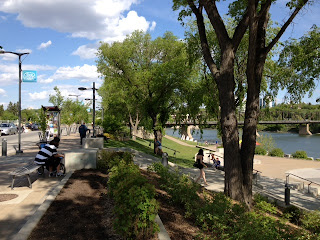 Our tour took us to River Landing, a great park along the South Saskatchewan River, complete with a water feature park that had just opened for the season.  Adjacent to the Remai Arts Centre, also home to Persephone Theatre, this development creates a wonderful riverfront amenity that celebrates one of the city's greatest natural assets. It's wonderful. 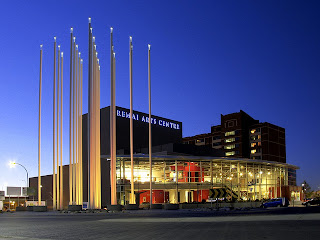 I appreciate the efforts and the energy that went into executing both of these tours.  To say I got value from them would be a tremendous understatement.  I look forward to trying to weaseling my way into a couple of other ones in the days ahead.
Email Post