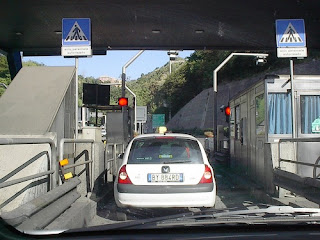 I have to admit that when Heather and I returned from Italy in 2006, I had toll booths on my mind.  There were a number of cities that required visitors - in our case, a bus full of Canadian tourists - to pay an entrance tax.  The tour guide said that those funds were used to keep the community clean and the roads in good repair.  Thinking of Florence, one of the world's greatest tourist destinations, the revenues must be mind-blowing.  But I promise you, that after a bustling day with tens of thousands of tourists and lots of detritus being thrown about, the following morning the city streets were pristine.  It was magical.

Facebook question: "One of the possibilities being circulated about Highway 63 is the idea of moving to a toll booth scenario.  How would that sit with you? And if this happened, who should pay? Everyone or just visitors?"

"When we were in France and Italy, there was a lot of toll booths," wrote one person in answer to my question on the subject on Facebook.  "The roads were great, smooth, no potholes, clean and landscaped. I'm not opposed to that.  Everyone should pay."

"We already pay a toll," wrote someone else.  "It's called taxes."

"I think McMurrayites (and I include businesses in this terminology) have paid for the twinning of Highway 63 in the form of lives, lost production, missed appointments due to delays/detours on the highway, royalties, and the list goes on," said yet another opponent to the toll approach. "The government needs to put money into this highly utilized route NOW and maintain it similar to other highways in the province that see far less traffic. NO to a toll booth as another form of gouging those that have no choice but to travel Highway 63."

I would posit that most people in Wood Buffalo would be of the mind that we contribute enough to the provincial coffers and that we have more than earned a fully-twinned highway.  Certainly, this unscientific poll suggests that there would be fierce opposition to this strategy.

The reason that the media is swirling around this issue is a response that Premier Redford had to the question of toll booths earlier this week. They smelled blood and away they went.

My sense is that in deference to the process that special advisor, MLA Mike Allen is going through in working with a determined team to deliver a report on how to twin Highway 63 faster by the end of the month, she didn't want to take anything off the table, as she had directed our Fort McMurray-Wood Buffalo representative to explore all options.

Transportation Minister Ric McIver confirmed that assessment in an Edmonton Journal story that is online today where is says that "No one should believe today that there has been a decision made to turn Highway 63 into a toll road."

This might be a very different debate if toll highways and roads were more common in the province of Alberta.  Because the only toll scenario that pops to my mind is the Coquihalla Highway in British Columbia, I fear that taking the first step toward tolls in Alberta on Highway 63 would cause an uprising in Wood Buffalo.

"Was there a toll road for the Anthony Henday in Edmonton?" asked one respondent to my Facebook question.  "That was built quickly. There is enough money. Money is not the issue - priority is."

"No no no," extolled another.  "Why can't they just get on with what they're supposed to do.  Isn't this region big enough, important enough to deserve a proper highway built with some of the tax dollars they get from us."

My opinion is that we shouldn't go off on a tangent and distract or derail the process that is in place to establish a better, more expeditious, path forward.  The media (God love them) has pounced on this toll booth comment and are playing it for all it's worth.  But, time is of the essence, and June 29 - the date the report is due on the Premier's desk - is coming quickly.  Valuable hours are being tossed into the ether by the media storm that has whipped up in recent days.

The "why" of this twinning project's abject failure is complex, and playing the blame game isn't going to be constructive.  I believe that the Premier has empowered Mike Allen to do whatever it takes to look at all the options - of which a toll approach would be one - being very careful not to impose solutions or ruling out options in the middle of the process.

Do I believe for a second that residents would have to pay a toll to drive home to Wood Buffalo?  Absolutely not.

Do I believe that the reason that Highway 63 has not been twinned yet is because of a lack of money?  Nope.

Do I think that this construction process, and the communication that has surrounded it, has been a morass?  Yes, I think that is a fair assessment.  It's been an enigma wrapped in a riddle.  Frankly, it's time to cut through the crap and "get 'er done" as one local political wannabe said during the last municipal election.

I believe that Mike Allen, Don Scott, their cabinet colleagues, and Premier Redford are intent on doing just that.

I could be wrong, blissfully basking in my perpetual optimism, but I have no reason to believe otherwise.  I choose to believe that "getting it done" is exactly what we're going to do.