Some Glen with your toast 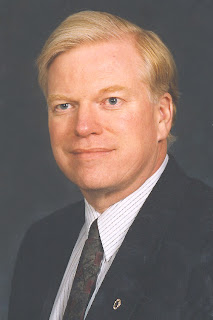 I've known Glen Laubenstein - CAO of the Regional Municipality of Wood Buffalo (RMWB) - for a long time.  He was the Regional Manager back in 1996 when I first moved to town, less than a year after amalgamation.  I was working as Senior Program Director at the OK Radio Group and often had occasion to bump into Glen at the myriad community events we both attended.  We were also somewhat connected through his daughter Sarah, who was a talented actor in the drama program at the time, now a successful CBC news anchor in Winnipeg.  She played one of the leading ladies in Twelfth Night, a 99-Cent Theatre production - my first performance opportunity in Fort McMurray.  I played a goofy Sir Andrew Aguecheek, complete with oversized red shoes and a physicality that I kept up through the whole show that suggested that I needed to go to the bathroom in the worst way.  Apparently, it was pretty funny.

Glen left us to pursue exciting leadership opportunities in various cities including Kingston and Winnipeg before returning to Fort McMurray in late 2010.

Prior to starting his current tenure as CAO, he returned for the Oilsand Banquet in honour of the 15th Anniversary of the RMWB. 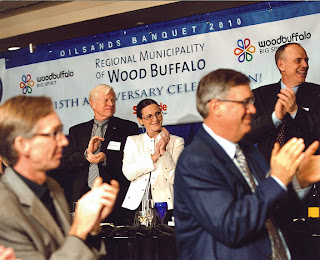 That was in the fall of 2010, in the heat of the municipal election campaign. I went up to him to say hello and there was immediate recognition, though we hadn't seen each other in over a decade.  I've since had the honour to get to know Glen very well, sitting as a member of Council for almost two years now, and certainly consider him both a mentor and friend. 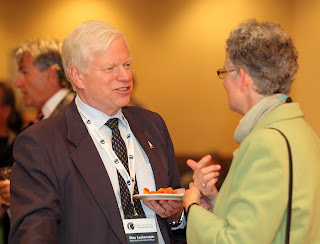 I am quick to realize that most people don't get the chance to enjoy Glen's wisdom and stories, the way that some of us of do.  That's why I'm particularly excited to write about the Leadership Breakfast happening on June 20th in the Miskanaw Ballroom at the Suncor Community Leisure Centre.  Glen is the keynote presenter at the awareness and support-building event for Leadership Wood Buffalo being hosted by a mutual friend of ours, Ken Chapman, the ED of OSDG (Oil Sands Developers Group). 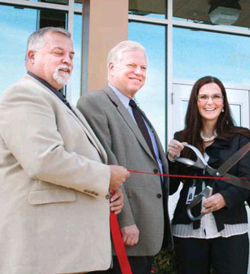 Glen's going to be talking about his servant leadership philosophy and how it has helped guide his career as a senior administrator of municipalities.

"What is the single largest gap in Alberta and in fact, across the country?" he asked me last night.

"The way we need to work today is radically different than the way we've been taught to lead for the past 200 years."

"If you're a leader and you're looking for recognition, get out of the game," he said.  "Charismatic leadership doesn't work.  Jim Collins got it exactly right in Good to Great."

Glen has shared his leadership philosophies with influential groups from across the country and is eager to get in front of a local audience.  If you've heard about the guy who has shaken things up in Wood Buffalo and been a catalyst for fundamental change in how we operate and develop as a community, but haven't had a chance to hear him in person, this is a great opportunity. 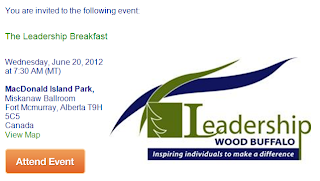 The Leadership Breakfast is primarily a networking opportunity and a chance to create some additional awareness and support for Leadership Wood Buffalo (LWB), a program that is directly dealing with the gap that Glen identified last night.  Over six full cohorts - the most recent being the largest, and arguably, the most prolific - we (I sit on the board and an alum) have graduated over 100 community leaders, many of whom will be enjoying some Glen with their toast next Wednesday. 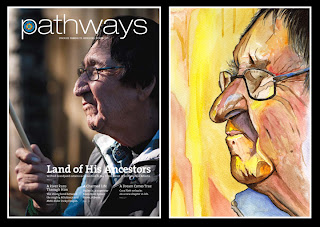 The event is also a fundraiser of sorts, and a few silent auction items will be available for some early morning bidding.  I'm donating one of my favourite paintings, a portrait of Wilfred Grandjambe from the cover of Syncrude Canada's most recent publication of Pathways (see the source photo compared to the finished watercolour painting above).  I hate to part with this one, a piece beautifully framed by my good friends at Frames and More, but it's a great cause and an organization that I'm particularly passionate about.

The Leadership Breakfast is an excellent networking opportunity and will include a first-class breakfast, and a compelling preview from Mr. Laubenstein of some of the remarkable developments that will redefine our downtown in the coming years.

If you're interested in donating a silent auction item and getting it in front of this influential group of community leaders, contact Cathy Baker-Morrell, LWB Executive Director, at 780-838-3883, or email ed@leadershipwoodbuffalo.com.
Email Post