(An attempted capture of a speech delivered on June 22, 2012 at the McMurray Gospel Assembly to high school graduates from THE EXPERIENCE program) 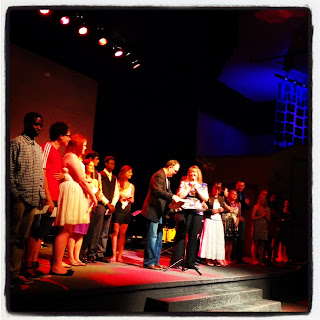 I'm so pleased to be here, especially with my son Ben, as the last time he saw me in a church it was for my grandfather's funeral.  He was 99 when he passed and I helped deliver the eulogy.  I was a blubbering fool by the time we were finished.  Not the best memory in the world for my son. I hope I do better this time.

First of all, congratulations. Finishing high school is a big deal….don’t let anyone you differently.

I LOVED high school, I won’t lie to you. I loved it so much, that I would pack my bags early in the morning, walk that half a block to the Kamsack Collegiate Institute and arrive just a few minutes after the janitor – long before the first teachers would ever showed up. I just wanted to be there.  I worked hard, played hard and studied hard.

It was in those years that I learned that effort equaled reward.

Then I went to university, where I discovered that life wasn’t so black and white, that effort didn’t always equal reward, that life was more complicated that it first appeared.

Two years of struggle, bookended by a lack of academic success and a flurry of real-world practical experience as the producer-director of a small acting company, and I had had it. I had to get out.

I found a job as a donut baker. And thanks to an idea that was drilled into my head by my father that “any job worth doing is worth doing well”, I set out to be the best darn donut baker I could possibly be. I discovered success flipping hundreds of thousands of donuts in a deep fryer over the next two years of my life. I was not just a good donut baker, I was great donut baker…..and I was proud of that.

Eventually the wind blew me into broadcasting school – WABC – a small independent radio academy on the dodgy side of Saskatoon, where I paid a whole heap of money for a couple of month’s of instruction before landing my first full time gig in Fort St. John, BC.

And when I listen back to what I sounded like in those years, I blush with embarrassment, because I really sucked. But I gave it 100% effort, 100% of the time.

I recently reconnected with my boss from that first radio job, Ray Telford, and he shared with me how much he enjoyed listening to me in the evenings and that he had never had a disc jockey who put so much effort into preparing for his show.

So, even though I really sucked, the effort that I was putting into preparation and the attitude with which I was doing it, was remembered….after more than 20 years of life had passed under the bridge.

I kept at it…got better, was given leadership opportunities……through years when I was making $900 per month BEFORE deductions.

I could get hit by a bus tomorrow, shuffle off this mortal coil, and I would be OK with that.

I’m not rich, nor famous. I’m not overly powerful nor remotely intelligent. But I’ve been successful in my own way, influencing and supporting my family, friends, colleagues and community.

There are three things that have guided me from being a 90+ high school student to being a university drop out to being a senior leader at a college to serving the public good on council.


1.  Any job worth doing is worth doing well – my father instilled in me this idea that giving every job its due was important. Whether it was painting the chimney, weeding the garden, planning a festival, or engaging in social media….giving 100% effort, 100% of the time was full-proof.

2.  Embrace failure – one of the mantras of my life is that “the seeds of my success are sown in soil rich with failure.” It is important to embrace the fact that to be successful in life, you’re going to have to fail first.

I was raised Catholic and was married in about 1990, a marriage that ended in divorce shortly after.  It was certainly one of the hardest things I ever went through as it forced me to learn to accept a very personal failure that hit me to the core.

In the early years of interPLAY we experienced huge failure. We had very little money, a broken reputation, and a core group of volunteers who were giving it everything they had. But we kept at it, and with each passing year we failed less and less, learning as we went.  Eventually, failure became success, and the festival that you know today.

A former boss of mine, Wray Betts, taught me to re-frame failure, to turn it on its head and use it as a learning moment or a growth opportunity.  I will also be grateful to Wray for passing along this invaluable perspective.

3.  Listen to the wind – God/the universe/the wind speaks to me every day. I’ve learned to pay attention, to trust in the universe, to listen to the wind. It provides the right answer 100% of the time.
An example from six years ago is when I was first asked to participate in the Leadership Wood Buffalo program. The offer fell out of the sky and my wind was telling me that this was something important.  It was, and continues to be, a transformative force in my life and in the life of this community.

An example from last weekend revolves around a tweet I received from Tim Hurson, author of Think Better, suggesting that I consider attending something called Mindcamp in August.  His suggestion led me to the website, which I kept going back to throughout the day.  By that evening I tuned into what the wind was telling me, and starting adjusting the accouterments of my life to get me to a camp near Orillia, Ontario to discover, learn, engage, be inspired, for reasons yet to be determined.

Earlier today I finally took action on a television series box set that had arrived in the mail recently.  I had ordered it months ago and complete forgot about it.  Heather and I ended up buying the series on iTunes and watching it from beginning to end.  So, I had this unwrapped treasure sitting on my desk, a television show that is among the best I've seen (Breaking Bad).  So, I decided to create PAY IT FORWARD FRIDAY.  I put out the offer on my Facebook that anyone who was willing to acknowledge someone who made a positive difference in your life this week would go into a draw for the set.

I had a number of responses, then Nikki chimed in from Montreal.


NIKKI: I've already seen the fourth season (edge of my seat the whole time!), so don't include me in the draw, but I felt like sharing this little story:

It has been a very stressful week. After a meeting with HR at work, I decided to sit on a park bench outside my building before my shift. I was visibly upset and trying to regain some composure. A scraggly, homeless-looking man came up to me.

I looked up at him.

"Could you give me a smile?" he pleaded.
I did, and he walked away pumping his fists in the air. It made my night.


Give life your 100% - take failure and give it a big hug – and allow your higher power to guide you where you need to go.

Do these three things and success will be yours.

Special thanks to Pastor Rick Kirschner, for inviting me to speak at this celebration of success, and to the members of the McMurray Gospel Assembly for always making me (and us) feel so welcome.  I enjoyed meeting some great people, having some rich conversations, and being able to share a couple of stories.