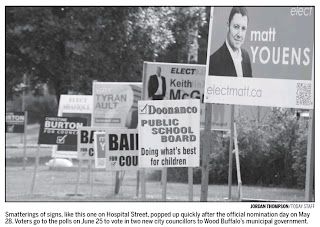 For 14 candidates in the Regional Municipality of Wood Buffalo by-election, this is a day that couldn't come soon enough.  Many of them are wrung out, after attending every public event they could find, going door to door, and managing their inventory of signs.

After all the articles have been read, videos watched, Talking Stick answers reviewed, candidate visits completed, it comes to one fundamental choice that you need to make, or, in this case, as many as two choices.

Money has been spent to influence your vote, I can promise you that.  It takes substantial financial resources to have a meaningful presence on our highways and byways.  Someone pleaded on Facebook for voters not to base their decision on the candidate who had the biggest, brightest and most signs.  That would be asinine right?  Sadly though, the reason signs get erected in such huge numbers is that they really do influence the electorate.

Out in my backyard, I have several thousand dollars worth of signs in storage, ready to be dusted off and made ready for the general election in the fall of 2013.  I would be very interested in talking about ways to reduce the number of signs, whether that be by splitting Fort McMurray into a number of wards, thereby reducing the size of the geographical footprint candidates would have to cover, or looking at limiting the number of signs candidates are allowed to display.  I don't have the answer and I don't know the nuances of the legislation that would be required, but I'd love to have that discussion.  I would be quite comfortable keeping the bulk of my signs on ice (or in dust), if we made a shift in the rules.

I've been very resolute in not endorsing any one candidate, rather choosing to celebrate the process of civic engagement.  I've done what I can to share information, news stories, and resources to provide voters with every opportunity to learn about the people running.  I particularly enjoyed the character revealing questions suggested in one Facebook conversation string.

I believe that the voters got it right in 2010; I trust they are going to get it right today.

We have made tremendous progress as Mayor and Council, as a region, and we look forward to welcoming two new members to the team. 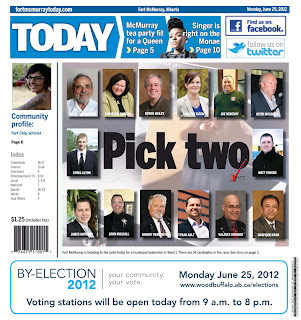 I'd like to take a moment to thank all 14 people who had the courage to let their names stand in this by-election: Bill Nahirney, Christine Burton, Byron Bailey, Colleen Tatum, Joe Nebesny, Keith McGrath, Chris Alton, Matt Youens, James Anthony, John Mulhull, Robert Parmenter, Valance Howard, and Shafique Khan.  They all have something very integral in common: a love of this region, and the will and determination to contribute to its future.  Behind each and every one of these fine people are family, friends, colleagues and supporters who have made this 4-week campaign journey possible.  They deserve our thanks, too.

Shortly after the polls close, we'll start to get results that might suggest the eventual outcome.  But with 14 candidates and only two seats, the potential for surprise is very much in the cards.

Let me close by encouraging you to encourage others to get out and vote today.  Municipal elections in this region typically result in a dismal voter turnout.  They say by-election are lowest on the totem pole of civic engagement.  You have the power to turn this reality on its head, by talking to your friends, family and co-workers and inspiring them to get to their friendly neighborhood polling station before this thing wraps up at 8 pm.  Perhaps you can email them this link to make it easy for them?
Email Post