I got the SIM error message around 10 am the day before.  No emails were coming in or out of my BlackBerry, and access to the Internet was gone.  For the first time in recent memory I was cut-off from my virtual life.  After about eight hours I joked in a Facebook post that I was starting to get "twitchy", to which my wife quickly corrected with "TESTY".

"Was I really testy?" I asked, thinking in my mind that she was just being jokey.

I knew that we were scheduled to switch carriers and devices at work on Monday, and after confirming that there was nothing wrong with the device, it became clear that something had happened on the back-end, that computer space hidden in the shadows that we are powerless to control.

The old carrier had "ported over" my phone number to the new carrier and device-yet-to-be-delivered several days earlier than planned.

The clock ticking, knowing I had to be at the airport mid-afternoon for a flight to Saskatoon to attend a conference, "testy" was bubbling into "tempestuous".  Tick tock. Tick tock.

"You were one of two phones they screwed up on," said the person in our world who handles these kind of things.  "They said that if you wanted to go pick up your iPhone today, that would be the best solution to get you back online."

My cerebral cortex dashed into action, calculating the things still undone that needed to be done, clothes that still needed to be packed, and the declining number of minutes I had to do it all in -- not to mention the angst my brain goes through when trying to figure out new technology.  Tick tock. Tick tock.

Yes, I was an iPhone virgin.  I know millions out there are laughing at the notion that this ubiquitous device was foreign to me, but there's the truth of it.

I picked up the sweet little Steve Job's inspired iPhone box, bought a clip-on thing so that I had somewhere to put it, and zipped over to the house to get the rest of my life in order to allow for a timely departure.

God love Dave Benoit - a fellow Leadership Wood Buffalo alum, and one of our fearless IT professionals at Keyano College - who provided me with step-by-step, easy to follow instructions that resulted in all of my emails, contacts and calendar items flowing into this 2.31" x 4.5" slice of heaven within minutes.

In between slamming my suit jackets and pants into my suitcase and finding the right number of socks for the number of days I would be gone, I got Twitter and Facebook apps uploaded and operating.  As I tossed in required cords, notes and necessary accouterments, I figured out how to get the thing to stop chirping, beeping and vibrating -- every 15 seconds it seemed, as each email, notification, and reminder triggered some kind of response.

By the time we made it to Calgary, a necessary leg on route to the City of Bridges, I started remembering that most iPhones that I had seen had some kind of skin or protector around it, while I had none.  I also started remembering the fact that both of my sons had smashed the screens of their iTouch devices within hours of getting them out of the box.

Seeing an iStore in #YYC, I did what I often do when I'm perplexed about something I know little about -- I ask my Facebook friends for help. 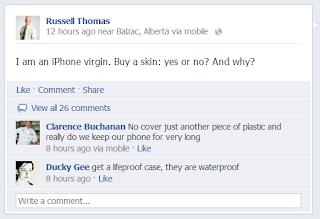 Within a matter of a minutes, 26 excellent and passionate answers were shared, and with seconds left before boarding, I walked into the store.  Tick tock.  Tick tock.

"I'm an iPhone virgin," I said hurriedly. "I need something called an OtterBox."

"Well, we don't have an OtterBox," he started, "but we have something even better," as he pulled out a Griffin.  At this point, I'm was feeling like I was in an alternate universe where everyone speaks a language I just don't understand. 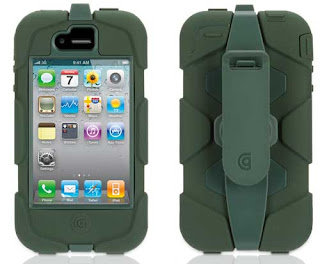 "I'll even put it together for you," he offered.

Thank God! I thought to myself as I heard the call to board message off in the distance.

Sitting there in the waiting area as the first-class passengers made their way through the gate, I snapped my first picture - a portrait of an iPhone virgin. 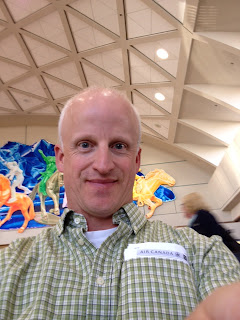 Journey completed, I unpacked my things and marveled at how quickly the power was draining on this thing. I plugged it in, turned off the lights in my room on the third floor of the Bessborough Hotel in Saskatoon and called it a day.  From twitchy to testy to totally tepid, I was ready from some sleep.

I shot awake at 5 am and looked out the window to see a bright beautiful morning, the orange rays of the sun glimmering off the windows of the adjacent high rises.  I tumbled out of bed and captured the moment on my new companion, downloaded the free Instagram app, and uploaded it to Twitter.  In the wee small hours of the morning, in the alluring warmth of the Saskatchewan sun, I was an iPhone virgin no more. 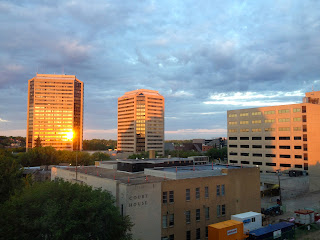