I had woken up several mornings ago with a single sentence at the tip of my tongue: "Faith, hope and love. But, the greatest of these is love."  It was the answer to my unspoken question of how to integrate words into my second mural of Metis elder Elsie Yanik.  The quote from Corinthians in my mind, I was ready for yesterday's Day of Caring project at the Salvation Army. 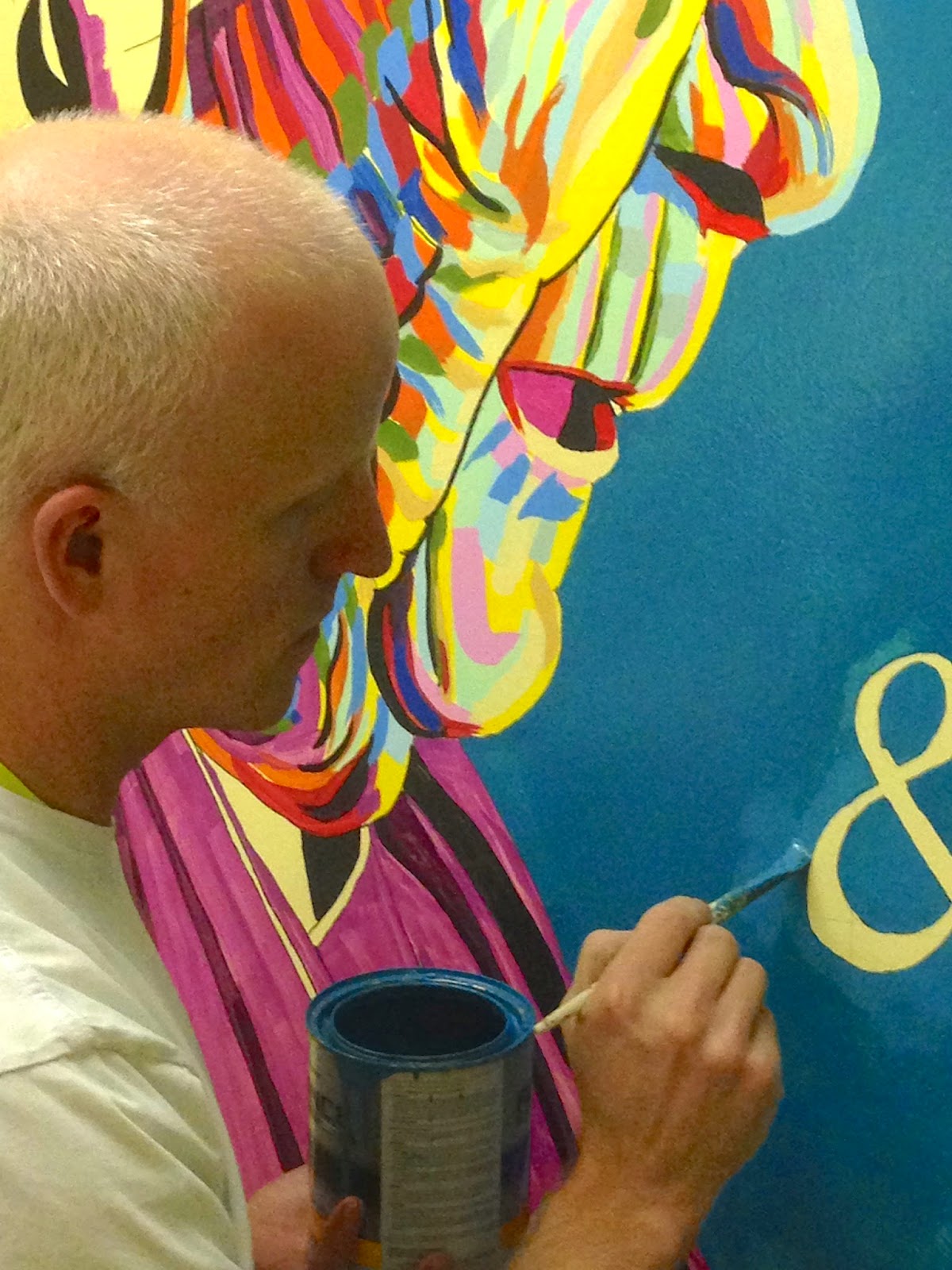 Thanks to my good friend and filmmaker Tito Guillen, you can watch a time-lapse video of the making of the Elsie mural.  Turn up your speakers, grab a warm beverage, and sit back and enjoy.

Here is my memory of the day.

7:30 am:  I began the process of loading up my gear into our Ford Escape.  The paint was put into two plastic utility shelves that are constant companions in my shop/studio.  They were pretty heavy, but held up as I carried them from the backyard to the vehicle in the front.  I was having visions of them following apart and paint spilling everywhere.  That's one premonition that I'm glad didn't come true.  My old drop cloth, stir sticks, and rulers tossed in the back and I was ready to go.

7:55 am:  Arrived at the Salvation Army and got someone to open the door to the Mat program so I could bring everything to the basement.

8:15 am:  Tito arrived and began setting up his little camera which would snap a picture every 20 seconds for the next 6 hours.  As people came and went throughout the day, I kept one eye on the legs of the tripod.  If someone knocked it out of position, the video would have been useless. 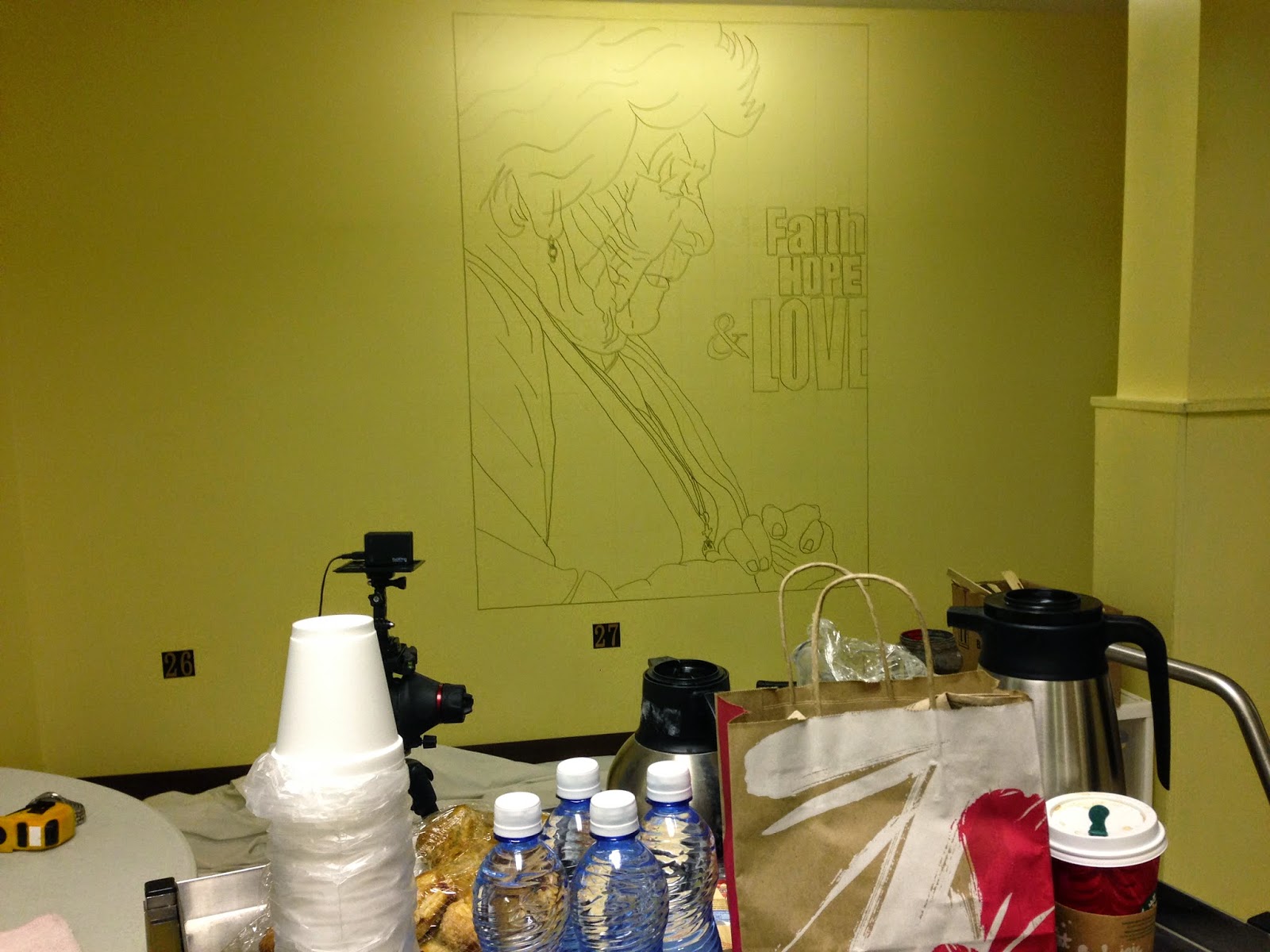 8:15 am - 10:30 am:  I created a grid in the centre of the wall that would host Elsie's mural, just above mat space #27 and #28 in a section of the room reserved for female patrons.  The careful measuring then transposing the face and the text of the message took longer than anticipated.  Getting the drawing right was essential to the success of the project.

8:45 am:  Diane Shannon, Executive Director of the United Way arrived with coffee.  Bless her heart. 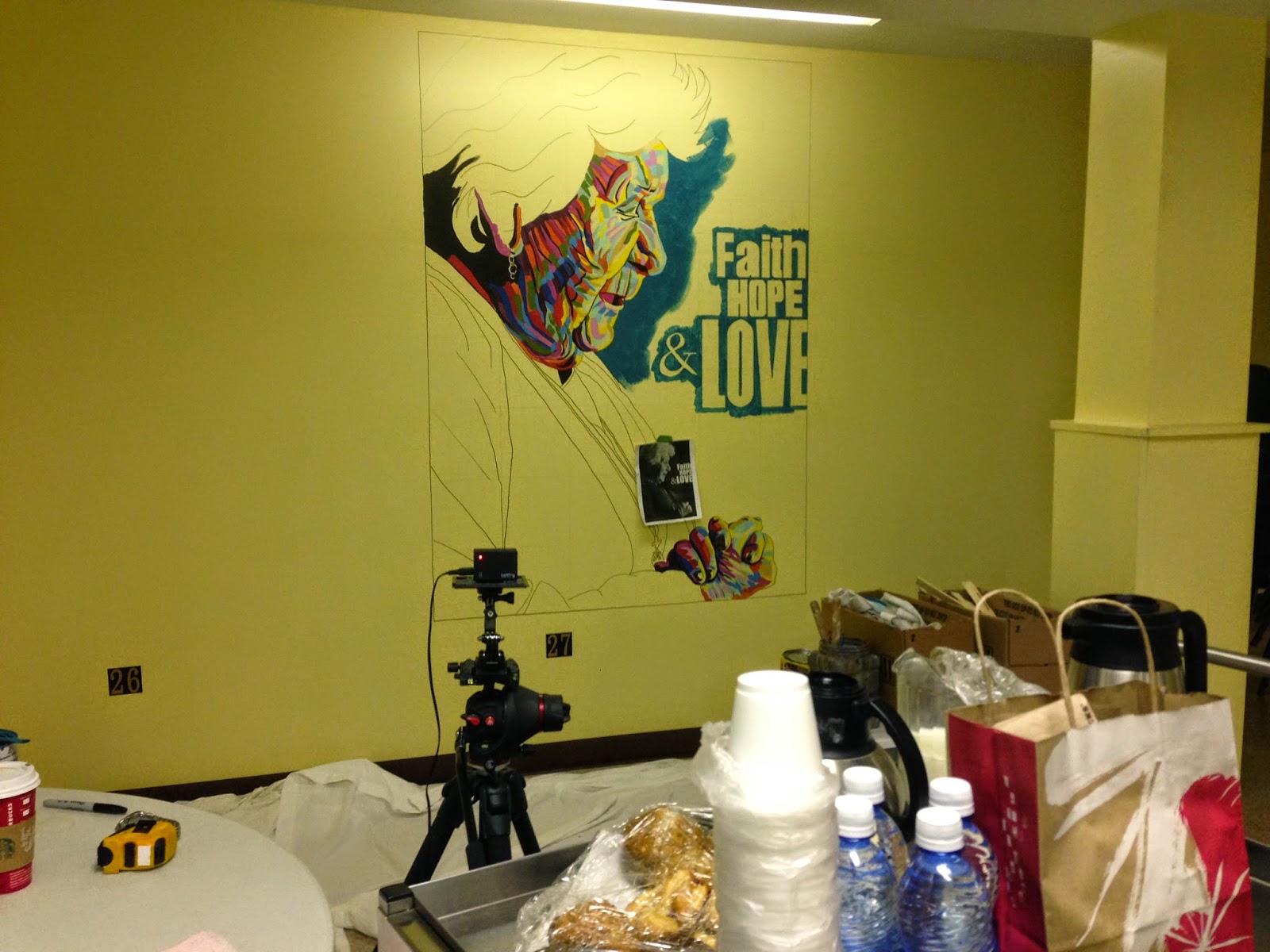 12:15 pm:  Diane brought a burger and fries, which I gobbled down in 5 minutes, then continued painting, half my brain concerned that I wasn't going to get done in time. The clock was ticking way too quickly. 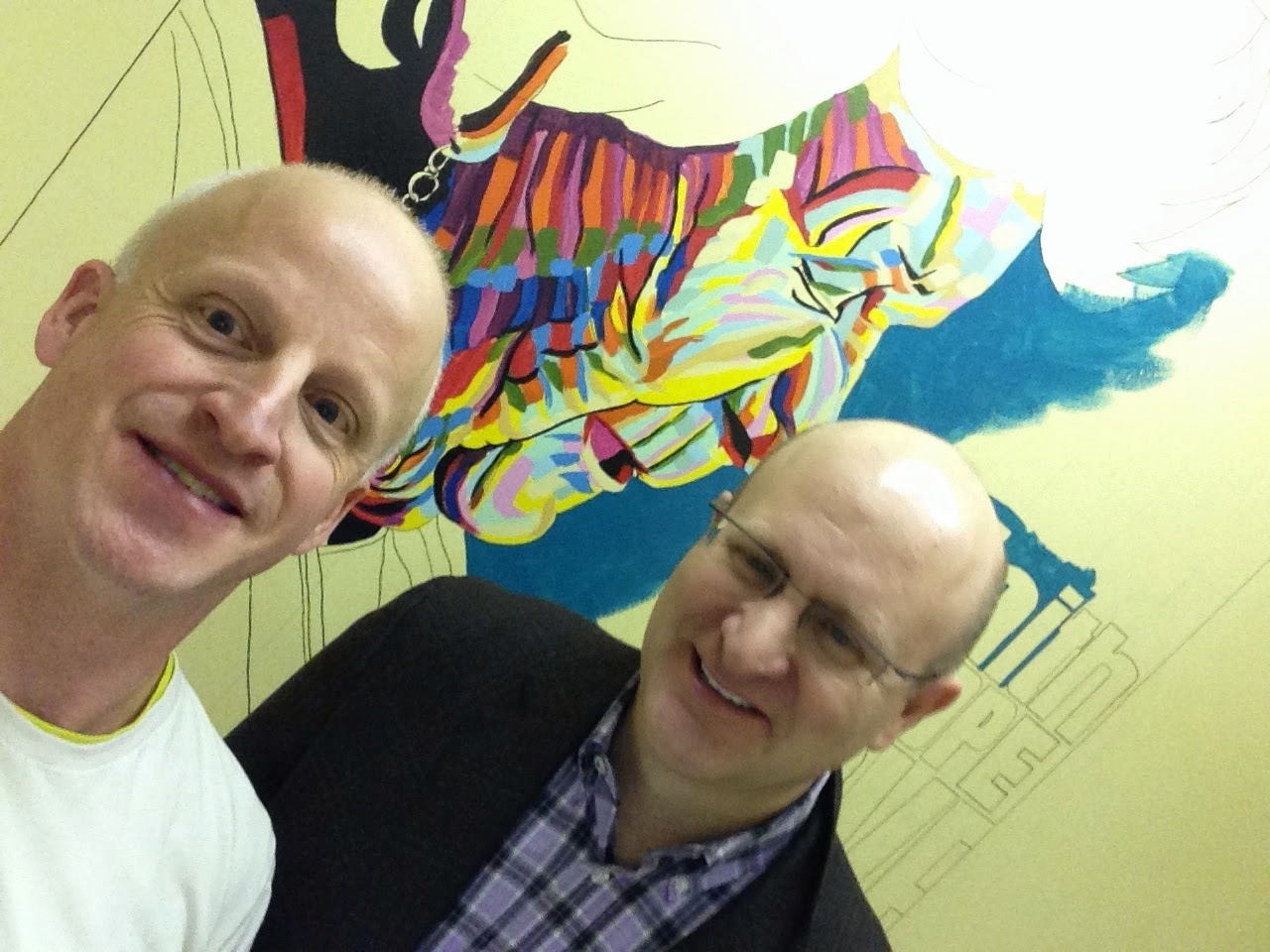 12:55 pm:  Minister Don Scott dropped in for a quick visit.  Don and I served together on Council for a number of years and have grown to be good friends.  Coincidentally, we also get mistaken for one another on not infrequent basis.  Someone had recently approached him, commending him on his performance of Scrooge in A Christmas Carol.  He didn't have the heart to stop the person as they started asking about where he was trained as an actor. 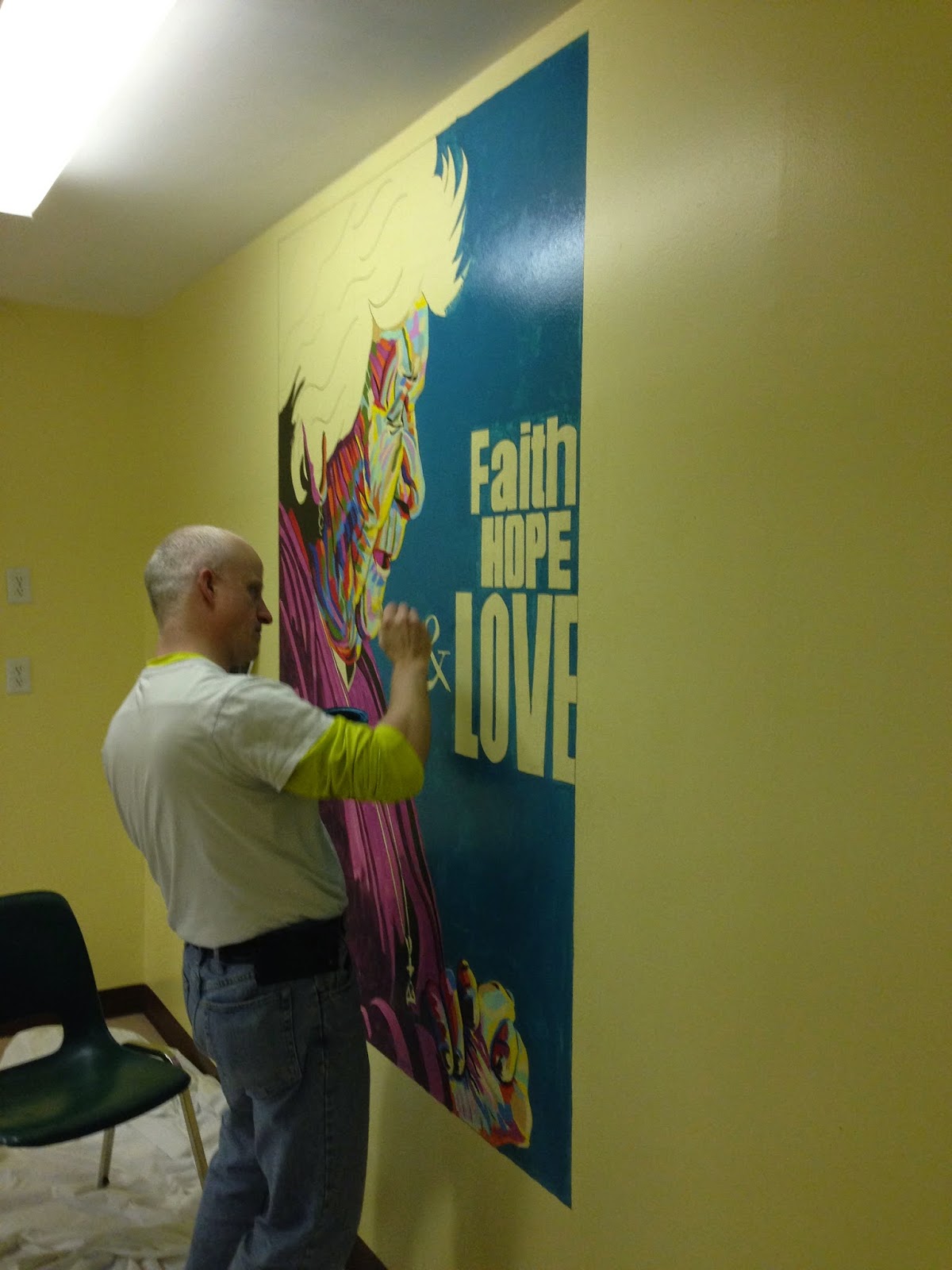 1:30 pm:  As I worked on completing the first coat of the blue background, I began getting a little anxious that time was waning fast and that there was still much left undone, primarily the clothing and the hair.  Around this time, I sent Diane a text asking if she could swing by Elsie's place to pick up her binders of prayers.  They would be essential to the final phase of the project.

2:30 pm:  I finished the first swath through the purple outfit and began putting a second coat on the blue background, well aware that colleagues from the United Way and the Salvation Army would be arriving in the next half hour. 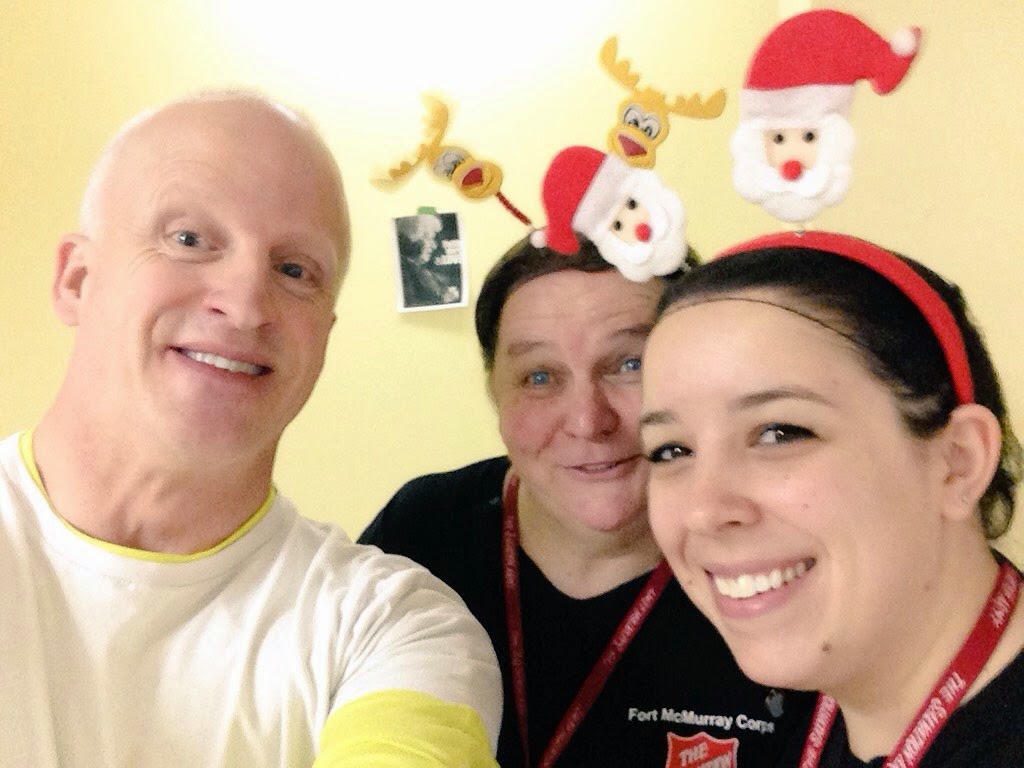 2:45 pm: Major Stephen Hibbs arrived as did a number of other Salvation Army staffers, including "Trouble" and "Troublette" - they had popped in for a quick hello (and triple selfie) earlier in the day.

3:00 pm:  I continued working on Elsie's hair as everyone strolled in and began looking through Elsie's binders of prayers for words that would resonate with them.  The exercise was simple:  each person was to add prayers or messages of love in the blue background of the mural.

"Please feel free to write something in your own language," I suggested.  Several people took me up on that.  There are messages from Zambia, Eritrea, and Pakistan, just to name a few. 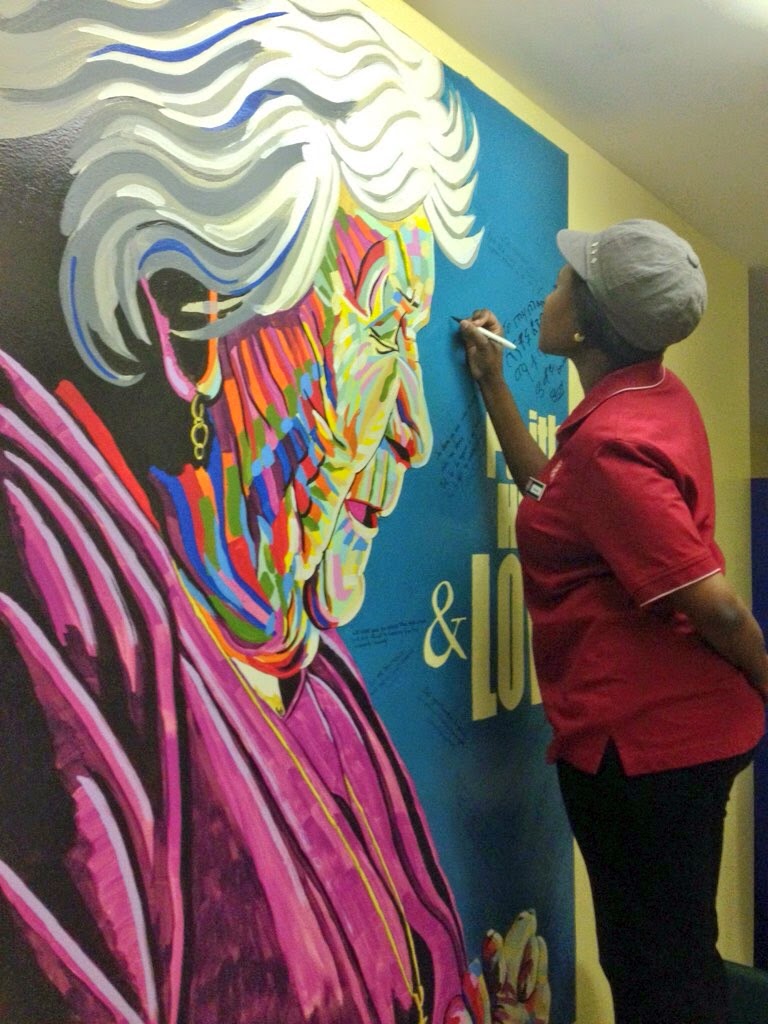 4:00 pm:  Diane Shannon asked me to pause my painting as she wanted to say a few words to the 20 or so people who had gather and contributed to the piece.  Through tears, she shared a story of how her grandfather had helped her and her family out during a Christmas when they had very little.  Times were downright tough, and Grandpa sent a letter and a cheque.  In the letter, which Diane recently reread for the first time in 20 years, he told her to never forget the Salvation Army during the holidays.  The fact that we were in the Salvation Army doing this project created a lot of emotion.

"We have a box of things for your guests on Christmas morning," she said, indicating a collection of healthy treats, gloves and other essentials.

Joan Nobles, the General Manager of the Community Centre, presented me with a wonderful certificate of appreciation, as I did my best to hold it together.

"Absolutely," I replied, slipping on a microphone.

4:27 pm:  I quickly packed everything up, and begin crating it up the stairs and into the back of the Escape.  There was a long line-up of guests ready to come in for the night.

4:30 pm:  "Thank you," I said to the security guard, as I made my final trip up and down the stairs and the patrons were let in for their evening meal. 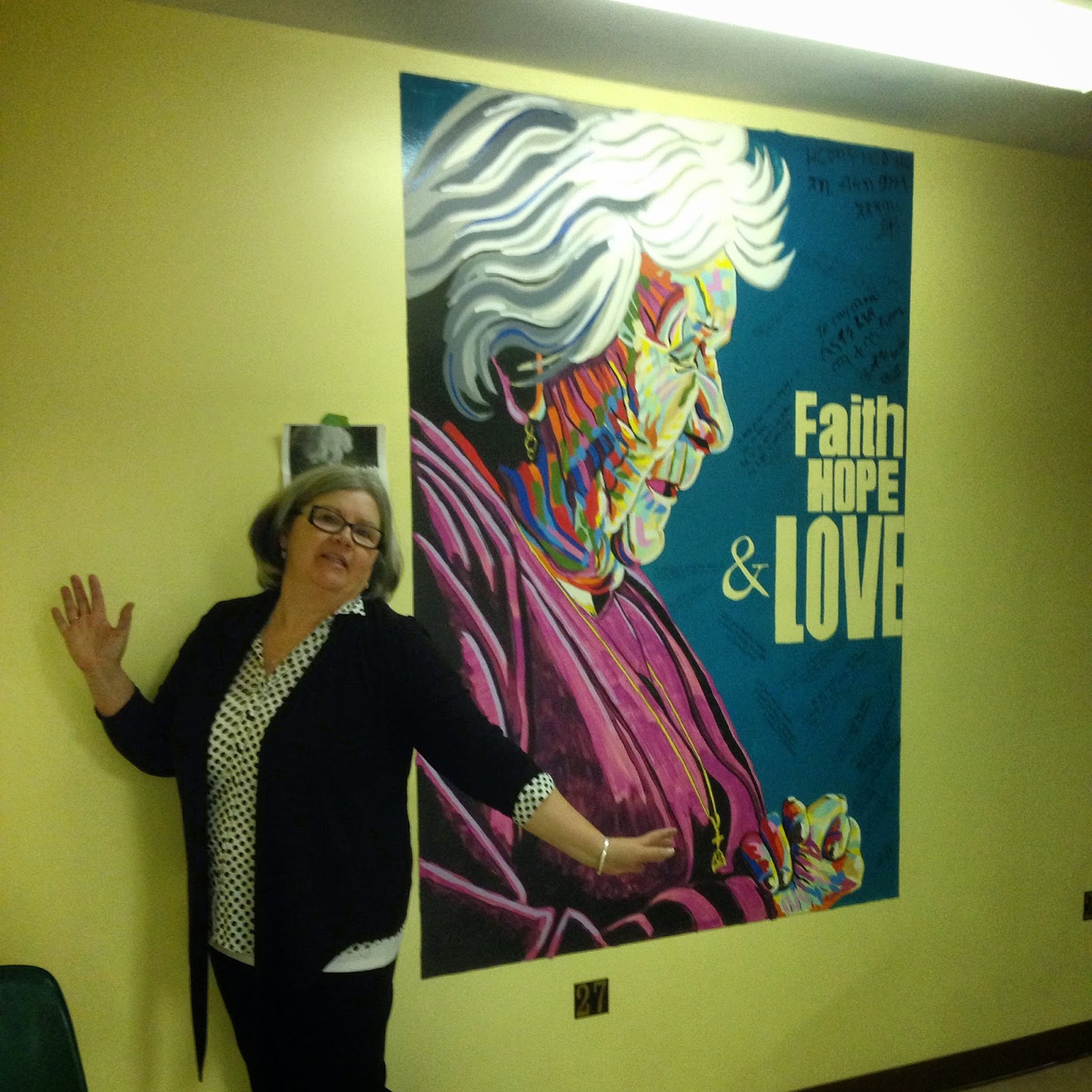 Yesterday was amazing on so many levels.  It will be a day of painting that I will never forget.  I'm grateful to Kate Penney for keeping me company and for putting together a beautiful display about Elsie, so that the patrons and staff could better understand the context of why the mural was painted. 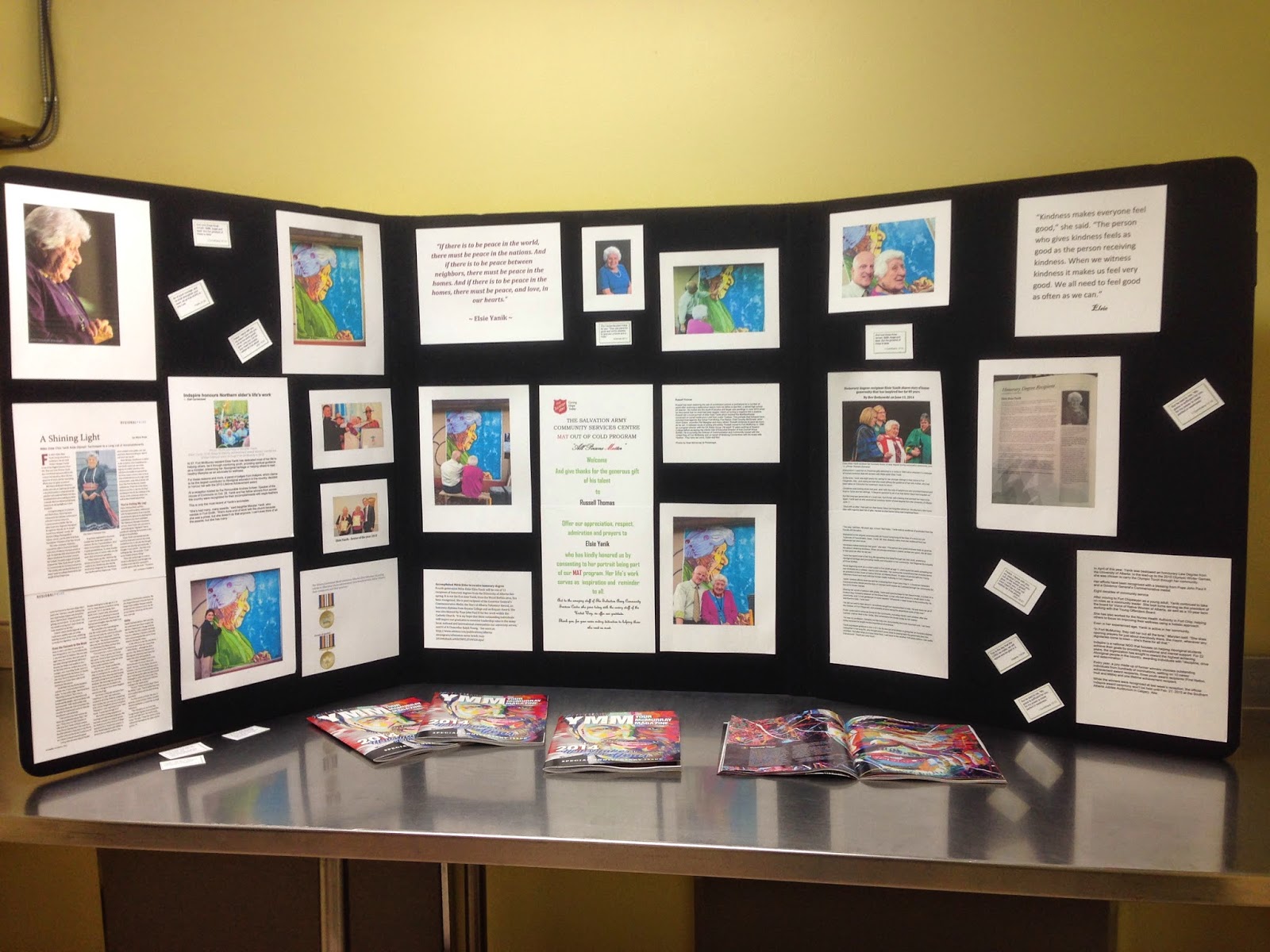 "A lot of those people know me," said Elsie, as Heather and I visited her after dinner.  She wished that she could have come down to see the finished project, but her vision is not the best at the moment.

"Elsie," I began.  "Kate Penney from the Salvation Army shared with me that meeting you is on her bucket list." 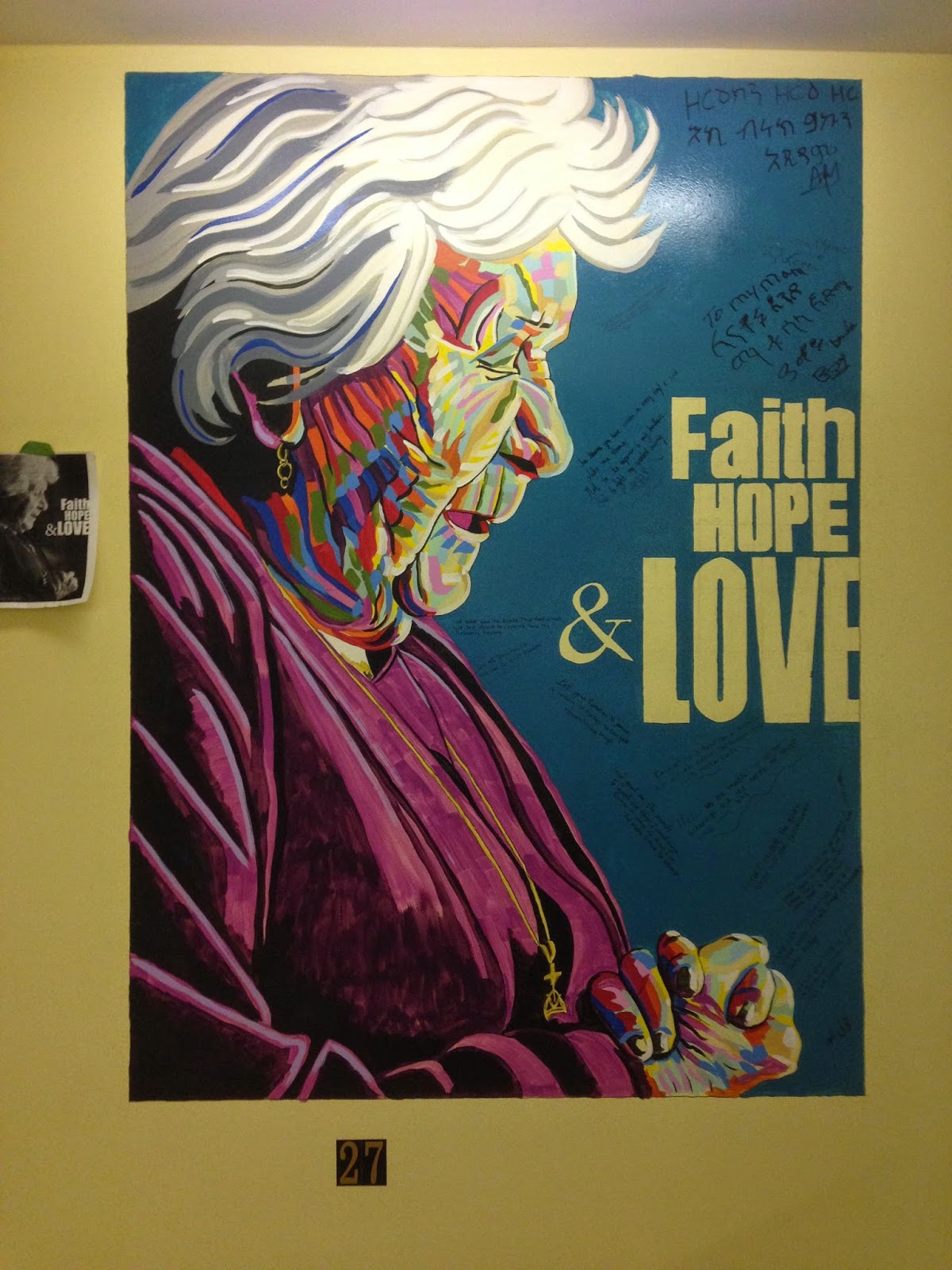 My deepest gratitude goes to my colleagues and friends at The United Way of Fort McMurray and the Salvation Army for adding your spirit, prayers and words of love to the mural, and for supporting the vision of the project.  I am also thankful for Tito, for capturing the project on film and producing a beautiful retrospective time-lapse piece.