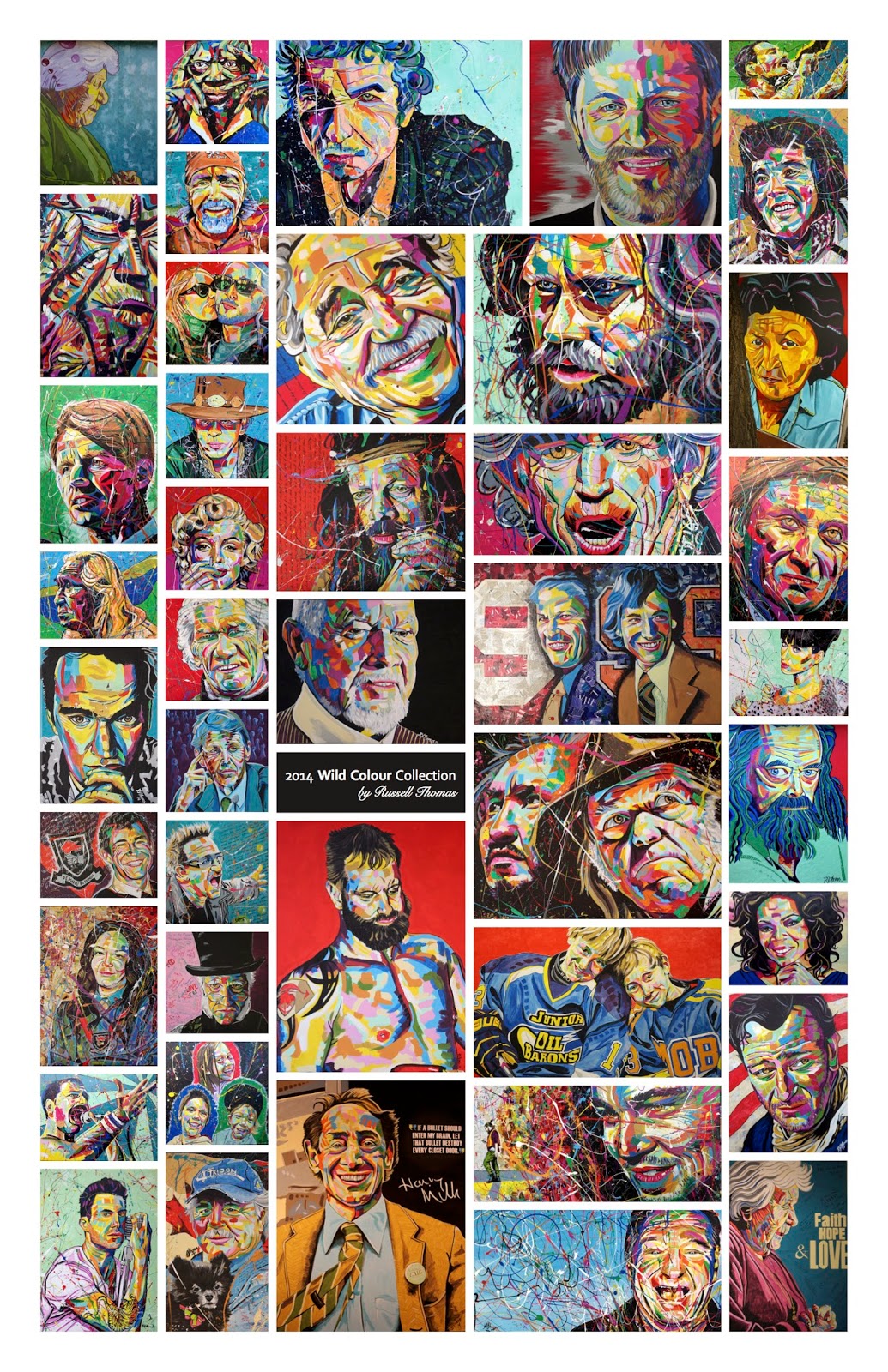 Could I ever have guessed that 2014 would result in the wild colour collection that has been growing with each passing week since I began in June?  Never in a million years.  I'm trying to pinpoint the catalyst, the point when there was no turning back. 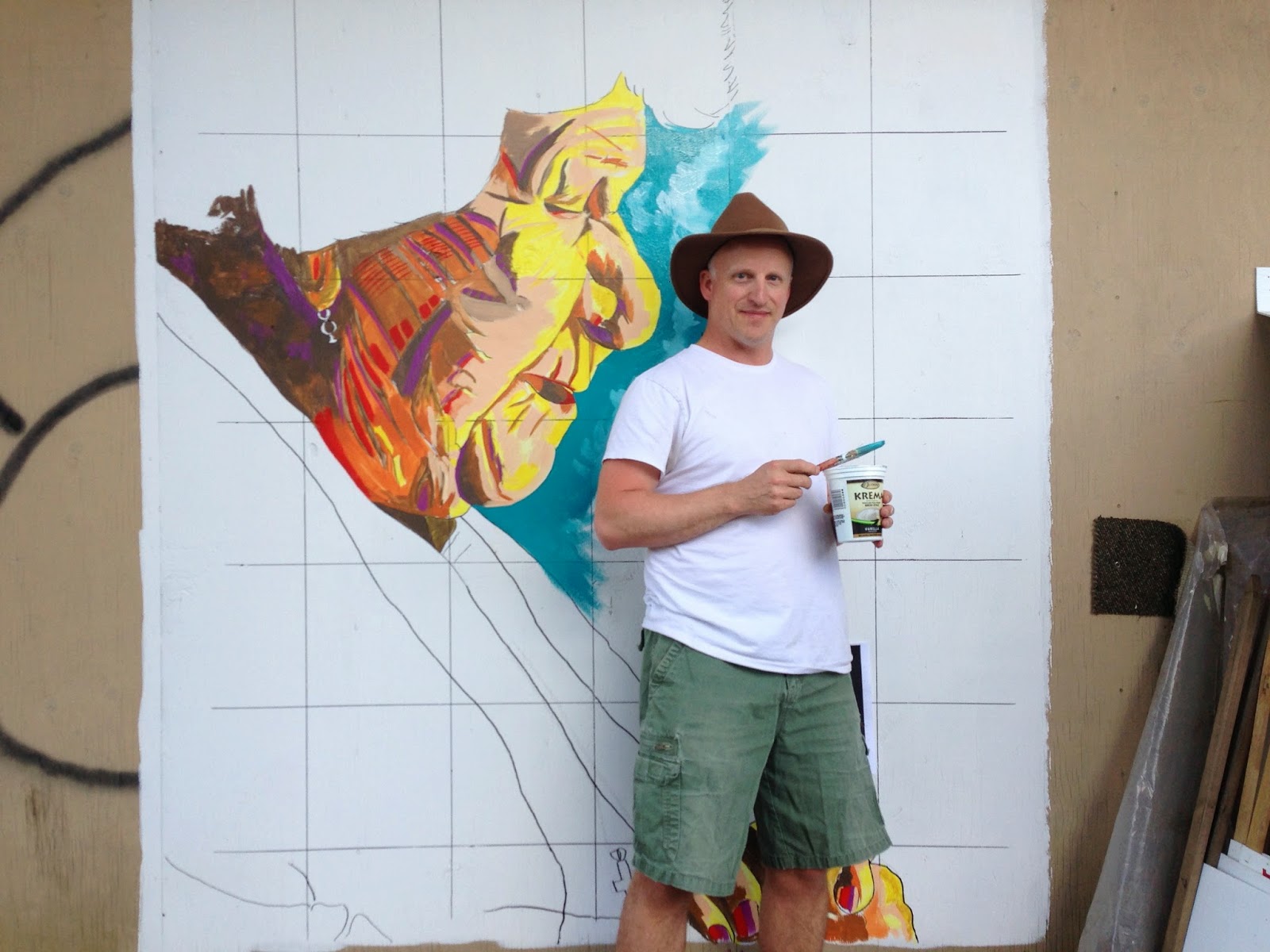 After painting Elsie Yanik I felt the need to continue.  So, I painted former Fort McKay Chief Dorothy McDonald on the other side of the shed.  I got into a pattern during those days, of interspersing painting with yard work, diligently cleaning up the area around the murals.  It felt good paying attention to this bird-filled paradise tucked in the back alley between Demers and Hill Drives. 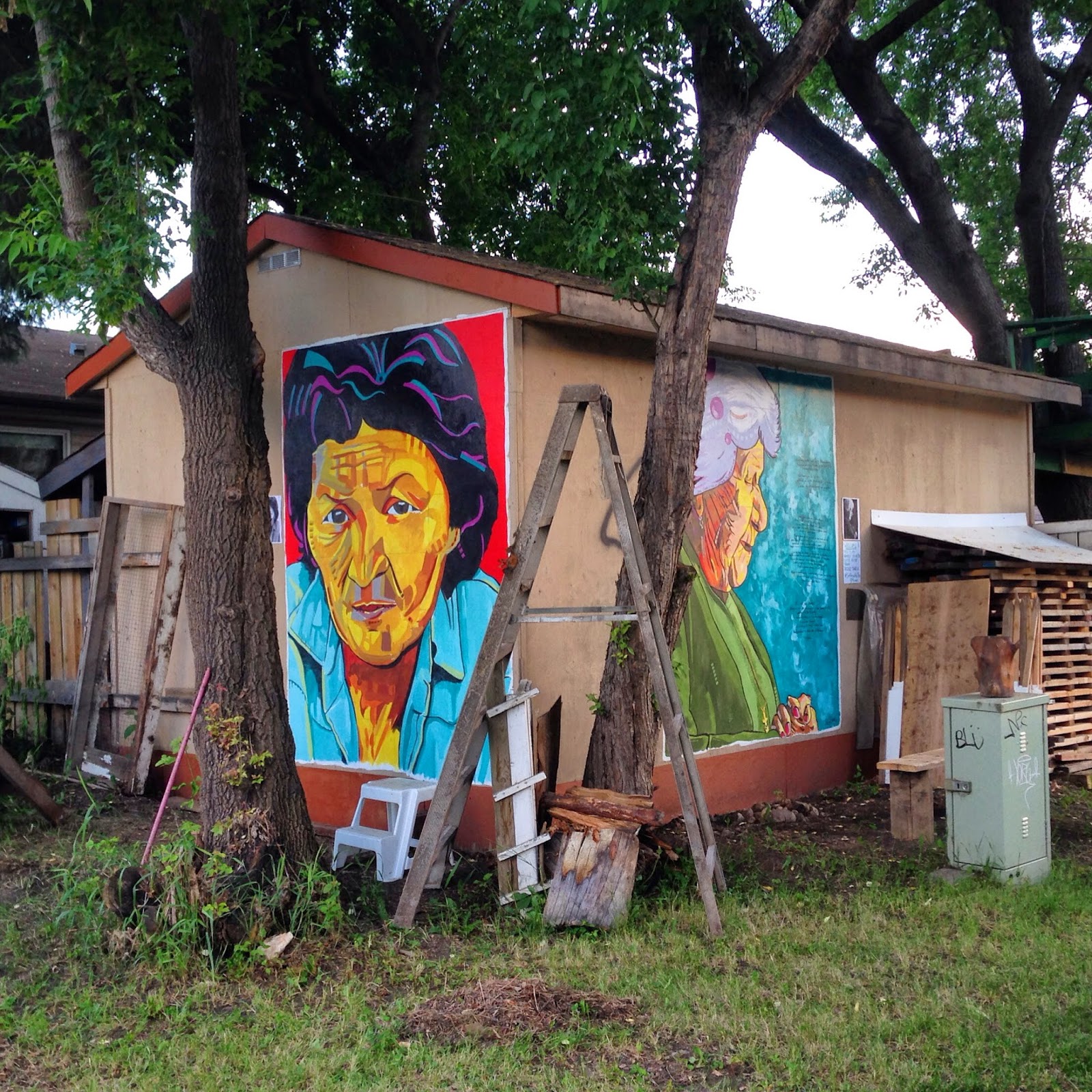 Not satiated yet, I grabbed a piece of pine that I had laying around the shop and revisited Miles Davis, a subject I had painted in the late 1990's. 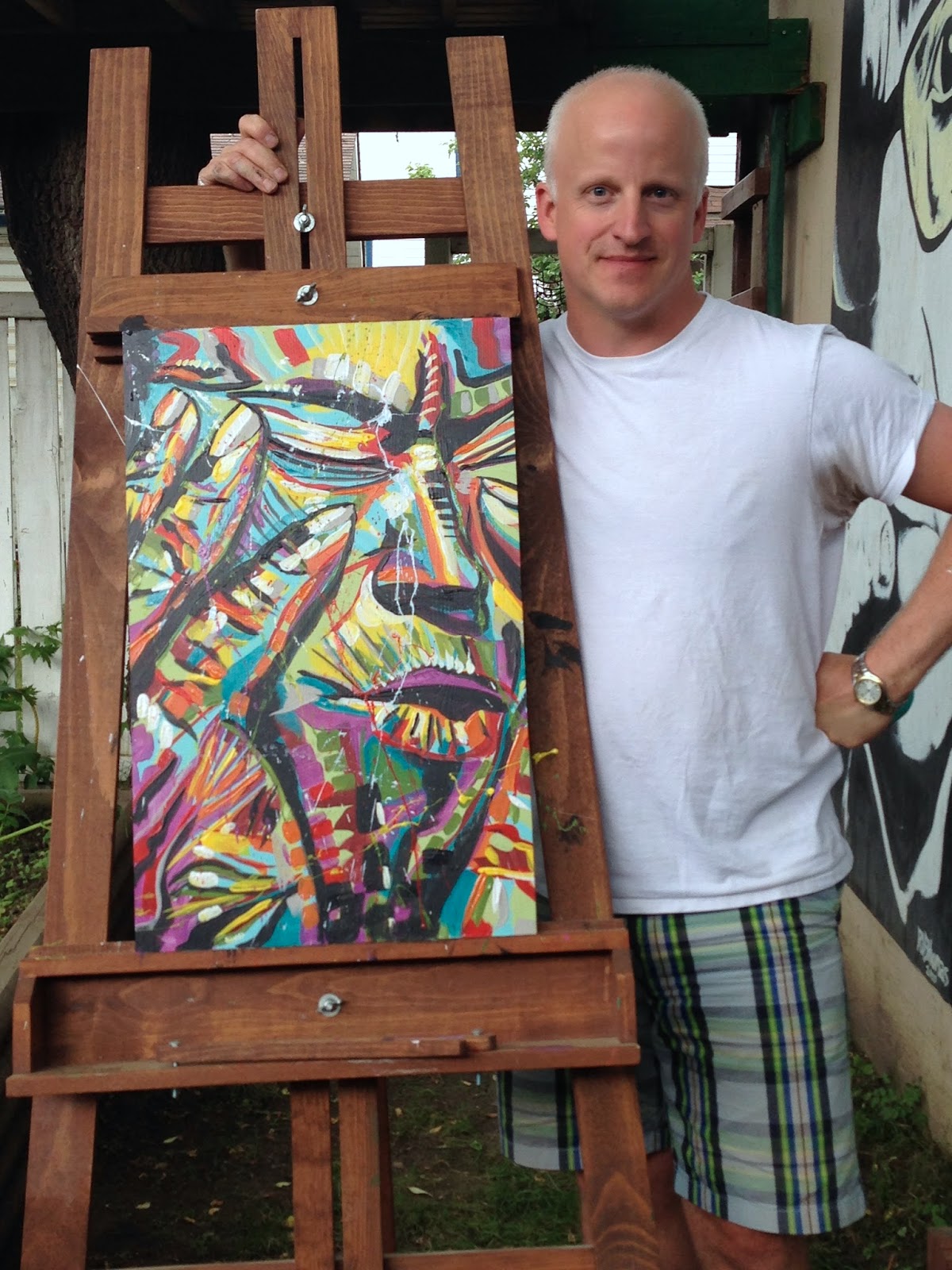 It proved to be great fun playing with the myriad colours I had gathered for the Elsie and Dorothy murals. 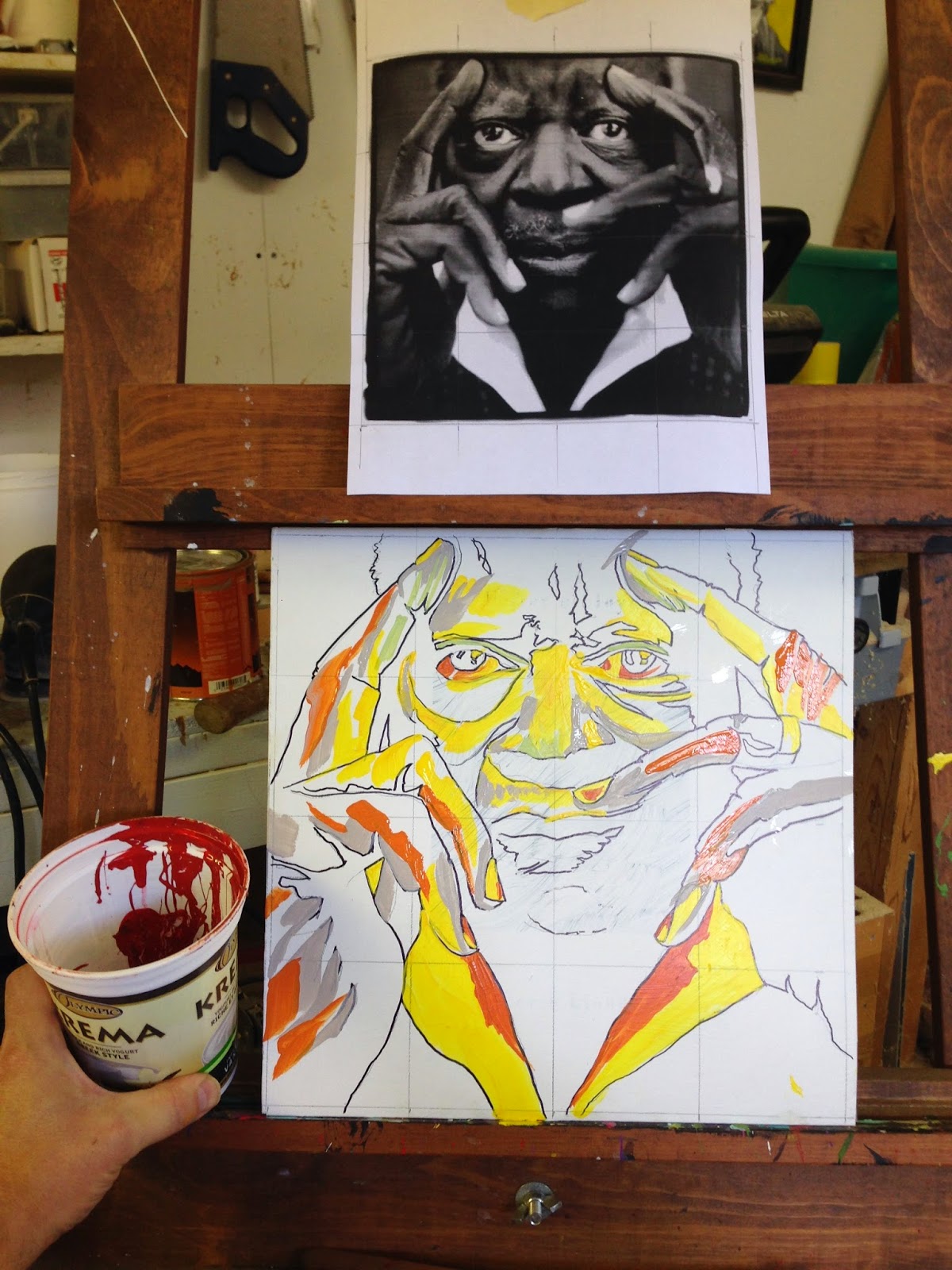 Oscar Peterson was next, painted on an old album cover.  It was important, because it was the first one that I decided to sell.  A number of offers came in from a Facebook post, including the high bid from Jason, a former radio colleague, now living in Michigan.  I was shocked and delighted that something I had painted sold.

I really need to thank Jason as he inadvertently helped me climb over a mountain that has lead to a fertile plain where I have discovered a market for me style of portraiture.

Taken together, the paintings that followed in the next seven months would completely cover a wall 8-feet high and 50-feet long.  Over and above the volume, there are many amazing memories, highlights of a journey that still feels like it's just beginning.

Many of the very personal works were done in a clandestine way, requests from people who wanted to honour someone special in their lives.  Seeing Norm Sutton's eyes mist over when he saw the mural that Sheila commissioned was a moment I'll never forget.  The delight on the face of Darlene Zacharias as she led her unknowing son Adam to my studio to get his Freddie Mercury portrait was priceless.  And the reactions of local politicians like Kyle Harrietha, Guy Boutilier and Phil Meagher to their surprise portraits were very cool.

Watching Blake Crossley's response when opening up his portrait of Bono on Christmas morning was one of the most delightful things I've ever seen.  Seeing the note from director Jacqueline Russell on closing night of A Christmas Carol, that we had made her bawl with the Scrooge self-portrait, provided a perfect end to an unforgettable production.

I had no sense that painting Robin Williams on the day of his death would spark a public dialogue about mental illness, but it did.  It also went on to raise $2,500 for Some Other Solutions and their Stand Up For Mental Health Program.  The Bruno portrait lit up kitchen table conversations in East-Central Saskatchewan as people remembered a character who chose to live a very simple (and homeless) life and died completely alone.

The Leonardo DiCaprio piece, Fly-In, Fly-Out, got people talking about the impact of celebrity visits as did the duo-portrait of Neil Young and Chief Allan Adam.

Adding to the Collection

It was a lot of fun to paint for the world's biggest collector of Wayne Gretzky memorabilia, Shawn Chaulk.  The painting of Gretzky with Mr. Hockey (Gordie Howe) went to a collector from the west coast.  The portrait of Elvis Presley is the centrepiece of a great collection owned by an old friend of mine from Saskatoon.

There is additional pressure when painting "real" people, as opposed to well-known celebrities.  However, the response of the friends and family more than makes up for any additional anxiety it creates.  I have been overwhelmed by the feedback from the portraits of the Hartigan and Chaulk kids. Norm Foster was kind enough to put the portrait I did of him on his website.  And seeing Kyle Harrietha's painting on the front cover of YMM magazine was amazing. 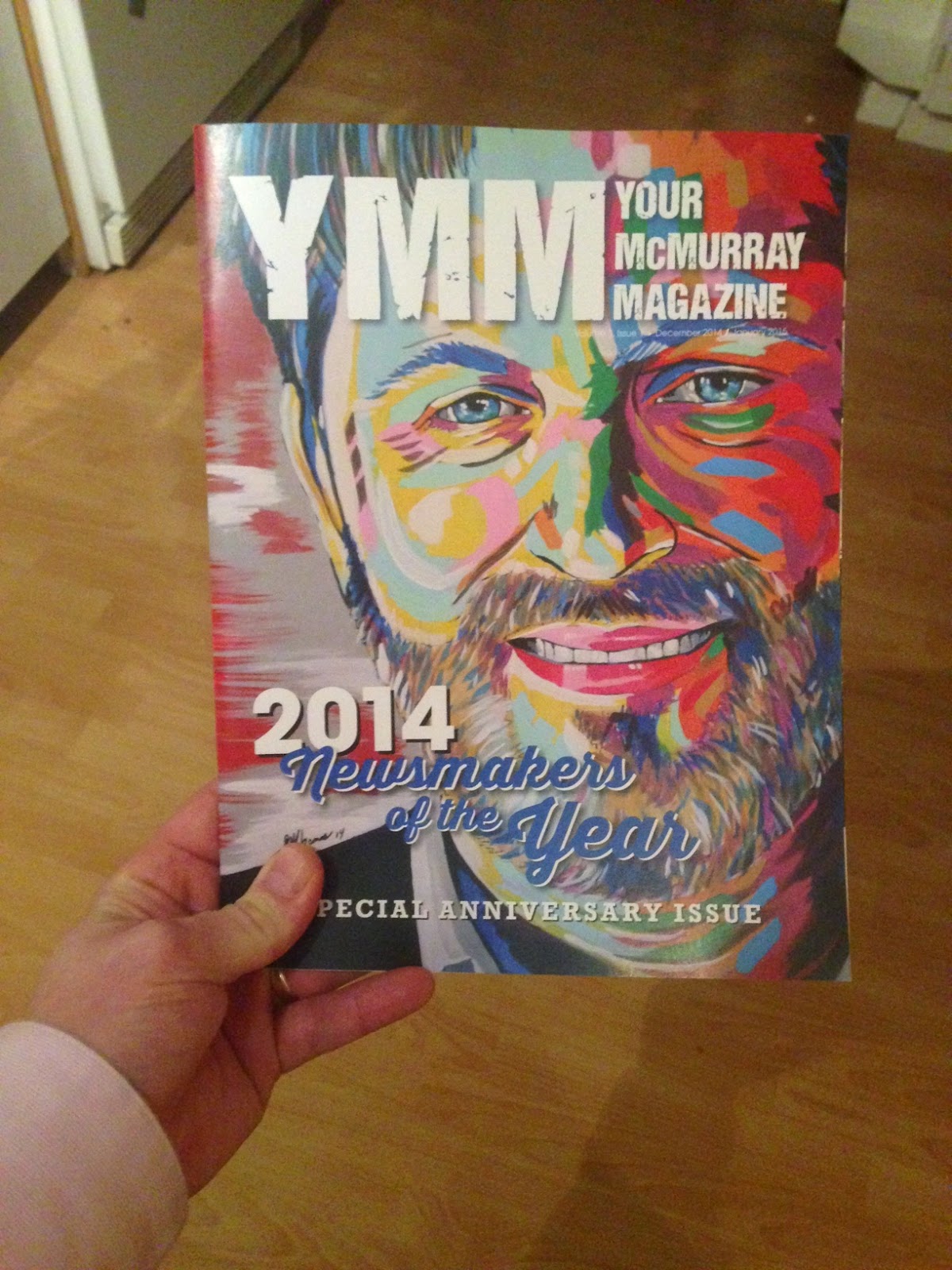 And most recently, the portrait of Sandy Bowman ranks up there with one of my personal favourites.  The fact that he liked it, too, was icing on the cake.

The wild colour style has evolved over the past seven months.  I'm splattering less than I was before and incorporating new colours and textures.  Some pieces utilize collage, others script.  I keep learning as I go along and am excited to see when I go in 2015.

I am deeply grateful to Elsie Yanik and Joey Podlubny.  Elsie was the subject of two mural projects, the most recent being in the Salvation Army Mat program.  Joey is the photographer who captured the inspiring pose of Elsie praying. 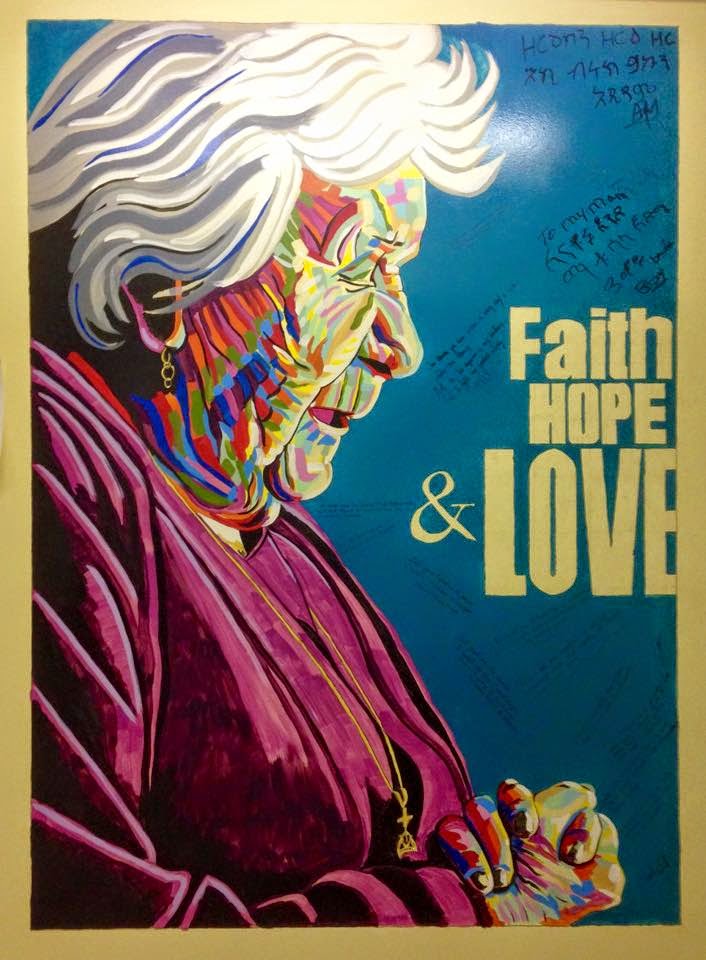 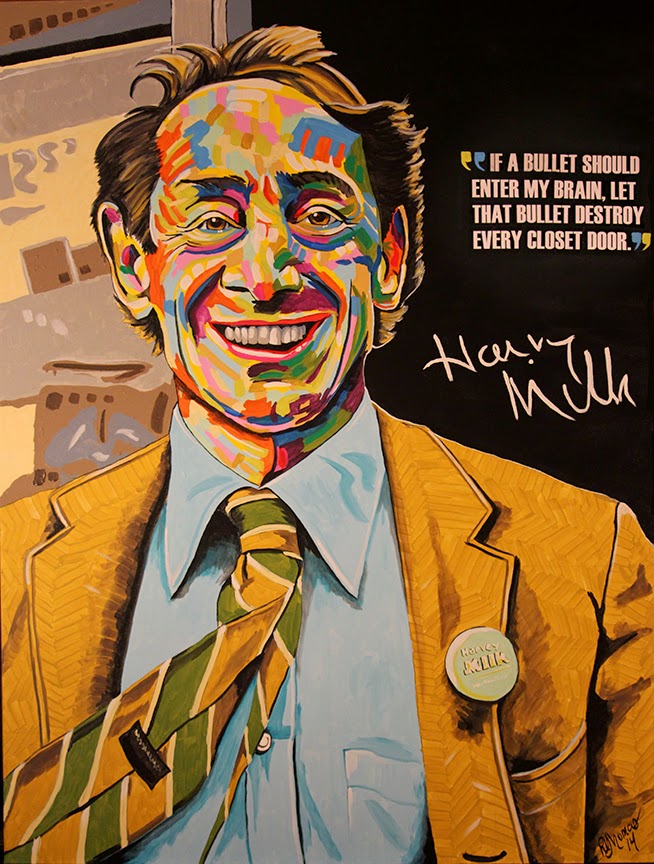 After finishing up Harvey Milk and seeing the joy in the face of Michael Jesso, its proud owner, I decided to close out the year by painting someone who embodies faith, hope, love and service to others.  Mother Theresa is the only piece that does not appear in the collected works poster.  It was the perfect way to end the most productive year of creating art that I have ever had. 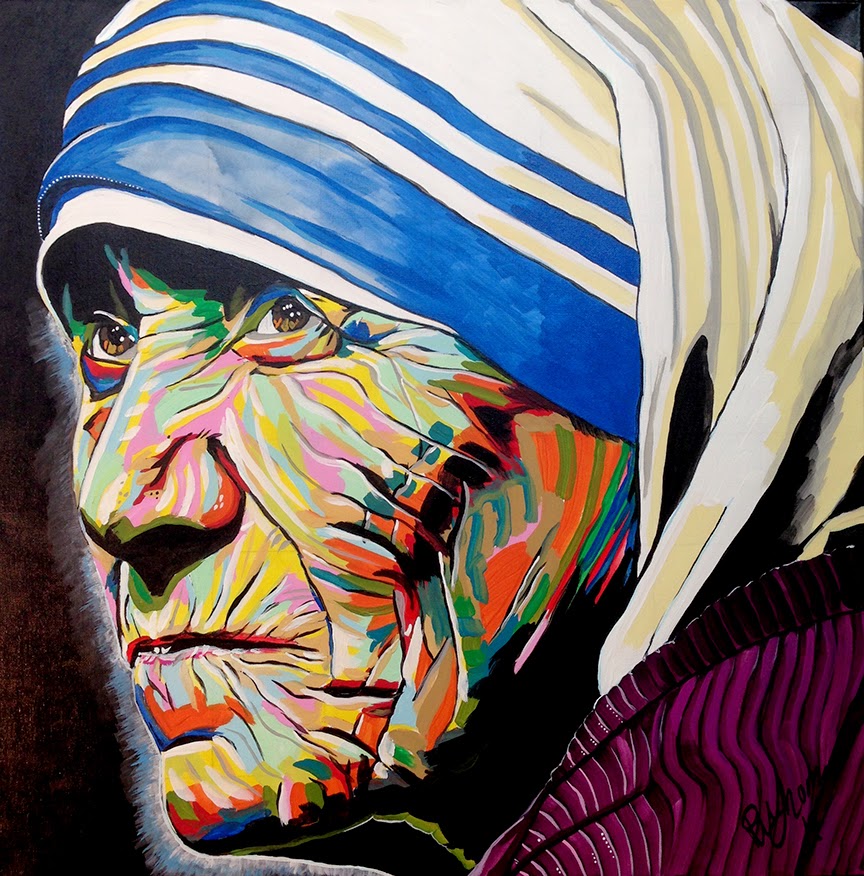 "I see Mom in her eyes," I said to my brother Greg, spending a couple of days visiting us from Saskatchewan.

"You are absolutely right."

Mom, Mémère, Mother Theresa, Elsie Yanik - that a whole lot of wisdom, grace, faith and love to bid a fond farewell to 2014 and give a big hearty welcome to 2015.