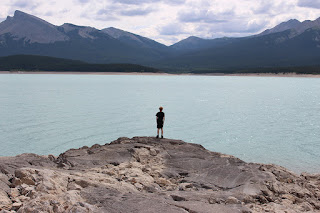 We are in the middle of our first father-son trip.  This morning, I am at a desk in our room in the EconoLodge in Hinton looking out at a misty but clear morning after a late night storm.  It's just Ben and I on this leg as we had dropped Dylan off at Artstrek in Red Deer on Sunday.

It has been a good opportunity to get to know both boys a little better.  Dylan co-piloted on the first part of the journey and spent the entire trip engaged in conversation about life, theatre, and myriad other things.  When we have travelled in the past, it has normally been all four of us, Heather and I in the front, Dylan and Ben in the back, both noses deep in whatever device they were playing on or listening from. 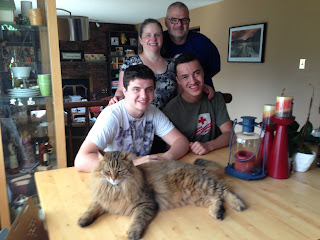 Dylan loves to talk and listen.  He is thoughtful and insightful, with a bucketful of life experience to add richness to his perspectives and the conversation.  There was no question that he was vibrating with anticipation about getting to Artstrek, where he will be among 100-plus young people who love theatre and embrace human connection.  He is a dyed in the wool extrovert, and Artstrek is his Nirvana.

Ben on the other hand is more reflective and quiet.  With strangers, he can appear rather distant and suspicious, possibly even aloof.  He is a deep-feeling person, highly creative, and longing for connection, though in a different flavour than Dylan.  At 12 years of age, he still gives me spontaneous hugs from time to time, without saying a word.  No words are needed.

Ben has been in the co-pilot seat since we dropped Dylan off in Red Deer.  We've spent many hours on the highway travelling to Sylvan Lake to Jasper and on to Hinton.  There is a lot less talking that happens with Ben, but he is engaged all the same. 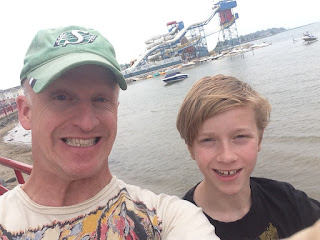 I was quite concerned about Ben's breathing on the first portion of the trip, when the smoke was still lingering in the air from the many forest fires burning in Western Canada.  He was definitely not himself, struggling to get a good supply of oxygen, particularly on the day we landed in Sylvan Lake.  We went for a walk along the beach and by the time we got back he was really struggling to get enough oxygen; his pallor was showing it.  Somehow, the combination of the heat and the air quality was having an adverse effect on his ability to function.  His stamina and strength were much improved as the evening cooled and the wind shifted, clearing the air. 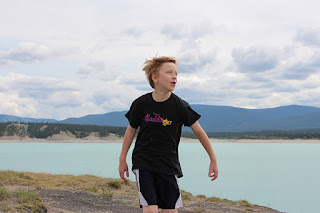 We stopped a couple of hours before Jasper to explore a beautiful stretch of rock along the North Saskatchewan River.  The air was so clear and fresh, the temperature was moderate, and a refreshing wind was blowing.  It filled me with relief to see Ben back to his old self bounding from rock to rock, filling his body with good clean air.

The drive from Sylan Lake to Jasper seemed never ending, but we finally arrived and walked around the community.  I have to be honest and share that I really don't relish tourist-centric places like Jasper, teeming with people and littered with one gift shop after another.  We did the walking tour, grabbed some food, then happily headed out of town. 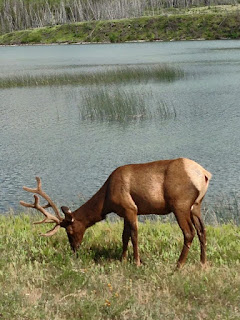 Shortly after seeing a beautiful elk, we ran into a family of big horn sheep hanging out on the highway.  All the vehicles stopped to admire the slow moving lambs as they meandered across the road to rejoin the adults on the other side.  It was a lovely moment, and worth the four hours of driving to experience it.

This trip is less about "doing" and more about "being", together, on our own.  We have effortlessly found moments of laughter and wonder, watched TV shows together in a way that never happens at home, and grown closer.

Heather, in her infinite wisdom, has encouraged this kind of trip for quite some time.  She has done several with both boys.  All I can say is bless her for suggesting it, and thank you to Dylan and Ben for coming along.  It has been a gift to me.
Email Post