Theatrical jewel to get makeover 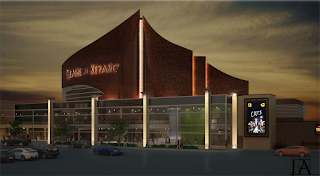 In January of 1996, I came to Fort McMurray for a job interview at the local radio stations.  As part of that hiring process, Kelly Boyd - the manager of CJOK and KYX98 at the time - took me on a tour of the community including a stop at Keyano Theatre.  When I walked into that facility for the first time, it took my breath away and helped solidify my decision to accept the job offer and move my life to this community.

Keyano Theatre is pretty much the same as I found it almost two decades ago, save for new seats that were installed about 10 or 12 years ago.  Last night, municipal council voted to invest $10 million dollars on an expansion plan that includes a balcony, over 600 new seats, an art gallery and a brand new lobby area.  I'm grateful to the leadership at Keyano College for pursuing this vision.

Keyano Theatre has played an integral role in my life and in the life of my family.  I was an employee there from 1999 to 2006, serving as publicist. I have volunteered there in multiple productions, usually (but not always) in a performance role.  We have been season subscribers for more years than I can remember and we have been Theatre Angels as long as the annual giving program as been in place.

Here are just a few of the memories that pop to my mind that happened in this hallowed artistic space.

The first time I engaged with Keyano Theatre in a formal sense was at an open house during the run of It Runs in the Family.  Alan Roberts was the tour host and took us on a guided tour of the set for that incredibly funny show.  It wasn't long after that I began helping out Colin Page behind the scenes with the construction of the set for Crazy For You, the musical in the on-deck circle.

I was at a radio station staff Christmas party when I got the call that I had been cast as Tom Joad in The Grapes of Wrath, a stage adaptation of the John Steinbeck novel.  I remember letting out a great big whoop in the middle of festivities.

Dylan entered the scene in the middle of the run of The Taming of the Shrew.  It was the Saturday night performance of opening week and his mother Nadia was in the audience.  He wasn't due until April, but he decided to get an early start on life in mid-February.  I finished the performance, found out she was in labour, and rushed to the hospital.  He was born two days later.

My Achilles tendon snapped on the closing night of Death of a Salesman in 2000, somewhere in act one.  I had been under considerable personal stress during the run of that show, and my body insisted that I slow things down a bit.  I finished the performance, hobbling from one piece of furniture to the other, not knowing exactly what had happened.  I had surgery in Edmonton two days later and spent the next many months as a one-legged single father.

I've seen a lot of artists come through the art gallery located in the lower lobby of Keyano Theatre, but the one that jumps out the most is Peter van Tiesenhausen.  He did an incredible installation in the gallery that included wires hanging from the ceiling.  At first, it seemed like a jumbled mess, until you stood in one particular spot and the face of Jesus appeared.

Long before Shell Place was a glimmer in some politician's dream, concerts were largely held in Keyano Theatre.  The list of artists who have performed there is impressive as are many of the memories those countless performances generated.  Paul Brandt's "Small Town Big Dreams" video was recorded there live, over two nights.  Classical guitarist Liona Boyd credited Keyano Theatre as being one of the nicest venues she has ever played, on The Tonight Show with Johnny Carson, no less.  More recently, Cory Hart recorded a number of different songs live off the floor (on the stage - no audience in the house) including a rendition of a new version of "Sunglasses at Night".

It doesn't get any sweeter than to go through a production process with my sons.  Dylan joined us behind the scenes for the first time in Hometown...The Musical!,  and operated the follow spot.  He and Ben joined me on stage for Les Mis the following year.  Most recently, Ben played the Ghost of Christmas Past to my Ebenezer Scrooge in A Christmas Carol.  Both boys have been bitten by the theatrical bug, and Keyano Theatre has become as equally important to them as it is to me.

With the approval of the $10 million, the reality of a revitalized Keyano Theatre seems closer to coming true.  I'm not sure about the timelines, or about the plans to keep activities going during the constructions phase.  However, when the dust settles on this project, we will be left with a community and cultural jewel that will shine for decades to come.