It's easy, but it's not easy

There is a point in time with most of my painting projects, usually within the first hour of painting, when I experience a moment of uncertainty that I'm heading in the wrong direction. Each time I have to encourage myself to trust the process and muscle through the tough part.

I keep adding colours, giving the face its form, until a point when it is time to bring in black.  There are features that always require dark tones, no matter the subject: the eyes, nostrils, mouth, and parts of the ear.  When those areas have been lightly painted with black, the subject generally starts to emerge from the canvas.

During the part of the process before things come together, I often flashback to working on projects when I was younger, reaching a similar point and giving up.  I have trusted the process over 100 times in the last year, and I have not given up once.

Each commission presents its own set of challenges.  I recently did one of Jimmy K, apparently one of the key founders of Narcotics Anonymous.  I say "apparently" only because he dismissed any credit or attention, choosing to remain in the shadows.  There are only a few photos available of this guy, one of which I used to paint his portrait for a client. 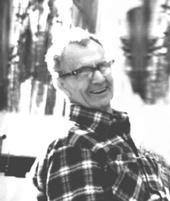 The black and white image was so tiny (15 kb), that by the time I blew it up to letter size, I was dealing with individual pixels.  In other words, I had minimal details to go by.  This was the second project of this nature and I embraced it as a learning opportunity.

Often, the biggest challenge of a portrait is not the subject, but the background.  In the case of Jimmy K, I had concurrent themes of freedom and surrender running through my mind as I was painting. The silhouette of the person raising his arms to the sky attempts to capture the elation of being released from the bonds of whatever has been gripping you.  I remember the feeling of surrendering to the fact that my first marriage was over and taking my first step in a fresh direction.  It was like a glorious new day, when hope supplanted dread and fear. 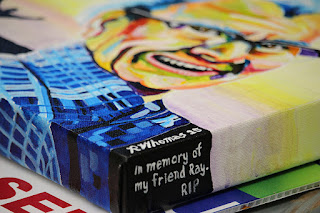 Ray kept going through my mind as I was painting Jimmy K.  He was a friend who was unable to surrender, and eventually died.  On the side of the canvas I've dedicated this piece to him, in hope that he has experienced a glorious new day in the great beyond. 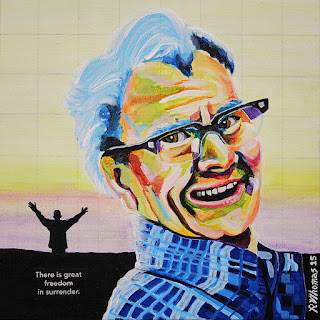 As I go through this journey, I look back on a body of work that is pretty remarkable.  But, I still feel that I'm only as good as the painting I'm working on in the moment.  I also know that I'm still learning, and will continue doing so until the day I die.
Email Post