I ran into Julio Florez at the North Star Ford Lincoln grand opening last weekend.  For a time, he had the largest private collection of my paintings.  That distinction now sits firmly in the laps of Marty and Dennine Giles at Ford.  Julio was one of early adopters of my unique portraiture style and greatly contributed to a remarkable year of doing requests and commissions. 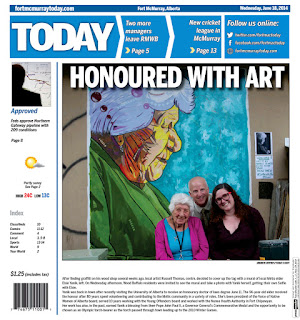 The mural that started this crazy painting ride was also the event that landed me in the media for the first time, as an artist.  My art story has since landed in a national newspaper, on television on Nova Scotia, and in a number of different publications locally and throughout Alberta. 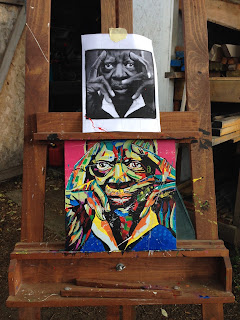 Jason Brown, a former radio business colleague living in Michigan, was my first customer.  He bought this crazy portrait of Oscar Peterson done on an old album cover. 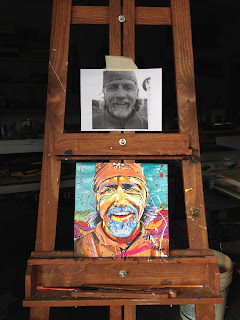 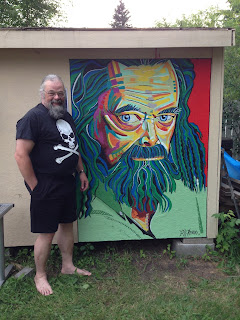 Doug Nicholls reached out and asked me to paint a portrait of our mutual friend Phil Meagher, to be given as a recognition gift last fall.  It was also painted on an old album cover - a Mini-Pops record if I'm not mistaken.  Sheila, our neighbour, asked me to paint a mural of her husband Norm on her shed while he was away on a holiday last summer. His reaction when seeing it is one of the awesome highlights of this crazy adventure. 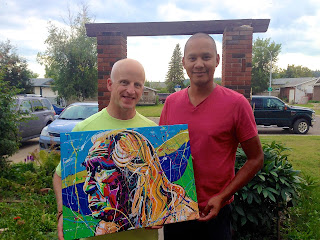 I've already mentioned Julio Florez as being the owner of a number of original paintings, but there are several others who own multiple pieces and have been great supporters and promoters of my work.  Thanks to Sandy Bowman, Shawn Chaulk and Kelsey Janvier for believing in me and being generous champions of the arts.  Thank you to Grant Berg, my friend from Grande Prairie, who saw the potential of the style to help brand his radio station.  Thanks to the client who just order four original pieces last night. 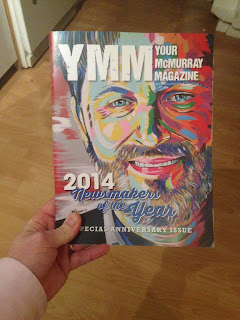 I was absolutely thrilled when YMM Magazine decided to use the portrait of Kyle Harrietha as the cover art for one of their issues.  I have since been able to do cover art for an album and a short film with other interesting projects yet to come. 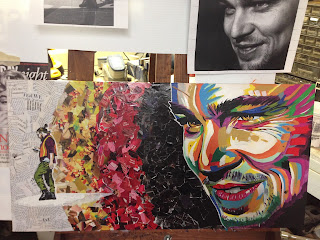 I have Robbie Picard and Kim Farwell to thank for asking me to do a number of different pieces to help with the message of understanding about our Region and oil sands industry.  Leonardo DiCaprio, Neil Young with Allan Adam, and Dr. Karl Clark all inspire dialogue and discussion about this place we call home. 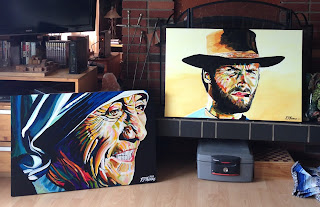 As I stare at the two latest paintings to come out of the studio, Clint Eastwood and Mother Teresa, I really begin to notice how the style has evolved and how much I've learned by just doing it a lot.  I had Malcolm Gladwell's thoughts (from Outliers) about 10,000 hours in my head as I promised myself at the end of last summer that I wouldn't let this painting thing go.  I committed to paint at least one portrait a week with the intention of strengthening my skills and developing an activity that I can do as a revenue generator in my retirement, a decade and a half down the road. I keep learning and evolving.  It'll be interested to see the kind of work I'll be doing 15 years from now.
Email Post