I will be heading to Mindcamp, Canada's creativity conference, for the fourth August in a row.  While Heather is currently enjoying an amazing personal retreat at the Esalen Institute in California, Mindcamp in Ontario will serve as my personal getaway.  While there is a core group of people who attend and present at this unique three-day creativity immersion, new people cycle in and out which always makes it seem fresh and unpredictable. 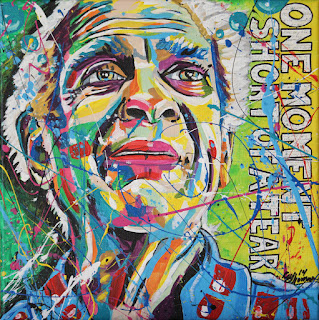 I'm excited to present a workshop this year called "Painting Steve Shama". The idea popped into my head during last year's Mindcamp and wouldn't let go.  What would happen if I brought 10 random people into a half-day session and led them through my portrait painting process using the same subject? 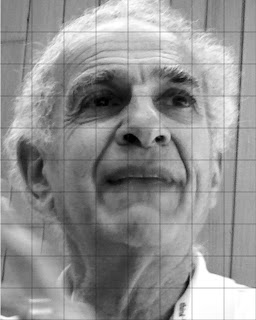 I'm still fussing over the exact structure, but essentially each person will start with a black and white reference photo and an empty canvas.  After three hours, we'll have 10 completely unique and beautiful portraits of one of the world's great souls: Steve Shama.

I wrote a blog post for the Mindcamp website last night, but I can essentially whittle down the essence of what has happened to me in the past year to four steps:

After a prolific summer of painting in 2014 I made a promise to myself that I would not let the craziness of the fall schedule supplant my painting.  I committed to doing at least one portrait a week.  With the goal of improving my skills and developing a viable activity to do in my retirement, I stuck to my guns, in fact producing on average two to three paintings a week.

I had used the grid system 15 years ago when I did big two tone murals of Woody Allen and Bill Clinton in my backyard.  I returned to it with the mural of Elsie Yanik last June and have been using it ever since.  It has changed, as has my style, but the system of doing a good sketch before starting to paint has worked exceptionally well.

I can't tell you how often I mutter these three words to myself.  While this is enormous fun, painting is hard work, especially when tackling a difficult subject or composition.  There are many times when my confidence gets shaken and stirred, when I have to dig deep down to muscle through the pain and trust that everything will work out.  It always does.

I get signals all the time, flashes of inspiration that I chose to embrace.  By way of example: I was watching Ken Burns's mini-series called Baseball when a photo of Ty Cobb took over the screen.  Every bone in my body said to paint him.  So, I did. That inexplicable calling led to a portrait that is going to make someone very happy and has inspired a deep curiosity in me to learn more about this great baseball player who had a horrible reputation as a human being.  As I learned more, it became clear that his bark may have been worse than his bite.

Peppered into all of this is the philosophy of Steve Shama, which is to live his life one moment short of a tear.  In other words, this is not just about painting for me, or earning a little extra income; it is more about human connection and creating memories and moments that will last a lifetime.  When I look at the long list of people who have engaged with my Facebook page (Russell Thomas Art), the majority of them are strangers.  I think that is such a gift and I am so grateful and honoured.
Email Post