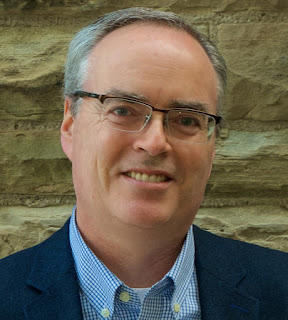 I discovered the brilliance of Terry Fallis during the 2011 CBC Canada Reads contest.  CNN journalist Ali Velshi was defending Terry's novel The Best Laid Plans and he caught my attention. Terry's first novel ended up winning Canada Reads and I ended up with a new favourite author. 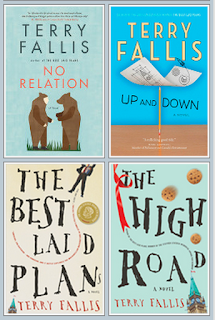 Each of his subsequent books have been excellent - The High Road, Up and Down, and No Relation.  Poles Apart, his fifth, will be released this fall. 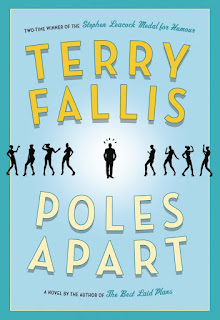 We were on vacation in Mexico when I first read The Best Laid Plans - I've read it several times since, sitting under the cabana and laughing out loud.  I can't say that I had laughed out loud with a novel before.  The sensation stuck.  Imagine my delight several years later, having passed along the book to my mother-in-law, hearing her laugh out loud sitting in our living room reading it.

At some point, I reached out to Terry on Facebook to share my appreciation for his literary gems and he generously accepted my invitation to connect.  He's been watching my artistic journey from the other side of the country and makes positive comments about my paintings from time to time.  He will never know what his kind words have meant to me. His external validation had a profound effect on my confidence and helped inspire me to continue. 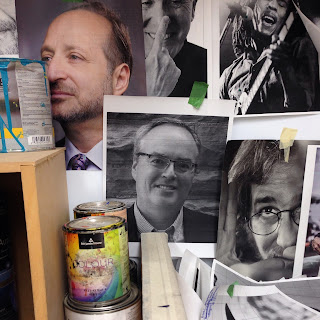 Terry changed his Facebook profile picture on June 29th, which I then printed and posted on my inspiration wall in the studio. I got it in my head that on my first day of my two-week holiday, I wanted to do something for me.  So, I started the day sketching out the 8-foot by 8-foot mural of Tom Morimoto, a project that I've been wanted to do for a long time adjacent to the mural of Elsie Yanik.  Unfortunately, it started to rain.  At that point, every bone in my body said it was time to paint Terry. 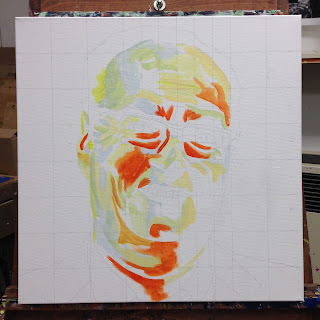 Once the painting started, things moved along quickly.  By late afternoon I was substantially complete except for the background, at which point I hit a wall and had to call in support. 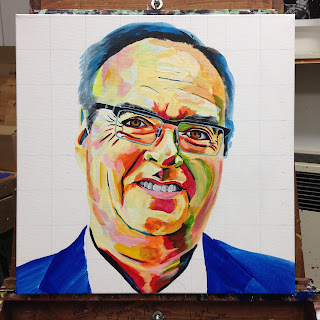 "Ben, I need your eye," I said to my 12-year-old son who was busy on his computer designing a cathedral in Minecraft - he's the real artist in the family.

He dutifully put his project on hold, came out to the studio, put his hand to his chin and looked intently at the painting.

"Yup," he said.  "Have it be lighter around the face, then darker as you go out."

He left, I grabbed the green and white, and set to work on the background. 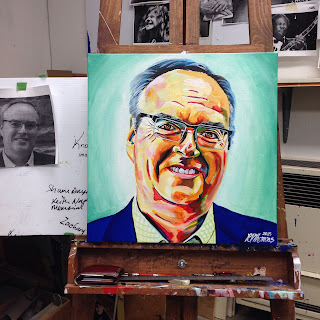 "Is this what you had in your head?" I asked, showing him the finished painting that I had posted on Instagram.

"That's exactly what I had in my head."

Terry saw the painting in the middle of the night here in Alberta, which was early in the morning where he is, on a northern Labrador cruise.  With sketchy WiFi service, it was a wonder he was able to see it at all.

"I'm deeply honoured," he wrote.  "I've never been the subject of a painting." 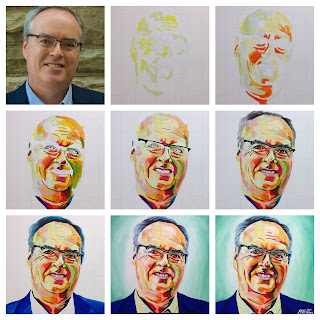 There is something special, in this day and age, about being immortalized in a painted portrait.  Maybe it's always been special, though one hundred years ago it was likely far more common.

I'm grateful for the literary gifts that Terry has shared with the world, and continues to share, and personally touched by his interest and encouragement with my art.