I was scrolling through Facebook Wednesday night when I saw a millisecond flash of Kevin Spacey.  I kept scrolling furiously while my phantom muse on my left shoulder kept poking me. 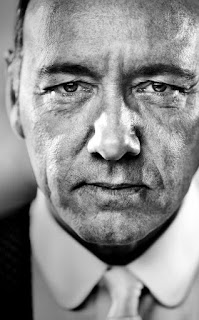 She was right.  There was something pretty remarkable in his expression and I knew that he needed to be my next painting.

I had been away from the easel for about four days while on our journey through Alberta.  I have this thing about coming back to the painting where I like to do a warm-up piece before diving back into the growing pile of commissions.  Doing Kevin Spacey as Frank Underwood - or F.U. as Matt Youens calls him - was the perfect choice.  I could see the composition of the piece almost immediately and knew that this would be a quick, broad brush stroke, type of portrait, which are always my favourites. The portraits of Jimi Hendrix, Finnigan (the dog), and Lionel Ritchie are great examples. 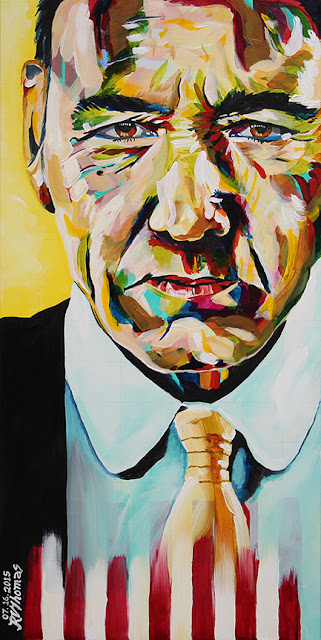 The painting turned out great, and probably would land in the top ten of my personal favourites of the 130+ portraits that I have done since starting this crazy creative adventure.  It is menacing and captivating all at the same time.  A few other people thought the same thing.  Enquiries about purchasing it came in as soon as I posted it.  It ended up going to a former Keyano colleague now living in Calgary.

I get flashes of inspiration from my muse all the time.  Outside of the odd project that is on a strict deadline, she manages what subject comes next.  She is always right.

Tonight I made good on the last contest I had on my Facebook page, doing a free 12" x 12" quick study.  Gerry Skowronski had won the contest a couple of weeks ago, but needed to take some time to mull over what to request.  In the end, Linda (his wife) got her way, and he requested that I do his portrait. 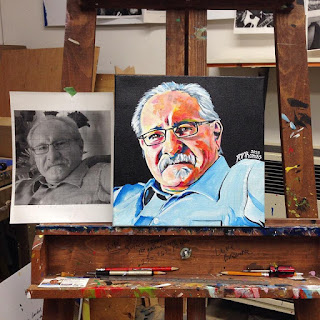 A former radio broadcaster, wine connoisseur, chef, poet and friend, Gerry and I have enjoyed many good visits together over a good cup of coffee, though not recently as he has moved south to Morinville. 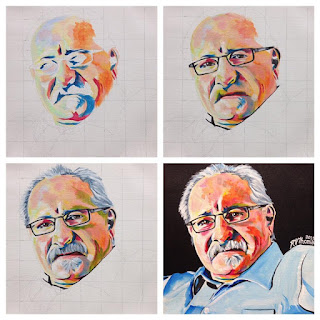 It was an honour for me to capture him as best I could.  I found him to be rather elusive, if I'm being honest.  He is a guy with a twinkle in his eye and smirk in his grin.  I struggled to capture that essence.  I think I came close in the end.

I have two more painting days before I return to work from a two-week holiday.  What will my muse suggest for tomorrow?  I'm not sure, but I have no doubt she'll let me know.
Email Post