I was listening to CBC Radio this weekend, a show about the power of art making.  I found myself really relating to the prison inmate talking about discovering painting and being asked by his incarcerated colleagues to do portraits of girlfriends, wives and children.

"I get to make something out of nothing," he said.  "And that something is always going to be there."

It's a way of looking at the process of making art in a refreshingly simple way.  I take an empty canvas and turn it into a famous person, a grandparent who has died, or a beloved pet.  Those creations - over 130 in the last year - are in businesses and homes throughout Fort McMurray, and in living rooms stretching from Vancouver in the west to Nova Scotia in the east.  It may seem like normal now, but it is anything but.

There was a large chunk of my life when I dreaded being asked by people to draw or paint a picture.  With the odd exception, I generally declined, as I felt this incredible pressure to produce with a complete lack of confidence that I would be able to do so.  I now get requests almost every day, and that pressure is gone.  Don't get me wrong; every project has a level of difficulty and an element of the unknown.  It's just that my fear has been overcome and my trust strengthened.

A client asked me to interpret the movie poster for Blow, featuring Johnny Depp and Penelope Cruz in seductive poses covered in money.  This was unlike any piece I had done before.  Not only was it new creative territory, it needed to be a large canvas, in this case 30" by 40".

I got the sense that the background would be my Achilles heel, so I attacked it first.  Using three shades of red, I flipped the canvas upside down and started doing these long vertical sweeps with my wide brush, going slightly darker as I got closer to the sides.  After the red was dry I flipped the canvas back to its normal orientation, then used steel wool dipped in water and paint (an idea I got in my sleep) and began applying the darker streaks going top to bottom.  The canvas that was empty now had this intensely interesting colour and texture. 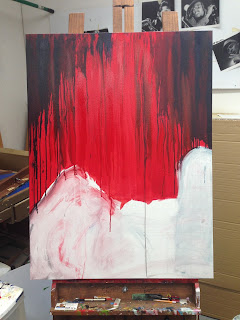 Starting with the background first feels like a risk.  The composition always seems to take longer to come together this way - this piece was started on Sunday and was finished on Wednesday evening - I don't normally have projects stretch over that many days.  However, this piece required patience and a heaping helping of trust that it would all work out.  I think it did. 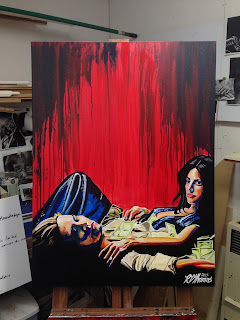 I have this thing that I do where I take an empty canvas, fill it with lines, colour, textures and characters.  I get to create something from nothing. I am an artist.