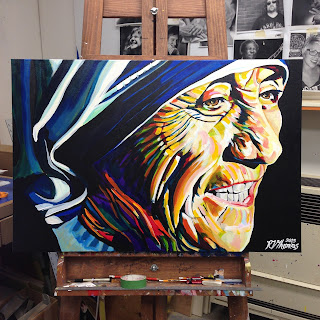 I painted my second portrait of Mother Teresa on Canada Day.  It was done specifically for the Salvation Army's Christmas in July event that happened last night at the Quality Hotel.  For their inaugural event, it went very well, with lots of silent auction items (too many to count) and something like 26 items in the live auction.

It was a little odd being at an event with festive decorations, Christmas trees and carols in the middle of the summer, but it worked.  The turnout was exceptional and the generosity abundant.

"Need knows no season," said Joan Nobles in her welcoming remarks.  No truer words have ever been spoken.

I was enlisted to not only paint a portrait, but also to do the live auction.  Let me say loudly and clearly that I am not an auctioneer.  Thank goodness Ben and I had watched multiple episodes of Storage Wars on our recent trip through Alberta.  You see, our family no longer has cable, so the only opportunity we get to watch classics like our favourite storage locker auction program is when we're staying in hotels.  We took full advantage.

Doing my best to stick handle the bids and keep the energy in the room up, I was really missing Ross Jacobs.  He was the charity auctioneer in this community for the better part of a decade.  He was the real deal; I am not.  The crowd was very forgiving of my shortcomings and spent a lot of money for a great cause.

The portrait of Mother Teresa sold for $1,200.  Dan Fouts of Stony Valley Contracting was the successful bidder.  A few items later, Mayor Hibbs came up to the stage and whispered in my ear that Mr. Fouts wanted to donate the painting back to the Salvation Army to either display or re-auction.  As the purpose of the event was to raise as much money as possible to help people in need, the decision was made to auction it off a second time.  It raised an additional $700 on the second go around and was purchased by Peter Read and Carna MacEacheran.

The painting was started and completed on July 1st, which also happened to be Carna's birthday.

"Well, this is just totally appropriate," she said.

There were a lot of great items and generous bids last night, strong representation from all three levels of government, and lots of support from businesses who purchased tables.  It was mentioned several times that owing to the state of the economy, the number of people and families needing help from the Salvation Army Community Services Centre is going to be higher than ever.   Last night generated a healthy sum of money to help meet those needs.