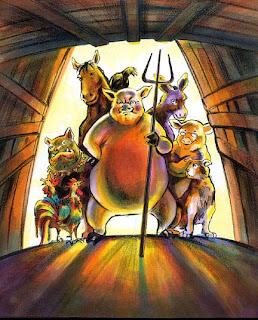 I wonder what George Orwell would have written if 1984 was 2010? Could he have imagined this world of iPods, iPads and Facebook?
In his allegorical Animal Farm, Orwell uses farm animals as archetypes to provide a powerful picture of communism. In watching tonight's council meeting on the streaming video provided on the municipal website, I wonder how Orwell would tell their story using farm animals?
I was particularly fascinated watching the pained expressions of the droopy donkey, slow speaking, perpetually puzzled. I kept thinking that someone needed to put the dear donkey out of its misery.
The haughty know-it-all-but-knows-very-little stallion is incredibly articulate, often referring to notes scribbled on the barn floor by the more literate pigs. This horse loves the sound of its own voice.
The passive aggressive friend-to-all goat is very careful not to say anything overtly negative, though the comments are consistently and every so carefully contrary.
I wonder what barn animal I would be, should I be so lucky to be let into the barn.
May 11, 2010 - 191.8 pounds, 28.8% body fat
Email Post